With the NYC Plover Project, Chris Allieri ’00SIPA is protecting local beach birds and encouraging humans to share the shore.

For most people who flock to the ocean each summer, the beach is a place to relax and unwind. Chris Allieri ’00SIPA, the founder and director of the NYC Plover Project, has bigger concerns than fun in the sun. A conservationist who advocates for the city’s piping plovers, Allieri and his small army of volunteers are working hard to protect this threatened species.

As natural snowbirds, so to speak, piping plovers spend winters in Florida and the Caribbean before migrating north to breed, nest, and raise their chicks. The small birds settle on beaches and typically stay throughout the summer. Before the Migratory Bird Treaty Act of 1918, piping plovers were hunted for their feathers and meat, but today they face new threats, including coastal development, beach erosion, and rising sea levels. “Beaches are getting more and more narrow, meaning the piping plovers have less space to build their nests and there’s less space for people,” says Allieri. “Of course there are going to be collisions.”

Today between 6,000 and 8,000 piping plovers remain on earth, with fewer than one hundred nesting in New York City. To protect the birds and raise awareness of their precarious status, the NYC Plover Project teams up with the National Park Service to patrol the beaches of the Rockaway Peninsula's western end during spring and summer. Volunteers politely approach beachgoers, point out nearby nests, and ask that they keep dogs away and refrain from entering closed-off areas. As a friendly gesture, the volunteers, all wearing blue T-shirts, hand out branded giveaways. “We’ve won over some of the iciest folks with our cute logo, temporary tattoos, and stickers,” says Allieri.

This spring, the organization, which operates a weekend stand at Jacob Riis Park, began installing signs and symbolic fences — metal posts strung together with fluorescent tape — to cordon off nests and avert pedestrian traffic. “It keeps the honest people out,” says Allieri. The nonprofit also plans to collaborate with local schools to educate children about conservation efforts.

Allieri, who is the founder of a communications firm for climate-focused technology startups in addition to serving as president of the Wild Bird Fund’s board of directors, says he wasn’t always an avian enthusiast. “When I was growing up, my father was really into birding, and we all thought it was a bit strange,” he says. But Allieri caught the birding bug in the winter of 2020. “Something happened. I saw a painted bunting in Brooklyn Bridge Park, and I couldn’t believe this brightly colored bird was right down the hill from my apartment.”

He purchased binoculars and a camera and, with the onset of the pandemic, took up a new hobby: observing regional birds and posting photos of them on Instagram. A day trip to Fort Tilden the following March directed his attention toward piping plover conservation. Although the plovers are federally protected and dogs are banned from select beaches during nesting season, Allieri noticed a disturbing disregard for rules among some visitors. “There were dogs off-leash chasing the plovers and people going up in the dunes and behind fence lines,” he says. “I realized I had to do something.” He got in touch with the National Park Service, and soon he was devoting much of his free time to plover stewardship.

Though Allieri acknowledges that it can be difficult to convince some members of the public of the importance of shorebird conservation, as a communications professional he knows how to get a message across. “You can’t yell at people or just say ‘Don’t go in that area. Don’t bring your dog.’ We start the conversation with ‘Did you know there’s an endangered species that nests here and the chicks are approximately two inches tall?’”

Allieri wants people to know that small actions can have a significant impact: “Follow the signs. Keep your distance. Carry out your garbage. Use less plastic,” he says. “Having an awareness that these beaches are living ecosystems makes for a more enriched experience. It’s not just about the sun and surf — this is somebody’s home. The piping plovers, they’re New Yorkers too. Why wouldn’t we do everything we can to protect them?”

Top Stories
You’re Not Imagining It: Seasonal Allergies Are Getting Worse
Lets Talk About Sex on YouTube
10 Travel Books to Feed Your Wanderlust
10 Uplifting Photos from Columbia’s 2022 Commencement
Second Acts: It’s Never Too Late to Go Back to School
All categories >
Read more from Julia Joy 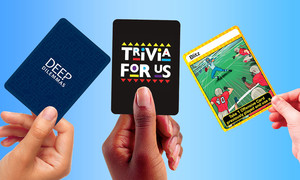 For icebreakers, gatherings, or family nights in