How America’s Business Press Missed the Story of the Century, edited by Anya Schiffrin '00JRN (The New Press). 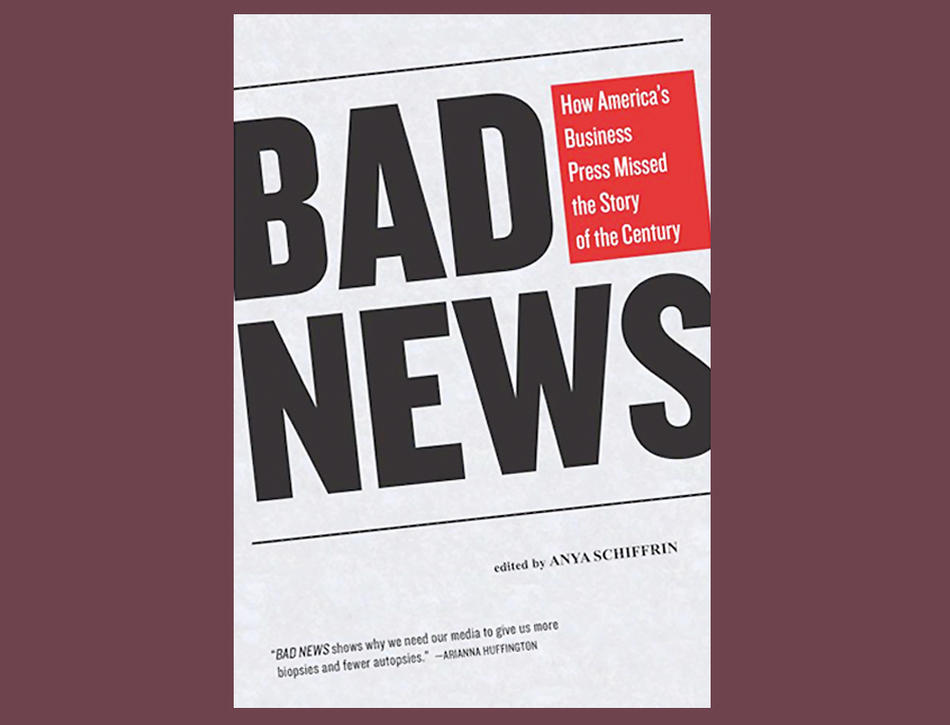 This April, the Pulitzer Prize for National Reporting was awarded to Jesse Eisinger ’92CC and Jake Bernstein of the nonprofit news organization ProPublica for exposing the exotic financial instruments that led to the most serious economic crisis since the 1930s. It was good and important work. And it’s no knock on ProPublica to wish such reporting had come years earlier. At such a late date, though, this wasn’t even “shooting the wounded,” as the old phrase has it. This was digging up the corpses to make sure they were still dead, then displaying their fetid, rotting carcasses in the village square.

Could journalism have done more to prevent the Great Recession rather than just explain it after the fact? Could the press have stopped the plague of mortgage-backed securities, collateralized debt obligations, and no-income, no-asset loans?

Those questions animate Bad News: How America’s Business Press Missed the Story of the Century. Edited by Anya Schiffrin ’00JRN, the director of the International Media, Advocacy, and Communications program at Columbia’s School of International and Public Affairs, the book draws on — among other things — a 2010 conference at Columbia and work published in the Columbia Journalism Review (CJR).

The provocative subtitle notwithstanding, the authors represented in Bad News do not uniformly agree that the business press missed the story. Even Dean Starkman ’84JRN, perhaps the most withering critic, writes that the press’s responsibility for the financial collapse is a lot closer to zero percent than 100 percent. Yet most of the authors indulge in the idealistic and perhaps naive view that the media should have done more, and that if they had, then at least some of the damage could have been forestalled.

Dueling essays by Starkman and Chris Roush, founding director of the Carolina Business News Initiative at the University of North Carolina at Chapel Hill, form the heart of Bad News. Starkman presents the results of a study he conducted for the CJR showing that in the early part of the last decade, when federal authorities were investigating predatory lenders, the media responded with tough coverage. But “sometime after 2003, as federal regulation folded like a cheap suitcase,” Starkman writes, “the business press institutionally lost whatever taste it had for head-on investigations of core practices of powerful institutions.” Rather than exposing malfeasance, Starkman adds, journalists gave us gooey features about such soon-to-be-infamous companies as Bear Stearns and Countrywide Financial, and consumer-oriented reporting on the looming housing bubble. The latter were of some value, he says, but fell well short of the investigative work needed to expose the dangerous and criminal practices inflating that bubble.

Roush, by contrast, looks back at the past decade of business journalism as an unalloyed triumph — an era that “produced more first-rate business journalism than any other decade since the creation of mass communications.” The problem, he argues, is that “the average consumer has not wanted to understand what the business media were telling them or simply chose to ignore the warning signs.” And he offers numerous examples of good and better-than-good journalism exposing the underlying causes of what would later become a full-blown crisis.

My sense is that both men are right, and both are wrong. Starkman correctly points out that the press was at its toughest when it was able to cover government investigations. But I disagree with the conclusion he draws — that the press, as an institution, should have been able to keep the pressure on after the government lost interest. In fact, without the day-to-day drumbeat of coverage made possible by official action, the media can only produce occasional enterprise stories that, no matter how good, tend to be treated as one-offs, with little lasting effect. That’s true even if those one-offs appear on the front page of the New York Times or the Wall Street Journal. As investigative reporter Seymour Hersh said at a 2003 panel discussion, “What makes stories possible is ‘Senator So-and-So says this and that.’” The media do not operate in a vacuum.

Meanwhile, Roush is right to point out the good work the media regularly produced in the years running up to the collapse. But he loses me when he writes, “Isn’t it the job of a journalist to present both sides of a story and to let the public — whether it’s investors, regulators, or consumers — decide what they want to believe?” Leaving aside his binary view of a complex story (“both sides”?), I would argue that it’s the journalist’s duty to uncover the truth, not to “present both sides” and let the poor, befuddled citizen figure it out.

“It’s . . . not enough,” Robert H. Giles ’56JRN and Barry Sussman write in the closing essay, “for news organizations to hobble themselves with a self-imposed fairness doctrine that gives space and time to disinformation.” But Roush is absolutely right that bad journalism always exists alongside the good. There was only so much effect that a well-honed, cautionary story in the Wall Street Journal could have in the era of CNBC and Squawk Box.

Fascinating though the Starkman-Roush debate may be, it is the wider-ranging essays that give Bad News its value. Both Schiffrin and Nobel Prize–winning Columbia economist Joseph Stiglitz point out that business reporters, no less than other reporters, depend on sources whose agendas may not be in the public interest. Stiglitz offers the toxic example of bond traders who inveigh against government deficits, and who would in fact benefit personally from the lower inflation and lower interest rates that smaller deficits would bring — a conflict that is rarely disclosed.

Ryan Chittum reminds us that journalists were called upon to cover the unfolding crisis at the very moment that the newspaper business was entering a steep decline. Peter S. Goodman emphasizes a fact we don’t hear nearly often enough: that the rampant borrowing of the past decade was triggered by the stagnant incomes of the middle class. Supporters of public media will be chilled by an account, written by Steve Schifferes ’94JRN, of calls for an investigation into the BBC, whose tough reporting was blamed by some — including media competitors, government officials, and financial houses — for helping to trigger the 2008 British banking collapse. It was, in some ways, a preview of the American Right’s attack on NPR, though on a much larger scale, given the BBC’s outsize role in British journalism.

Did America’s business press miss the story of the century? The evidence in Bad News suggests that the answer is no. The problem was that the hollowness at the core of the housing market, though well reported, never became the consensus view, never got the sort of repetition on the network newscasts, on the cable news shows, on talk radio, and elsewhere that would have been needed to make a real difference.

That’s not a shortcoming of journalism so much as a commentary on human nature. Too many of us wanted to believe, and we did until it was too late.

Top Stories
You’re Not Imagining It: Seasonal Allergies Are Getting Worse
Lets Talk About Sex on YouTube
10 Travel Books to Feed Your Wanderlust
10 Uplifting Photos from Columbia’s 2022 Commencement
Second Acts: It’s Never Too Late to Go Back to School
All categories >
Read more from Dan Kennedy