Book Review: “The Body Builders: Inside the Science of the Engineered Human” 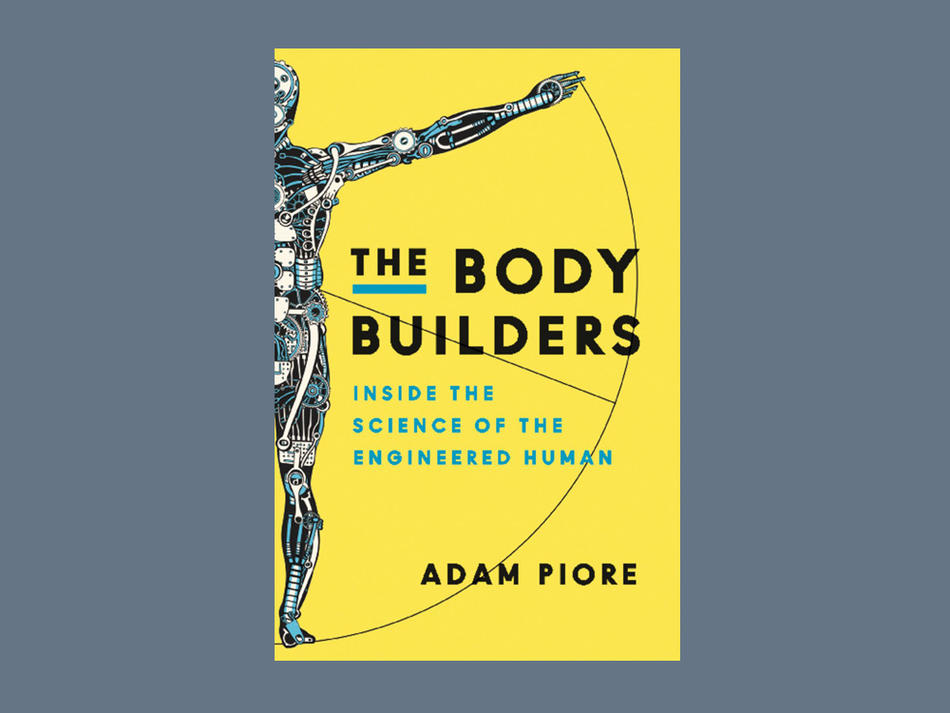 Technological interventions that can transform the body and mind beyond its “natural” state have in recent years become not just feasible but commonplace. Bioengineering is largely being used to help patients suffering from disease or disfigurement — for example, bionic prosthetic legs for amputees — but the possibilities are endless, and they bring with them a complex set of ethical questions. As Adam Piore ’94JRN puts it in his enthralling new book, The Body Builders: Inside the Science of the Engineered Human, “Why not build better versions of ourselves? Why not enhance, augment, transcend? Why not see how far we can push it?”

Piore, a journalist who has written about medicine and technology for Newsweek, Popular Science, and MIT Technology Review, blends deft reporting and fluid storytelling to explore the science behind this “quiet revolution,” which, he says, is moving faster than most had anticipated. In three sections covering different types of bioengineering, Piore profiles both pioneering researchers and some of the patients who have been helped by this technology.

In the book’s first part, “Moving,” Piore highlights the techniques that scientists use to restore mobility, from ultrasophisticated prosthetics to the regeneration of amputated limbs. “By hacking into the body itself and rewriting or redirecting the body’s cellular instruction manual,” he writes, “scientists are coercing the body to rebuild or transform.”

Part two of Piore’s book, “Sensing,” covers new avenues of research that challenge long-held assumptions about neuroplasticity. Piore meets a woman who has recaptured her ability to “see,” through a computer program that converts pixels of visual images into patterns of sound. This remarkable circumvention of her eyeballs suggests that “for decades scientists have perhaps missed the point . . . To restore ‘sight’ or sound, all engineers need to do is create a device that can translate sensory information into signals that can be conveyed into the brain in a consistent manner.” The brain can then rewire itself to form new processing pathways.

New insights into the brain’s circuitry also reveal mechanisms underlying some of the more ineffable aspects of being human, such as intelligence and creativity. In part three, “Thinking,” Piore meets with researchers developing ways to boost brainpower with a pill, or to correct rogue neurons by implanting electrodes deep in the brain. As with genetic engineering, the potential to cure mental illness and alter behavior by changing the brain’s biochemistry is staggering; but the possibility that the technique might be manipulated for more nefarious means looms large.

Piore is clearly in awe of all these advances in human engineering, but he remains acutely aware of the larger ethical issues they provoke. He presents the crucial questions in every chapter — for example, should we be able to use this technology for self-enhancements like superhuman strength or musical talent? — but largely lets readers draw their own conclusions about where the lines should be drawn. Despite these ethical caveats, Piore presents his material with contagious enthusiasm. Reading the book, it’s hard not to feel hopeful that science may soon be able to profoundly help patients with a range of debilitating conditions. That we may someday have the option to ascend to new mental and physical heights seems inevitable, and Piore provides a welcome guide to this future.