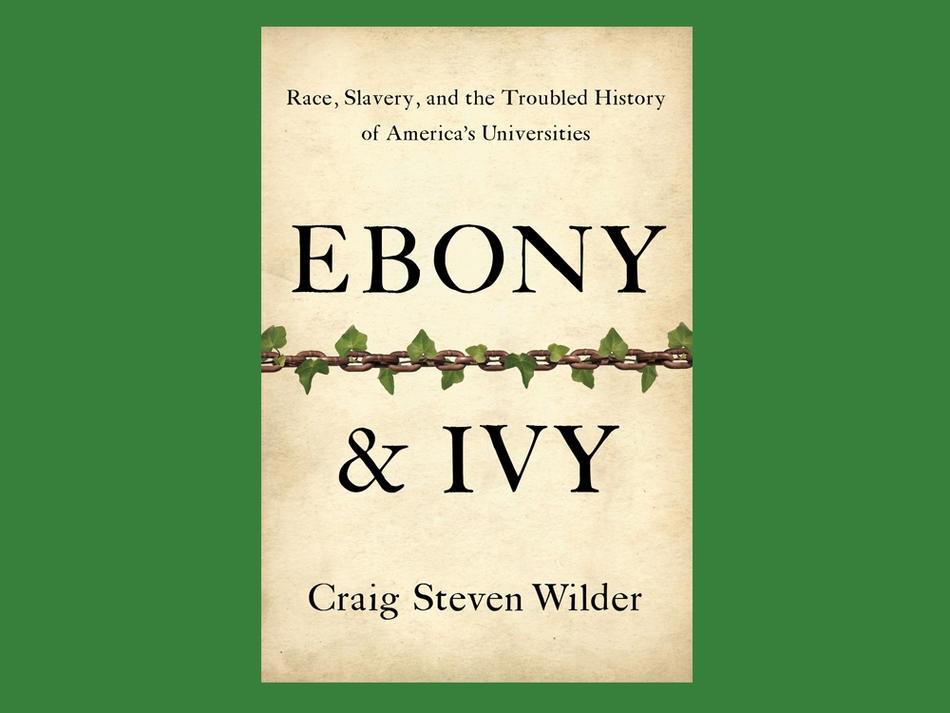 The connection between slavery and the early histories of some of America’s most elite colleges and universities has long been known, and came to particular prominence after 2003, when Brown University’s president, Ruth Simmons, commissioned a committee to pursue the subject. But the general public has largely remained in the dark. With his eye-opening book, Ebony and Ivy: Race, Slavery, and the Troubled History of America’s Universities, MIT history professor Craig Steven Wilder ’94GSAS seeks to change that. He argues that some of the nation’s oldest institutions, Columbia included, played a major role in the extermination of indigenous populations and the enslavement of people of African descent from the seventeenth through the nineteenth centuries. Furthermore, the establishment and growth of these institutions were dependent on wealth accrued from the Atlantic slave trade and slavery, while their professoriates and administrations provided intellectual cover. This book is nothing short of an exposé of what we would today call higher education’s historical crimes against humanity.

Some of the earliest colleges in the British American colonies — Harvard, the College of William and Mary, Yale, the College of New Jersey (Princeton), and Codrington in Barbados — were, in Wilder’s words, “instruments of Christian expansionism” and British imperialism. While these colleges and their promoters used the promise of educating and Christianizing the native population to fundraise at home and abroad, in fact, they contributed to the decimation of Native American nations and the aggrandizement of their lands for profit, with some colleges, such as Trinity and Williams, receiving substantial chunks themselves. John Eliot’s “praying towns” in Massachusetts, designed to convert Native Americans to Christianity, were rapidly replaced by university buildings dedicated as “Indian colleges,” where a handful of native students were consigned to elementary education. Indian missionary the Reverend Eleazar Wheelock, the founder of Dartmouth, was one who followed this path of tokenism: fewer than twenty native students graduated from Dartmouth in two centuries, despite significant funding. At the same time, Wheelock’s students and faculty, like many of their compatriots, proved eager to make war on Indian nations and cultures, as conflicts with the Iroquoia escalated in the late 1770s.

The expansion of American higher education in the eighteenth century, Wilder argues, coincided with an economic boom in merchant capitalism, which rested on the twin pillars of the slave trade and slave labor. King’s College (Columbia), Queen’s College (Rutgers), Brown, and Princeton were all established with the profits of human bondage. Slave traders financed endowed chairs and became trustees, and colleges made a special effort to recruit the sons of a wealthy slaveholding colonial elite. Colleges such as Washington College (Washington and Lee) and William and Mary even held slaves and advertised them for sale or hire; one particularly disturbing trend that Wilder uncovers was the abuse of these college slaves in undergraduate pranks.

Just as damning, Wilder writes, was the indispensable place of American academics and intellectuals in the development of the pseudoscience of race. The new science of man and the Enlightenment mania for cataloging the human species in a hierarchical scale of beauty, intelligence, and nature fed on the raw material provided by colonial scholars. The scalps, skulls, and skeletons of Native Americans and African slaves became “human curios” collected and displayed by museums and scientists in Europe. Their bodies also proved to be ready and easily exploitable sources for the study of anatomy and medicine at the new medical schools at Columbia, Penn, and Dartmouth. As Wilder perceptively remarks, “White people’s unlimited access to the bodies of slaves could hardly be thought to cease at death.” As science displaced religion as the arbiter of universal truths, American universities became bastions of scientific racism. Thomas Jefferson, founder of the University of Virginia, among many others less famous, speculated in theories of racial inferiority that provided a seemingly objective defense of slavery against abolitionists and other alleged extremists. Nor was this a regional issue, as later historical accounts might have us believe. Southern pro-slavery race theorists were trained in Northern academies, and in the North itself a slew of scientific racists contributed to the intellectual defense of slavery.

This trend continued in the nineteenth century, when college administrations proved to be ardent supporters of the American Colonization Society, founded in 1816, which proposed to repatriate all free black people back to Africa. Colonizationists, a few of whom initially hoped to end slavery, became some of the staunchest opponents of American abolitionists and their commitment to racial equality. Students and faculty who dared to join the abolition movement faced censure and even dismissal. Wilder recounts the case of Charles (Karl) Follen, a German professor at Harvard in the 1830s, who was made to resign his position in part due to his active participation in the abolition movement. Even after the Mexican-American War ended in 1848, when antislavery sentiment permeated Northern society, many universities remained politically conservative and committed to furthering this kind of social hierarchy. Wilder could well have added that the Massachusetts abolitionist senator Charles Sumner, a favorite of Supreme Court justice Joseph Story, was denied his mentor’s position at Harvard Law School, and the accomplished black abolitionist Martin Delany was thrown out of Harvard Medical School, because of white students’ complaints. The university later erected a statue of Sumner after his death that still graces Harvard Square.

Ebony and Ivy is the unsettling and immensely important story of the American academy’s racist past. It’s a magnum opus for Wilder, who was awarded the Columbia University Medal of Excellence in 2004, at the university’s 250th anniversary Commencement. Rarely does a work of historical scholarship have the potential for making such a tremendous impact on our current debates over race and inequality. Judging from the broad coverage Wilder’s book has received in the press, that impact is already beginning to be felt.

Top Stories
Book Review: Horse
Can the World’s Religions Help Save Us from Ecological Peril?
What Declassified Government Documents Reveal About America’s Dark Secrets
The Pacifist's Guide to Satanism
Learning to Live with the Voices in Your Head
All categories >
Read more from Manisha Sinha ’94GSAS