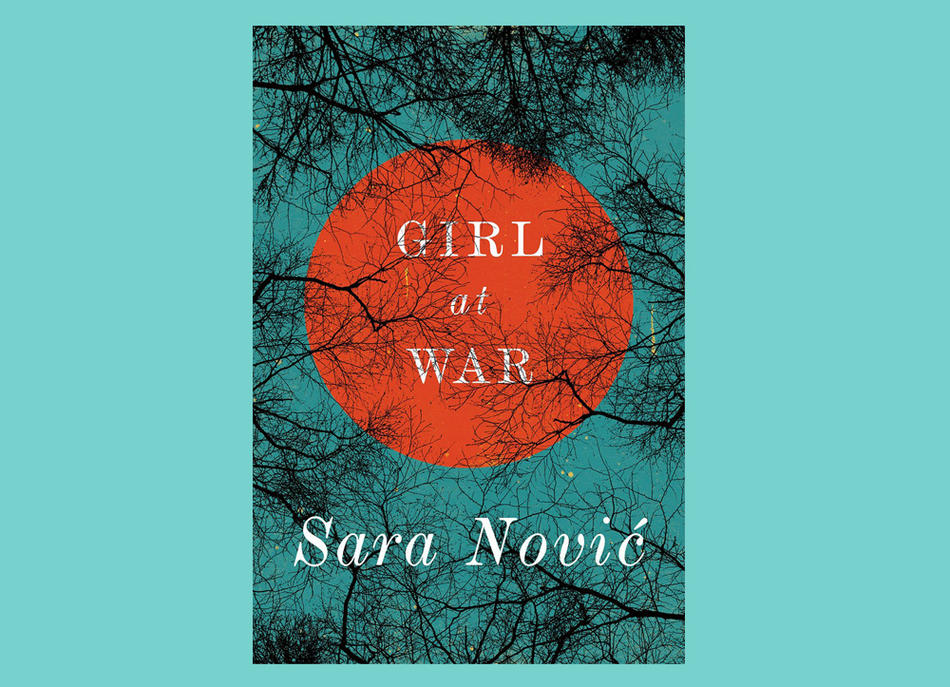 A young woman stands before a group of UN delegates, delivering a speech about human­ rights violations during the Yugoslavian Civil War. The delegates, she knows, are “thirsty for gore,” and as she talks, images of teenage girls “sporting camouflage and scuff­-marked assault rifles” flash on the screen behind her. “Who had taken these pictures, I wondered ... Must have been journalists, a breed of people I still couldn’t understand. Outsiders who claimed the moral high ground, then stood back and snapped photos during encounters with bloodied children.” Ten years earlier, the speaker, Ana Jurić, had been one of these children, a Croatian girl with a gun caught in a conflict that would destroy her country. What happened to that girl, and how it haunts the woman she grows up to be, is the premise of Girl at War, the remarkable debut novel by Sara Nović ’14SOA.

When we first meet her, Ana is a tomboyish ten-year-­old, riding bikes in Zagreb with her best friend, Luka, and laughing at the red-­faced Serbian leader Slobodan Milosevic on TV. Then war breaks out between Serbs and Croats, and soon she is helping her father tape up the windows and begging their apartment complex’s one Serbian resident to blacken his windows during air raids. When Ana’s younger sister, Rahela, develops kidney disease, Ana’s family takes a risky trip across the border to Bosnia to deliver Rahela to a medical mission that will transport her to the US for treatment. They make it to their destination, but on the return journey are stopped by Serbian soldiers, who demand their papers. “Giving up our IDs would provide the soldier with the greatest weapon against us: the knowledge of our names. Our last name, specifically, the one that carried the weight of ancestry, ethnicity.” The soldier forces the family out of the car, and Ana’s life as she knows it ceases to exist.

Next we flash­-forward to Ana ten years later, a college student in New York in the aftermath of 9/11. It’s jolting, but effectively so — a jolt that mirrors, as we come to find out, her transition to American life. She’s learned to evade most questions about her past, and only confides in a professor, who then gives her the novels of W. G. Sebald. Unlike many of the Americans she encounters, who are at once repelled and morbidly fascinated by her experience, Sebald understands the longing for a place that no longer exists, the sense of permanent homelessness that makes it impossible for Ana to feel truly at ease in her adopted country. But reading Sebald causes Ana to fear that memory may be porous and malleable, and that even photographs, like the ones of the girl soldiers, can’t tell the full story of a country or a war; only people can do that. Ana agrees to testify at the UN about the atrocities that her family endured. Afterward, she impulsively decides to return to the former Yugoslavia, in search of Luka and answers about her past.

Nović, who is approximately the same age as Ana, lived in Croatia after Milosevic’s death, and the scenes of Ana in modern-­day Croatia are among the most impressively rendered in the book. The writer deftly describes the experience of being both native and foreigner; the way the country itself is struggling to forge a new, post-­Communist identity, borrowing from the West and its own past. A nightclub is filled with “cigarette smoke and the pounding rhythm of some remixed hip-­hop song that had been popular last year in America”; the locals have Coke and cell phones but still distrust air conditioning, so swelter in the summer humidity, watching Walker, Texas Ranger on TV. Being back is both comforting and disorienting, and Ana realizes that while she may never be fully American, she is no longer entirely Croatian, either: as a result of the war and its aftermath, “Croatia was a country to which, technically, I’d never been.”

Talking to her professor about why she admires Sebald’s writing, Ana says she likes “that he can describe an emotion so perfectly, without any adjectives.” Nović attempts the same in her novel, and largely succeeds. Ana is unsentimental to the point of stoicism, and the descriptions of the worst of what she goes through are brief, understated, and matter­-of-­fact. Memories, pictures, and words may never fully convey, let alone make up for, what she lost, but in Girl at War, Nović does a remarkable job of describing the shape of the hole.

Top Stories
Book Review: Horse
Can the World’s Religions Help Save Us from Ecological Peril?
What Declassified Government Documents Reveal About America’s Dark Secrets
Is Objectivity in Journalism Even Possible?
Learning to Live with the Voices in Your Head
All categories >
Read more from Jennie Yabroff '06SOA