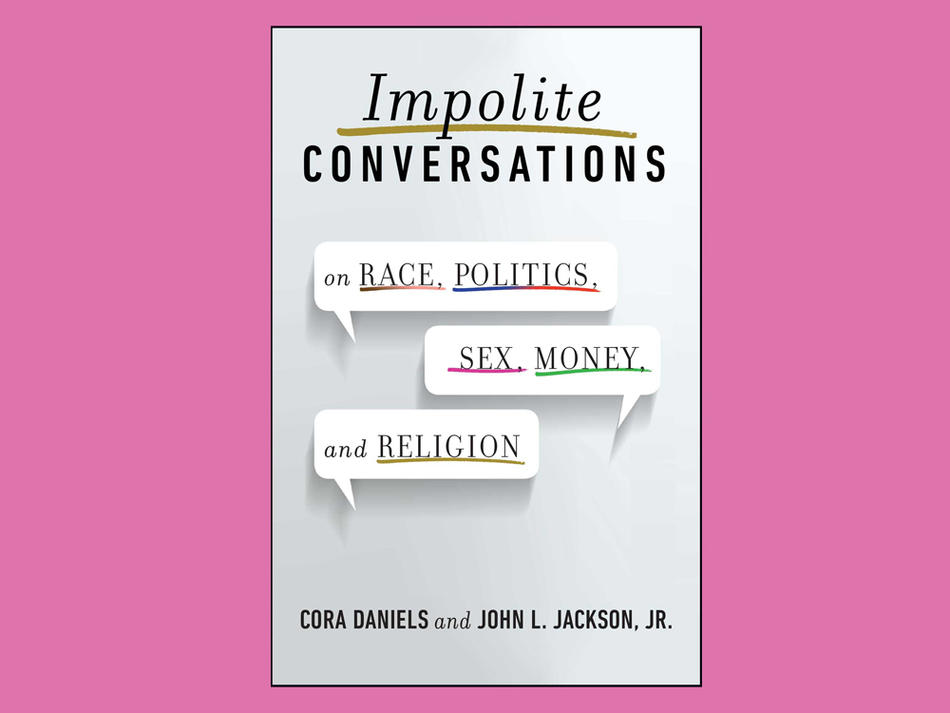 As police killings and protests dominate the headlines, I’ve had many candid discussions about race with my inner circle. But with other friends, I’ve avoided the subject entirely, instead trusting Facebook and Twitter to shed light on their views. Impolite Conversations challenges us to put down our devices and communicate more directly and honestly on topics that are generally considered off-limits.

Journalist Cora Daniels ’94JRN and cultural anthropologist John L. Jackson Jr. ’00GSAS lead the way in this effort with alternating essays on, as the subtitle suggests, “race, politics, sex, money, and religion.” Rejecting the point-counterpoint format, Daniels and Jackson stage not a debate but rather an open dialogue. When, for example, Daniels dissects the myth of social mobility and how it particularly affects African-Americans, it doesn’t seem strange that Jackson responds with musings on his disdain for jazz (really more a disdain for class warfare between middle- and lower-class blacks). These shifting topics successfully mirror what Jackson and Daniels call “a natural conversation.” At times, reading their honest, passionate, and often personal exchanges feels like eavesdropping.

As Daniels and Jackson share their views, they also give us a glimpse into their lives. Consider Daniels’s argument in favor of a less confined, more straightforward attitude toward female sexuality. She closes her point by admitting that unlike many parents, she doesn’t dread the day her daughter will have sex. Instead, this mother of two hopes her daughter will have “enjoyed an orgasm before her wedding night.”

That Daniels and Jackson can’t discuss sex — or politics, money, or religion, for that matter — without also discussing race suggests that at its core, Impolite Conversations is about race relations in America. Written just after George Zimmerman was acquitted of all charges in the murder of Trayvon Martin, this collaboration is strikingly timely. Jackson’s musings on how difficult it is for black men to “negotiate exchanges with ‘the law’ — even to survive them,” seem to point directly to Eric Garner and Michael Brown. And yet they manage to thoughtfully address serious subject matter without letting tragedy overshadow their ideas. Jackson deserves much of the credit for this, as he skillfully inserts satire and humor throughout their talks. One of many funny lines comes in the section on religion, when he notes that even black porn stars winning awards begin their speeches by thanking Jesus.

Though at times over-the-top, their deliberate provocations — see section titles like “Are black people still overchurched?” and “Obama makes whites whiter”— are thought-provoking even, or perhaps especially, if you disagree. Some might take issue, for example, with Daniels’s opinion that even black people should not use the word “nigger,” or her assertion that the one-drop rule still defines black identity today. Still, Daniels and Jackson succeed in the mission they set out for themselves in their introduction: creating a frank discourse that digresses and lulls at times, but keeps you engaged.

In spite of this, I can’t help but wonder if Daniels and Jackson fall short of one of their most critical goals — to encourage people to speak with one another across racial, ethnic, and ideological lines. I concede that the “problem of race in America starts with the fact that most people’s most intimate relationships are racially homogenous.” Ironically, the authors reinforce this notion as two successful, Ivy League-educated black people, who have been friends for more than twenty years. As a black woman guilty of discussing the book mainly with black friends, I share Daniels’s fear — notably expressed to Jackson via text message in the book’s conclusion — that people won’t read Impolite Conversations “because they think it is just about black folks.” That would certainly be a shame, since it is such a candid and thorough discourse on subjects that affect us all.