Book Review: "The Laws of Medicine: Field Notes from an Uncertain Science" 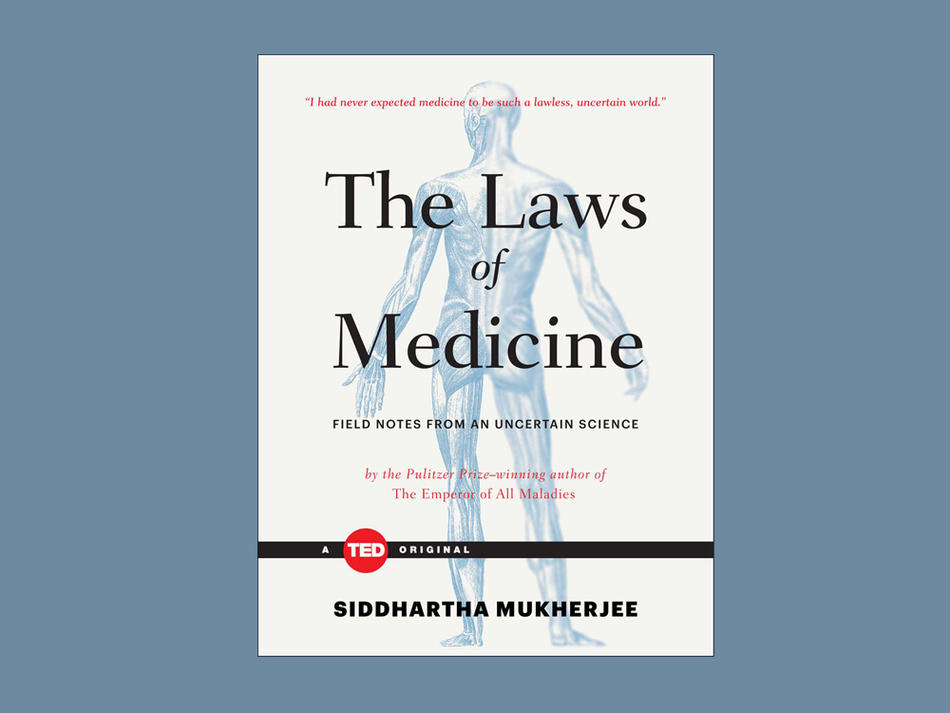 Modern medicine derives its mystique from dramatic cures: consider the miracle of defibrillating someone in cardiac arrest or injecting insulin to restore metabolism in a child with type 1 diabetes. Yet medicine is not a straightforward science, and most treatments are far from home runs, writes Columbia hematologist Siddhartha Mukherjee in his new book, The Laws of Medicine. Often, doctors and patients have to make complex decisions using imperfect information based not on facts but “the spaces that live between facts.”

And the facts are multiplying. According to a recent study, a primary-care physician would need 627.5 hours per month to keep up with the current volume of new medical research. This core problem animates Mukherjee, and his short book proposes three “laws” to tame the deluge of information.

According to Mukherjee, who won a Pulitzer for his last book, The Emperor of All Maladies, these laws acknowledge that medicine is an uncertain and imprecise discipline, and that equations or numbers cannot always explain its outcomes.

Mukherjee asks us to imagine medicine as a “machine that modifies probabilities.” You give it an input probability — a patient’s medical history or a test result — and it furnishes an output probability. You give it garbage, it returns garbage. The first law of medicine is to avoid feeding the machine garbage and to accept that “a strong intuition is much more powerful than a weak test.”

To illustrate his point, Mukherjee tells the story of meeting a dignified fifty-six-year-old man, from a tony Boston neighborhood, who was suffering from weight loss and fatigue. Mukherjee suspected cancer and performed several tests on the patient without result. In retrospect, he says, he was shoveling garbage into the machine. One day, by chance, he spied the patient in the hospital lobby, speaking with another patient who was a known drug addict. Suddenly the answer became clear: Mukherjee’s patient was a heroin user. Into the machine Mukherjee now fed a much more useful probability in the form of a specific blood test, and the solution came immediately. The man was suffering from AIDS. The answer was unlocked by simply getting to know the patient better.

Mukherjee’s second law of medicine is that there will always be patients who beat the odds, and they hold important lessons. “Medicine is in the midst of a vast reorganization of fundamental principles,” writes Mukherjee. The outliers “point to systematic flaws in our understanding.”

In one example, Mukherjee delves into the work of oncologist David Solit, who analyzed the strange case of “patient 45,” who miraculously responded to an experimental drug for bladder cancer (patients 1 through 44 weren’t as lucky). Solit studied the cancer tissue and discovered an unusual genetic marker that could identify which future patients could also be helped. The patient’s tumor had a “hidden, inner logic,” and its “selective vulnerability” opened a new series of scientific investigations.

Mukherjee’s final law admonishes us to understand that “for every perfect medical experiment, there is a perfect human bias.” As Mukherjee warns, countless biases pervade the medical literature, even when studies have been randomized and controlled to eliminate prejudices.

In the face of this uncertainty — buffeted by bias, buried in information, beset by outliers — doctors must rely on their own judgment, case by case, Mukherjee writes: “The medical revolution will not be algorithmized.”

Still, Mukherjee’s paean to managing uncertainty gives short shrift to the power of standardization. There is certainly truth to the argument that medicine is so complicated that it resists algorithms and demands intense personalization. But today, a massive body of literature shows the dramatic life-saving impact of protocols, checklists, and standards. To take only one example: standardized treatment protocols made possible by electronic medical records in parts of California have basically eliminated uncontrolled high blood pressure among these patients, saving lives. That medical revolution was certainly “algorithmized.” One can have the courage to stand apart but also be wise enough to stand together when necessary. The hard part is being able to tell when to go your own way and when to follow the pack.

Darshak Sanghavi is a health-policy official in the federal government and a professor of pediatrics at UMass Medical School.

Top Stories
Book Review: Horse
Can the World’s Religions Help Save Us from Ecological Peril?
What Declassified Government Documents Reveal About America’s Dark Secrets
Is Objectivity in Journalism Even Possible?
Learning to Live with the Voices in Your Head
All categories >
Read more from Darshak Sanghavi