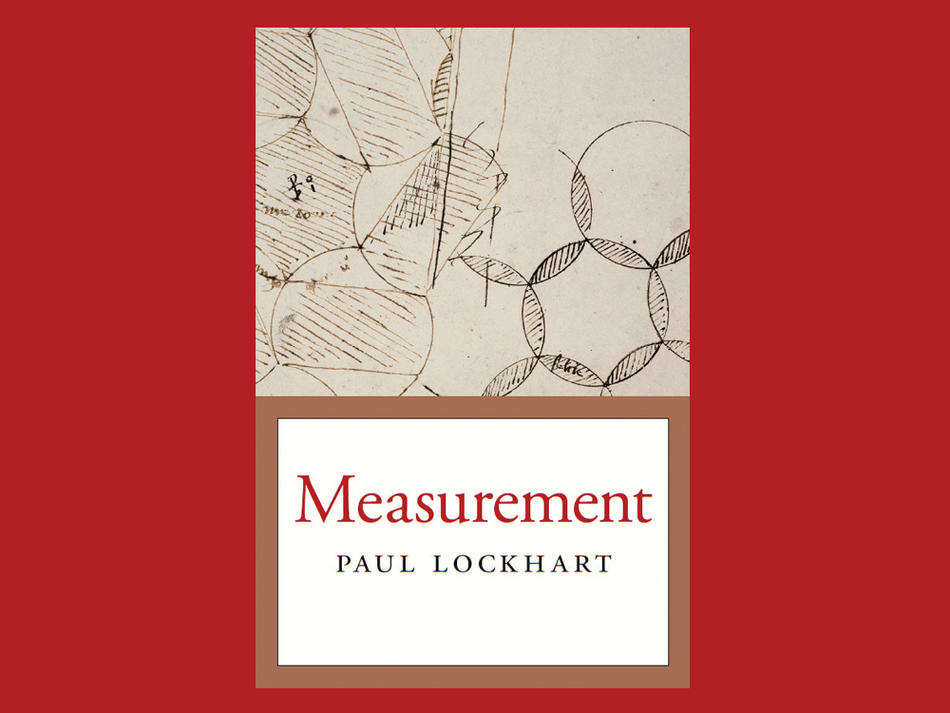 Draw a triangle. Go ahead: I’ll wait. Now draw three more lines, each connecting one corner to the center of the opposite side. If your drawing is precise enough, you will find that the three new lines appear to cross at a single point in the interior of the triangle. But do they really? If so, why? And how could you prove that you didn’t just draw a lucky triangle? These questions are the subject of the first exploration in Paul Lockhart’s Measurement, a book about the joy — and difficulty — of mathematical discovery.

Measurement is not just for those who think of themselves as mathematically inclined. Lockhart ’90GSAS, a mathematics teacher at Saint Ann’s School, in Brooklyn, starts with basic facts about geometry and invites even mathematical novices to join his journey through rigorous mathematical arguments. Many popular books and articles aim to tie mathematics to everyday life: calculus is used to study income inequality, game theory explains international politics, and limits are used to figure out compound interest. Lockhart takes a different approach. To him, mathematics is an alternate world, a theoretical realm filled with impossibly perfect forms. Shapes inhabit a sort of Platonic domain: the circles he cares about are ideals, all the infinitely small points exactly the same distance from the center. But in the real world, even a “circle etched in gold by a laser to within a billionth of an inch” falls short of that ideal. It’s made of atoms that aren’t infinitely small. The atoms all have size and weight, and if that weren’t enough, they won’t stop jiggling around.

The first part of Measurement, “Size and Shape,” is about the geometry most people studied in high school. Lockhart reintroduces readers to polygons, circles, and three-dimensional forms, and helps them learn how to ask and answer questions about these abstract objects. He cleverly derives the volume formula for a special kind of pyramid, for example, and then uses previously discussed ideas about deforming shapes to show how to generalize the formula to all pyramids. He leaves readers with a similar question about an octahedron, another three-dimensional form, allowing them to apply the same logic to a new problem. In part two, “Time and Space,” Lockhart sneaks into calculus, slowly revealing its power to the reader. Along the way, he shows how multiplication signs, exponents, and other sometimes off-putting mathematical symbols make reasoning easier. In both sections of the book, simple line drawings provide real help in following Lockhart’s reasoning.

At one point, Lockhart steps back to reflect upon the ways the human perspective has shaped mathematics. Take the tangent property of ellipses. An ellipse is a circle that has been stretched in one direction (horizontally, vertically, or somewhere in between). There are two special points in the interior of the ellipse called the foci. If the ellipse were a pool table and you put a pocket at one focus, a ball hit from the other focus in any direction would ricochet off the wall into the pocket — an effect of the tangent property of ellipses. (To understand why, you’ll have to read the book.) But the property breaks down at very small and very large scales. For example, if the pool table were only a few hundred atoms wide, “an atom-sized ball would simply fly through the gaps in the wall or get involved in some complicated electromagnetic interaction with it.” But a galaxy-sized pool table wouldn’t work, either, “due to gravitational and relativistic effects.”

“To be like a geometric thing,” Lockhart observes, “a real thing has to be the right size; namely, it has to be about our size ... Why? Because we’re the ones who made up the mathematics!” He goes on to postulate that our formulation of geometry would be radically different if we were the size of atoms or galaxies.

Lockhart emphasizes over and over that math is about exploration, not rote computation. He does not expect the reader to sit back and watch him have all the fun. He explains mathematical arguments thoroughly and precisely and then leaves questions in bold for the reader to tackle herself. To get the most out of the book — to learn and practice mathematical reasoning — a pencil and paper are required, especially for those who are new to creative thinking in math. Even those who are well-versed in the topics he presents will enjoy turning off their prior knowledge and trying to solve problems using only the theory in the book.

“Mathematics is a meeting place for language, pattern, curiosity, and joy,” writes Lockhart toward the end of Measurement. “And it has given me a lifetime of free entertainment.” A reader who wants to learn more about the pleasure of doing mathematics will find much to explore here.