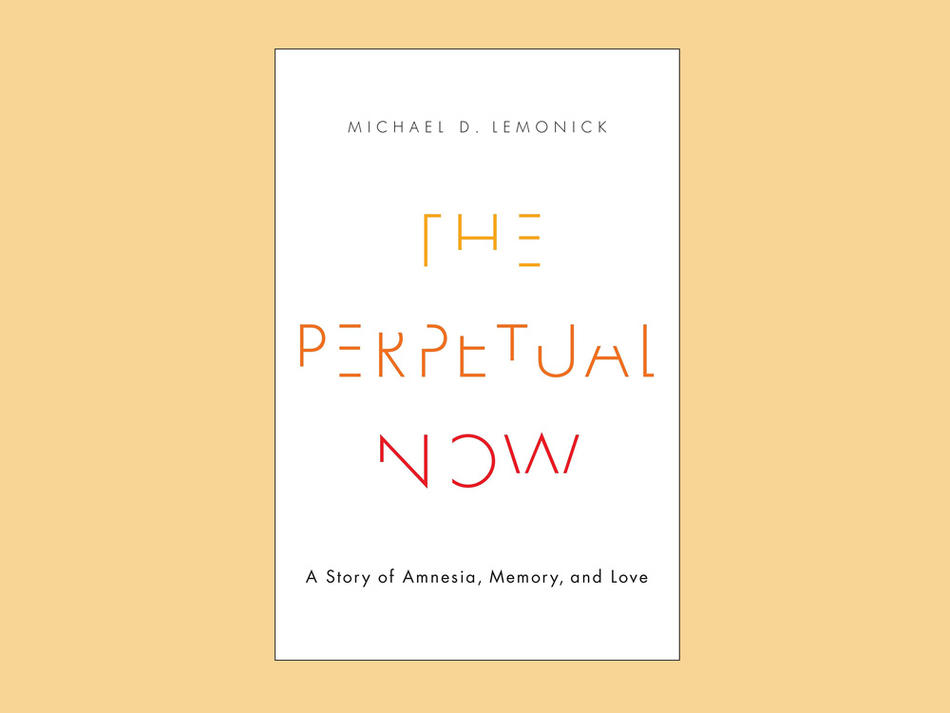 Lonni Sue Johnson doesn’t remember her wedding day. She doesn’t know where she grew up or whether she went to college, and she wouldn’t recognize a lifelong friend if she saw her on the street. She has almost no memories of the past and is virtually incapable of making new ones. In fact, if you met her, she’d cheerfully reintroduce herself every ten or fifteen minutes.

Since 2007, Johnson — previously a successful illustrator known for her New Yorker covers — has been severely amnesic, a condition triggered by a violent bout of viral encephalitis. Amnesia is used frequently as a plot device in novels and films, but long-term, real-life cases are rare. In The Perpetual Now, Scientific American opinion editor Michael D. Lemonick ’83JRN interweaves Johnson’s tragic personal story with a light summary of the scientific community’s decades-long investigation into the neuroscience of memory.

Lemonick, who has casually known Johnson’s family since high school, writes affectingly about her personality and what has remained constant about her. Remarkably, despite the significant obstacles that Johnson’s condition presents, she remains highly optimistic, even joyful. To Johnson, everyone is a stranger, which seems like a terrifying way to navigate life. But Johnson copes by treating everyone like a friend: “She’s having a blast, and she wants you to join her,” Lemonick writes.

For neuroscientists, Johnson is a rare and important case. Lemonick helps the reader understand this by providing a general overview of the relevant researchers of the past century (William James, Sigmund Freud, Santiago Ramón y Cajal, Columbia professor Eric Kandel). He also profiles landmark patients — mainly Henry Molaison (1926–2008), or “H. M.,” as he was known during his lifetime, whose brain damage “would ultimately do more to answer [questions about memory] than any other single event in the history of neuroscience.”

In the cases of both H. M. and Johnson, the area that received the most damage was the hippocampus: “brains-within-a-brain” that “help us transform the chaotic jumble of sensory impressions that pour into our brains at every minute into a comprehensible whole.” In other words, the hippocampus helps translate external cues such as sights, smells, thoughts, or feelings into memories, and it holds a “backlog of partially processed memories.” Before H. M., scientists knew next to nothing about the hippocampus (it was thought only to regulate smell). Now, Johnson’s case “promised to answer a whole new set of deeper, more complex questions.”

Researchers at Johns Hopkins, Princeton, and elsewhere have focused their attention on Johnson’s three main loves in life: art, music, and aviation. In these areas, Johnson has shown the most progress in recapturing her skills, even if in altered forms. She can still play her viola and improves each time, even without remembering that she has played before. Her impulse to create art has returned and “showed at least some elements of her pre-encephalitis work.” She can also describe in detail not only the mechanics of piloting a plane but the exhilarating feeling that it once gave her. In other words, she has retained more memories in areas where she had unusual talent or knowledge, a finding that scientists find especially interesting.

Lemonick’s conversational storytelling is reminiscent of Oliver Sacks, who once visited with Johnson but decided not to write about her. The author poignantly captures Johnson’s rich internal life, as well as the labors of her sister Aline, who has dedicated thousands of hours to making her sister’s life as structured and normal as possible. He looks optimistically at the role that Johnson’s condition could continue to play in helping scientists “understand more fully how the brain works” and thus “contribute in at least a small way to helping people with memory loss.”

But there’s also something metaphysical about Lemonick’s writing; the narrative brims with the sense that neuroscience alone cannot explain what it means to be human. It may not be the most popular sentiment in our data-driven society, but it’s a central motif in the author’s story — and, more importantly, Johnson’s. “Memories can be so vivid,” Lemonick writes, “that the neuroscientific explanation for what they actually are — merely a discharge of energy, the synchronous firing of brain cells in patterns laid down minutes or hours or decades in the past — threatens to trivialize their power as we experience them, to downplay the essential role they play in our lives.”