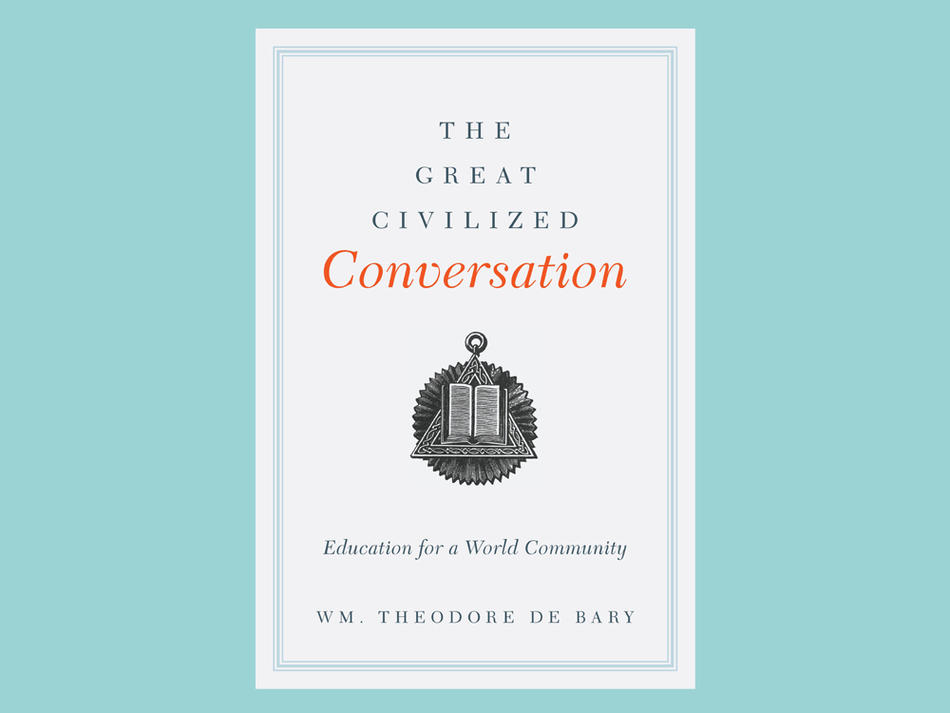 Your new collection of essays covers Asian classics as well as your broader views on teaching the humanities, which you’ve been doing at Columbia since 1948. The great conversation of the title usually refers to works of literature commenting on the works of previous generations, but it has a broader meaning for you.

My exposure to the term came in my humanities courses at Columbia College, especially with Mark Van Doren and John Erskine. It became increasingly significant to me as I realized that conversation was a key for the Confucians, my main area of study. The title of the work that is attributed to Confucius, Lunyu, was translated by Jesuit missionaries in China as Analects. That name stuck, but the literal meaning is “collected sayings” or “collected conversations.”

The conversation also suggests different cultures talking to one another through their works. Were you aiming for that cultural triangulation from the beginning?

I arrived at it pretty early, because I could see that in Japan, what I was learning about had been formed in some way by Confucianism and Buddhism. Japanese literate culture from the beginning was strongly influenced by China. It was enabled by their encounter with literate Chinese. They had an earlier, primitive culture, but it was oral and inarticulate for the purpose of civil discourse.

Your interest in Asian culture dates back to your arrival at Columbia.

It began with my first class as a freshman in 1937, Contemporary Civilization, which was taught by Harry Carman, who later became dean. He told us that we would be learning only about Western civilization, and he challenged us to start thinking about Asia, as well. Right away I was stimulated to do that, and I took Chinese as a sophomore.

Paul Robeson ’23LAW was in that Chinese class. You had been involved in leftist politics in high school. Were you in awe of Robeson’s presence?

No, by that time I wasn’t so awed. I had begun to be disabused of my radical ideas, and was especially suspicious of the Communist Party, which the socialists had worked with earlier, especially during the Spanish Civil War. Already we were beginning to learn something about how difficult it was to cooperate with the Communists without their subverting or dominating the process.

You understood that then, before the 1939 Molotov–Ribbentrop Pact?

I sensed that before Robeson himself did. He was still very much enchanted by Mao. I had been, earlier, but I was becoming disenchanted by Mao’s Stalinist leanings.

In your book, the core program of study you endorse begins with the “sympathetic and critical” repossession of a given society’s cultural traditions and then moves on to other major cultures: drawing on what is different, but also what we have in common.

We associate you with defining and defending Columbia’s Core Curriculum, and of course with bringing Asian studies into the Core. Reading this book, I began to think of the Core as something three-dimensional, like the core of the earth — the center that holds.

A lot of people don’t realize that. It has everything to do with centrality. If you stop to think about the name for China, Zhonghua, it is usually translated as “middle kingdom.” That is somewhat misleading. It was in the middle, but the main idea is “central”: the central kingdom everybody looks to for civilization, and for the core of civilization. That is a key to the whole thing.

You know, “general education” was then the going term, not “Core.” When I chaired the committee that reviewed the program at Columbia in 1987–88, one of the first things we discussed was the inappropriateness of “general education.” Because generality could lead anywhere. And did.

That’s what happened at Harvard because generality could mean anything. It became a kind of distribution requirement with no core.

Do you ever feel unsure of where you belong between East and West?

No, I’m an American. While I felt that it was essential for me to try to understand other cultures and civilizations, no other civilization could have the same meaning for me as my being an American and a Columbian.

Top Stories
Book Review: Horse
Can the World’s Religions Help Save Us from Ecological Peril?
What Declassified Government Documents Reveal About America’s Dark Secrets
The Pacifist's Guide to Satanism
Learning to Live with the Voices in Your Head
All categories >
Read more from Michael B. Shavelson