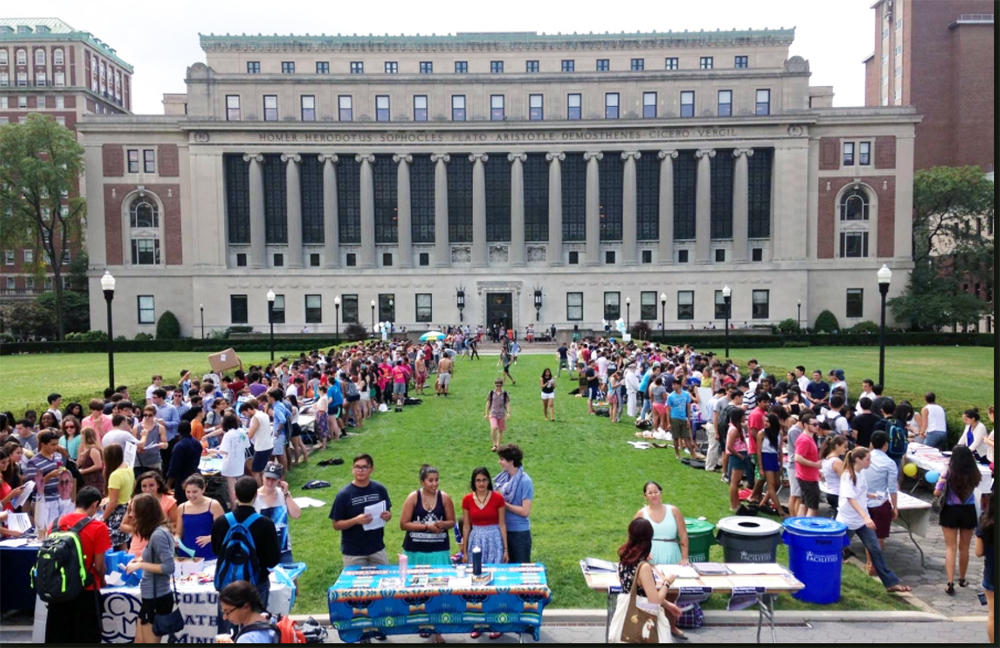 Swathed in streaming plumage and wearing papier-mâché masks as if fresh from a Chinatown street festival, a couple of members of Columbia University Lion Dance bobbed and weaved to an insistent drum on College Walk. On South Lawn, a young woman from Whitewater Kayaking perched precariously atop a table, scrunched in her craft, paddle at the ready.

Over at the Art Collective, the display swarmed with multicolored Post-its on which passing students had doodled. Nearby, two sparkly stalwarts of CU Bellydance — one dressed in red, one in green — went through their jingly gyrations.

“There’s a neuroscience society?” said a nearby student, as he admired a model of a human brain.

On a sunny day at the start of the school year, the activities fair was going strong. At this annual recruiting drive, many of the University’s five-hundred-plus undergraduate extracurricular clubs do their best to attract new blood, mainly that of eager first-years.

A generation or so ago, all the commotion could be crowded into a couple of wings of the now-vanished Ferris Booth Hall. But the burgeoning diversity, as well as the sheer size, of the student body has made the activities fair into something considerably more colorful and sprawling. This year, more than three hundred clubs participated. Such time-honored outlets as the Varsity Show, WKCR, and the CU Marching Band were joined by newer entries like the Columbia Vegan Society and Camp Kesem, for children of parents who have cancer.

By way of inducement, many tables came laden with Tootsie Pops, doughnuts, candy bars, and chocolate-chip cookies. There were handouts galore: flyers, cards, papers, and pamphlets. Literature from the Residence Hall Leadership Organization pledged to offer “the unique opportunity to lead where you live — polish your leadership skills, advocate for fellow residents, and plan impactful programs to build a stronger community.” The Atheist and Agnostic Students Society declared, “We were bummed that there was no group representing nonreligious students. With forty religious groups dominating discussions of faith on campus, we truly felt rear-ended.”

The day was also a time to fine-tune principles and build on lessons learned. The Jester crew stressed that their august humor magazine would be less smutty and more like the New Yorker. AllSex, a sexuality discussion group formerly known as FemSex, explained its name change as an effort to signal more inclusiveness. And the Black Students’ Organization was hoping to capitalize on the national mood around racial injustice. “Black Lives Matter has galvanized and mainstreamed the movement,” said president Damon Hart.

Meanwhile, the Columbia University College Republicans — who distributed Frisbees along with copies of the US Constitution — were declining to endorse a presidential candidate in the coming election. “I’m a little nervous,” said club president Annie Ninivaggi, “but I think it will be an exciting year to grow the club.” An hour and a half into the festivities, about thirty potential initiates had signed up.

Long before the four-hour event had wound down, engineering student Yifan Zhao was clutching a fistful of flyers from Women in Computer Science, Columbia University Bhangra (Punjabi dance), the Columbian yearbook, and Let’s Get Ready, which recruits students to help low-income kids with test prep. “I heard there was a coding club,” Zhao said. “I’m trying to find it.” Almost immediately, she turned around to see two students wearing blue T-shirts adorned with strange white symbols and a third hoisting a sign asking, WANT TO LEARN HOW TO CODE?

The scientist was awarded the $250,000 prize for her achievements as the founder of the Agricultural Model Intercomparison and Improvement Project