Noteworthy releases from alumni and faculty 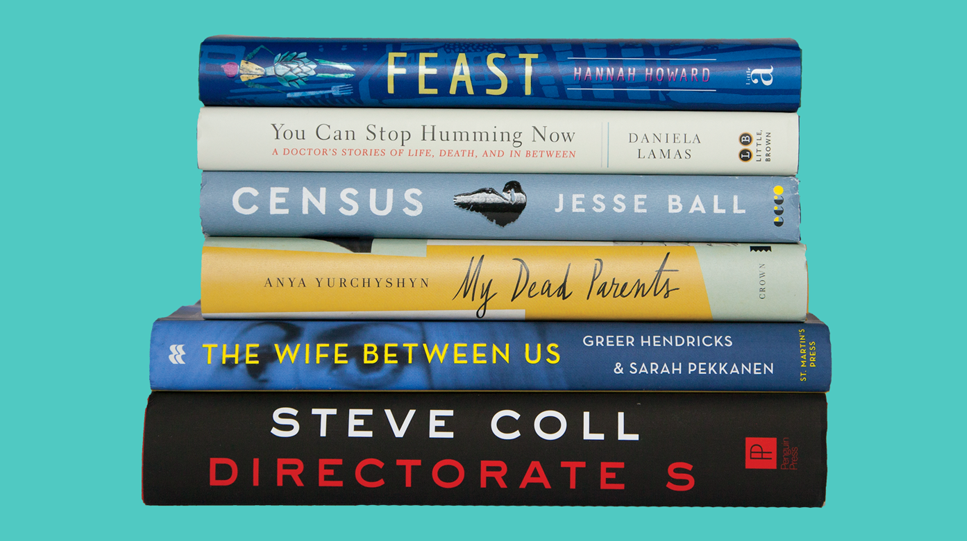 The Wife Between Us
by Greer Hendricks ’94JRN and Sarah Pekkanen

Don’t expect another thriller about a jealous ex-wife. As the jacket copy warns, it’s best to assume nothing. Hendricks and Pekkanen first met a decade ago, when Hendricks became Pekkanen’s editor at Simon & Schuster. Their first novel as a writing team is a wickedly clever mind-bender, in the tradition of Gone Girl and The Girl on the Train.

Howard is a food writer, a recipe developer, and also a recovering anorexic. In her memoir, she writes about being driven by two competing urges: her insatiable appetite and her desperate desire to stay thin. Howard’s account of her time at Columbia, when she was simultaneously in the thrall of her illness and working as a hostess at some of New York’s most high-profile restaurants, is particularly moving.

Columbia Journalism School dean Steve Coll won a Pulitzer Prize for his last book, Ghost Wars, which chronicled US involvement in Afghanistan from the Soviet invasion through September 11, 2001. Here, he picks up the narrative, writing about our efforts to fight al-Qaeda and the Taliban and capture Osama bin Laden. A feat of both investigative reporting and storytelling, Coll’s book is vitally important to understanding America’s place in the world in the early twenty-first century.

Ball’s eighth novel is also his most personal. Inspired by his brother Abram, who had Down syndrome, Census is the story of a father and his disabled son traveling across the country for the father’s job as a census taker. Like Cormac McCarthy’s The Road, the novel takes place in a futuristic dystopia and is imbued with a dark surrealism. But the focal point is clearly the very relatable love between father and son.

When Anya Yurchyshyn was sixteen, her father was killed in a mysterious car accident in his native Ukraine. Sixteen years after that, her mother also died, of complications from alcoholism. Yurchyshyn wasn’t close with her parents — her father was abusive and her mother enabled him — but after they died, she found an illuminating stash of their old letters and photographs. In her memoir, Yurchyshyn traces her parents’ lives, trying to understand them better — especially the circumstances surrounding her father’s sudden death.

You Can Stop Humming Now
by Daniela Lamas ’08PS

As a critical-care doctor, Lamas treats people at their sickest. While many medical narratives focus on the ways that technology can save lives, Lamas is concerned with what happens to those patients afterward. With a journalistic flair (Lamas was a reporter before going to medical school), she writes about a salesman who found a kidney donor on social media, an elderly man whose heart was replaced by a battery-operated pump, and other remarkable examples of modern medicine at work.

These series from alumni are worth watching and rewatching