A Woman's Quest for the World's Most Amazing Birds, by Olivia Gentile '03JRN (Bloomsbury). 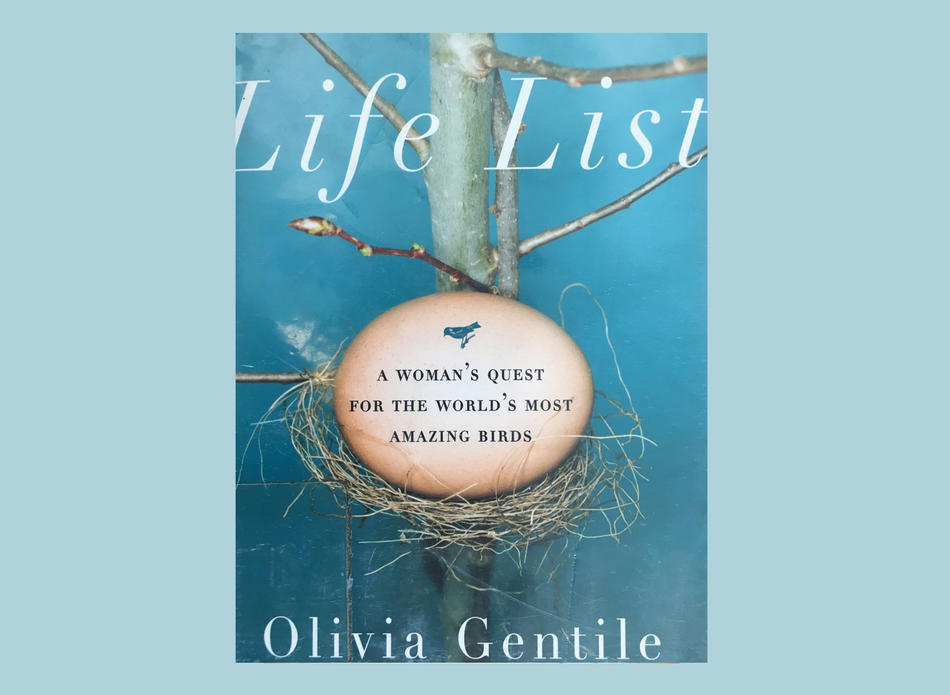 Phoebe Snetsinger’s parents didn’t name her after the phoebe, an insect-eating bird of the Americas. But had they been looking for a fitting bird name, they were alphabetically close: she was far more akin to the phoenix.

Which, as it turned out, was one of the few birds that Phoebe never saw.

The whole business started innocently enough. On a spring day in 1965, Phoebe, then a vaguely dissatisfied 34-year-old housewife and mother of four, was standing in a neighbor’s yard in Webster Groves, a suburb of St. Louis. The neighbor, who, like Phoebe, was what is now called a “stay-at-home mom,” handed her a pair of binoculars and pointed to a branch of an oak tree. What Phoebe saw — and felt — amounted to a rapture: “a black-and-white bird, no bigger than a child’s hand, with a yellow head, shiny black eyes, and a throat the color of a ripe mango.”

It was a Blackburnian Warbler, and, as the neighbor told Phoebe, it had flown north from South America to breed.

With this miraculous little moment, author Olivia Gentile ’03JRN sets Life List, the story of the world’s most prolific birder, on its remarkable flight.

Birding, with its leisurely sounding evocations of lawn chairs and field glasses, is the term given to what is in fact a far more rigorous pursuit. As Gentile vividly reports, serious birders, to say nothing of fanatical ones, take exceptional risks in order to spot and identify the more recondite members of the world’s nearly 10,000 species. These adventurers travel to remote jungles, inaccessible mountains, and the forests of unstable nations, where they might encounter violent weather, exotic illnesses, perilous altitudes, armed guerrillas, kidnappers, and even deadly birds, like the six-foot-tall Southern Cassowary, “known to kill people with a swift, eviscerating kick to the stomach.” And if they are lucky enough to glimpse a Crested Eagle, or the “improbable looking” Helmet Vanga of Madagascar (“a small black body, cat-like yellow eyes, and a giant, downwardly curved, electric-blue bill”), they will add the bird to what’s called a “life list,” a record of the birds one sees anywhere in the world, over a lifetime.

This list is the birder’s version of the gunfighter’s holster: each name is a notch by which one’s triumphs are tallied. The birding purist must be able to identify her quarry’s markings (as opposed to merely discerning its calls, an alternate criterion whose growing acceptance in birding circles offended Phoebe) in order to enter it, in good faith, into her catalog. For Phoebe, the moment of visual conquest produced a rush of ecstasy unlike anything in her experience.

That Phoebe had, by the end of her strange life, compiled more names on her list than anyone in history — approximately 8400, or a staggering 85 percent of the world’s birds — would be an enormous feat under the best of circumstances. (It also would have made her one of the most euphoric people on earth.) But, as Gentile tells us in clean, direct, unsentimental prose, Phoebe’s accomplishments were forged against tremendous adversity — and came at a heavy cost.

Not a financial cost: Phoebe had no trouble funding her next bird tour to Peru or Mongolia or Kenya or Australia. Her father, Leo Burnett, had started an advertising agency in Depression-era Chicago that later produced such hits as the Maytag Repairman and the Pillsbury Doughboy. From Leo, Phoebe inherited not just brains and ambition (she was high school valedictorian and an A student at Swarthmore) but the means to cross the globe dozens of times over. (In addition, Phoebe’s husband, Dave, made a good living at Purina as a researcher for, of all things, poultry feed.) In that regard, Phoebe’s achievements might be said to lie at the intersection of wealth and eccentric passion. But Phoebe, a habitual note taker and indexer, was also expanding science: her fieldwork has, among other things, led to the reclassification of several subspecies into distinct species. In any case, money could have taken her only so far — once she arrived at her wild, forbidding destinations, her body and mind had to do the rest. Good health was imperative.

It was also in short supply. In 1981, with her life list under 2000, Phoebe discovered a lump in her right armpit. She was diagnosed with terminal melanoma, and given, at most, a year to live. Shattered, Phoebe sought consolation in the thing that made her feel most alive, and with her family’s blessing, she decided to see as many birds as she could in the time she had left. Life List revisits those far-flung trips and the amazing birds they yielded, providing us, through Phoebe’s eyes, a vision of an auspicious moment in history, when travel and access permit the explorer to see much of what remains of the planet’s dwindling avian populations. One can still see the Madagascar Bee-eater, the Emerald Cuckoo, and Temminck’s Tragopan (“a pheasant with a blue head, an orange throat, and a blood-red body that is sprinkled with white dots that look like pearls,” Gentile writes), even as habitat loss and pollution lower the window ever more.

Using Phoebe’s letters, field notes, her memoir (published posthumously in 2003 by the American Birding Association), and her writings in a Webster Groves nature newsletter, as well as extensive interviews with the Snetsinger family and Phoebe’s birding associates, Gentile has constructed a gripping biography colored with dashes of travelogue, social history (the rise of Audubon societies, the disaffection of college-educated women in the 1950s and ’60s), and field guide (the lovely illustrations are by Rebecca Layton ’93BC). Life List is also a painful portrait of an uncommunicative marriage, and a provocative tale of obsession. Not least, it’s a story of survival in the face of that 1981 death sentence. As Phoebe writes in her memoir: “Somehow I developed a feeling of virtual invincibility once I was on the plane and heading toward new places and birds; I was leaving the threat behind.” So she did, for 18 more years.

Gentile is a sharp and selfless narrator, giving generous rein to Phoebe’s own stark, intelligent voice, which is quoted throughout the book. The result is a satisfying interplay that owes something to Mr. and Mrs. Zagat. Here’s Phoebe in the Ivory Coast in 1999, just months before her death, observing rockfowls:

Phoebe set up her folding stool and, for a half-hour, gazed ecstatically. She noted their “bare golden” faces, their “heavy black” bills, and the “silky lemon-yellow wash” across their otherwise white chests. “Exquisite, stationary or leisurely hopping studies,” she wrote. “Totally amazing experience.”

It’s a graceful duet that allows both Phoebe and her biographer to fan their writerly feathers. (Gentile knows exactly when to step aside, and when to take the lead.) The book is less assured when it seeks to analyze Phoebe’s behavior, particularly her stoical reaction to a horrific assault suffered during a trip to New Guinea. Even as Phoebe becomes increasingly irritable with tour guides and more competitive in her listing, and misses both her mother’s funeral and her daughter’s wedding in favor of yet another bird tour, one senses that she exists outside the conventions of psychology. But that is no criticism of Gentile, for whom the task of capturing so darting and inspired a mind is as tricky as Phoebe’s own pursuit, at the time of her death in Madagascar, of Appert’s Greenbul, “a little peach-and-green bird,” Gentile writes, “that had been found and named only about thirty years earlier.” Phoebe never saw that bird, but Gentile allows us to see Phoebe, more closely than nature would seem to permit.

To her further credit, Gentile neither judges nor protects her subject. At the end of an exhausting and often repetitive whirlwind of globe-trotting marked by elation and tragedy, Phoebe is left standing in the mind’s eye, in floppy hat and binoculars, squinting up at a tree — a devotee who accepted the setbacks and hardships as a fair price for her happiness.

“I don’t go out of my way to court danger,” she wrote, “but on the other hand, if you’re looking for safety and security, there really isn’t any — anywhere.”