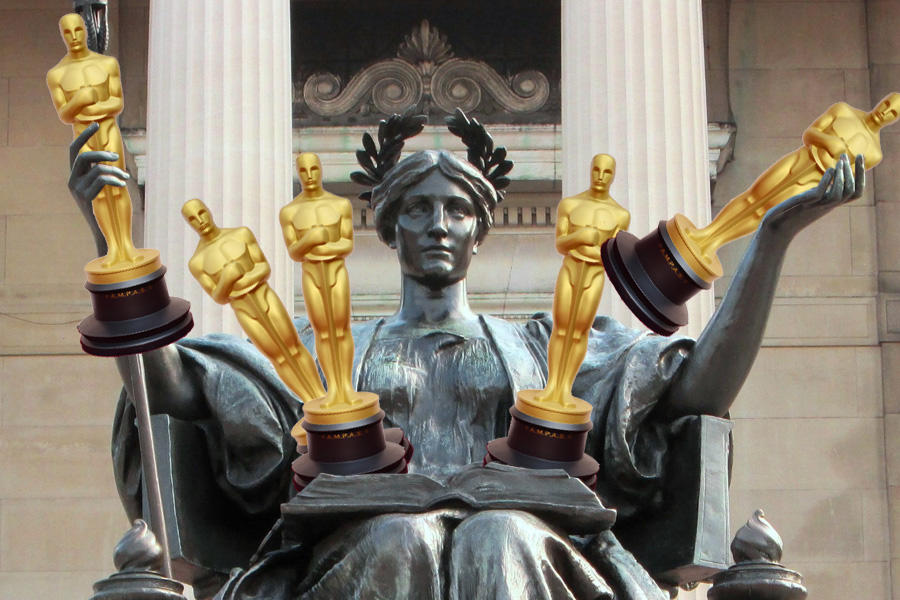 From the Golden Age to Green Book, Columbia directors and screenwriters have been sweeping up statuettes for decades. Here are some of their notable Academy Award–winning movies that you can add to your streaming queue.

Directed and cowritten by Peter Farrelly ’86SOA, this dramedy was inspired by the true story of African-American concert pianist Don Shirley; his white chauffeur, Frank Vallelonga; and their turbulent road trip through the Jim Crow–era South.

This family-friendly reboot of a Hans Christian Andersen fairy tale kicked off a massively profitable franchise. It also made screenwriter and codirector Jennifer Lee ’05SOA, today the chief creative officer of Walt Disney Animation Studios, the first woman to direct a movie earning more than $1 billion in box-office revenue.

Kathryn Bigelow ’79SOA took home the highly coveted best-director Oscar for her film about an Iraq War bomb-disposal team. A decade later, she is still the only woman to have won this award.

This historical drama written by Bill Condon ’76CC looks at the last days of James Whale, an openly gay English filmmaker who directed 1930s horror classics including Frankenstein and The Invisible Man.

Adam Davidson ’91SOA was an MFA student at Columbia’s School of the Arts when he made this twelve-minute black-and-white film set in the cafeteria at Grand Central Terminal. The short went on to win both an Oscar and the Short Film Palme d’Or at the 1990 Cannes Film Festival.

Based on the 1979 play by Peter Shaffer, this epic period drama from Czech filmmaker Miloš Forman ’15HON, the former chair of the Columbia School of the Arts film program, explores the intersections of art, genius, and immortality through the stories of rival classical composers Wolfgang Amadeus Mozart and Antonio Salieri.

Steve Tesich ’67GSAS, a Serbian-American writer who earned a master’s degree in Russian literature at Columbia, penned the Oscar-winning screenplay for this coming-of-age comedy about four recent high-school graduates who take up bicycle racing.

Based on the iconoclastic 1962 novel by Beat writer Ken Kesey, this first Oscar-winning film from Miloš Forman ’15HON, which starred Jack Nicholson as a rebellious patient in an oppressive mental institution, swept each of the “big five” awards at the 1976 Oscars.

Billy Wilder’s stark portrayal of workplace affairs and toxic office culture, cowritten by I. A. L. Diamond ’41CC, was shocking to some viewers in 1960, but the sleek dark comedy holds up extraordinarily well in a post–Mad Men #MeToo era. (Diamond, a frequent collaborator of Wilder’s, also cowrote the 1959 classic Some Like It Hot.)

Cowritten by William Ludwig ’32CC, ’34LAW, this Technicolor musical tells the real-life story of Marjorie Lawrence, a Wagnerian opera star from Australia who was tragically struck with polio while touring in Latin America in 1941.

This lauded classic from Joseph L. Mankiewicz ’28CC about the competitive and backstabbing side of show business swept up fourteen Oscar nominations and six wins, while pushing forty-two-year-old Bette Davis — at the time a Hollywood has-been — back into the limelight.

By the time he made All About Eve, Joseph L. Mankiewicz ’28CC was already an Oscar winner. His 1949 romantic melodrama, which features a young Kirk Douglas, may be largely forgotten today, but it won the prolific filmmaker his first Academy Awards for directing and screenwriting.

From “Here’s looking at you, kid” to “We’ll always have Paris,” this World War II romance starring Humphrey Bogart and Ingrid Bergman contains some of the most famous film lines ever uttered. Some credit is due to cowriter Howard Koch ’25LAW, a Columbia Law School graduate who authored several Hollywood screenplays before he was blacklisted in 1951 by the House Un-American Activities Committee.

Herman J. Mankiewicz 1917CC, older brother of Joseph, cowrote this Orson Welles classic about the rise and fall of a William Randolph Hearst–like media mogul. The film, which was plagued by controversy and poor box-office receipts at the time of its release, is now ranked the greatest American movie of all time by the American Film Institute.