These series — all from alumni showrunners, producers, directors, or screenwriters — are worth watching and rewatching. 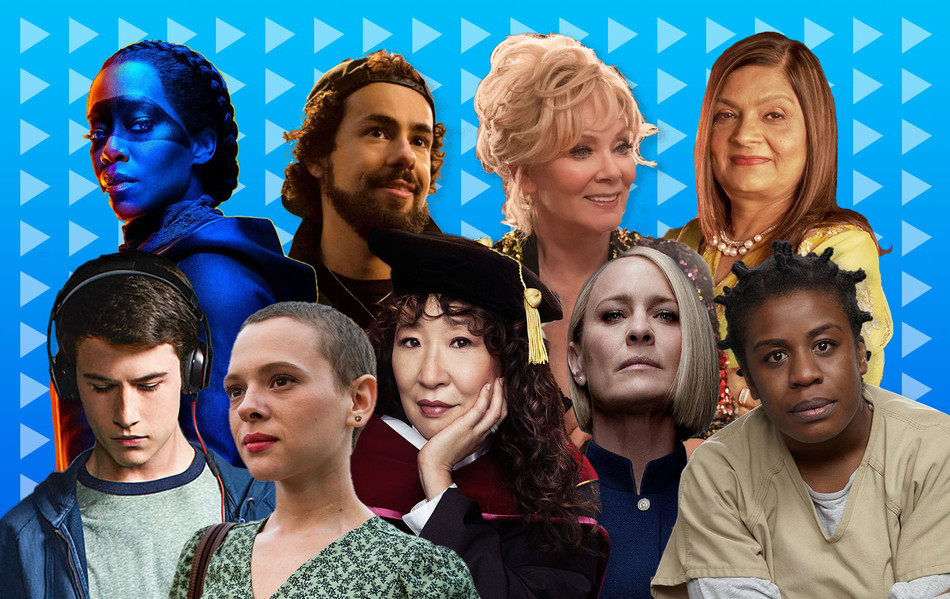 Developed and executive-produced by Brian Yorkey ’93CC, this drama looks at the causes and effects of a high-school suicide and takes a deep, dark dive into the issues of depression and bullying among twenty-first-century teens. Yorkey, a Broadway playwright and lyricist, also tackled mental-health themes in Next to Normal, the 2008 Pulitzer- and Tony-winning musical that he wrote with composer Tom Kitt ’96CC. Stream on Netflix.

This adaptation of Tony Kushner’s 1991–92 play about homosexuality, AIDS, and the Reagan era earned enormous praise at the time of its 2003 release. Kushner ’78CC, ’10HON, already a Pulitzer and Tony winner, received an Emmy for his screenplay. With stunning performances by an ensemble cast that included Al Pacino as the notorious attorney and political fixer Roy Cohn ’46CC, ’47LAW, the six-part show remains one of HBO’s greatest limited series. Stream on Amazon Prime Video or HBO Max.

Sandra Oh stars as the newly appointed chair of a university English department in The Chair, a satire of academia and its culture wars. Actress Amanda Peet ’94CC co-created, executive produced, and co-wrote the dramedy in her first turn as a showrunner. Stream on Netflix.

Gina Fattore ’90CC developed, executive produced, and co-wrote this USA Network crime drama about a cutthroat high-school cheerleading squad. Based on the 2012 novel by Megan Abbott, who co-created the series with Fattore, Dare Me offers a fresh, arty take on the teen genre. Stream on Netflix.

Released in three parts — Deutschland 83, 86, and 89 — this German thriller series from showrunner and writer Anna Winger ’93CC tells the story of an East German spy in the years surrounding the fall of the Berlin Wall. Stream on Hulu.

Writer Daria Polatin ’07SOA adapted her 2017 book of the same name into this suspense series about a Satan-worshipping cult in Ohio. Stream on Netflix.

An American flight attendant wakes up next to a dead body in a Bangkok hotel at the start of this thriller and dark comedy, which stars Kaley Cuoco in the title role. Susanna Fogel ’02CC served as an executive producer and director for the first season. Stream on HBO Max.

Lisa Cholodenko ’97SOA executed produced and directed two episodes of The Girl from Plainville, a limited series based on the true story of the manslaughter case against Michelle Carter, a teenager who encouraged her boyfriend to commit suicide. Stream on Hulu.

TV industry veteran Lawrence Trilling ’88CC was an executive producer and director for Goliath, a legal drama starring Billy Bob Thornton as an alcoholic lawyer with a complicated past. Stream on Amazon Prime Video.

James McBride ’80JRN served as an executive producer on The Good Lord Bird, a limited series adapted from his 2013 historical novel of the same name. Ethan Hawke stars as John Brown, the abolitionist who led a violent crusade against slavery in the 1850s. Stream on Showtime.

From showrunner Lucia Aniello ’04CC, Hacks stars Jean Smart as a has-been Las Vegas comedian who pairs up with a “cancelled” young comedy writer as they attempt to revive their careers. Aniello won two 2021 Emmy awards for directing and writing the series. Stream on HBO Max.

Created by playwright and screenwriter Beau Willimon ’99CC, ’03SOA, House of Cards is the show that put Netflix on the map as a producer of high-quality original content — in 2013, the political thriller became the first Web-only series to receive major nominations at the Emmys and the Golden Globes. It also helped kick off the binge-watching era by releasing all the episodes of a season at one time instead of weekly. Stream on Netflix.

Smriti Mundhra ’09SOA created and executive-produced this docuseries, which follows a professional matchmaker as she attempts to pair up Indian singles. The series, which takes place in both India and the United States, explores the role of centuries-old customs in today’s world. Stream on Netflix.

Based on the hit 2017 novel by Celeste Ng, this limited series stars Reese Witherspoon and Kerry Washington as suburban mothers from very different backgrounds who become intertwined in a fiery drama. Amy Talkington ’93BC, ’99SOA and Raamla Mohamed ’03CC served as writers and co-executive producers. Stream on Hulu.

Actor and screenwriter Dan Futterman ’89CC co-created this dramatic adaptation of Lawrence Wright’s 2006 Pulitzer-winning book about the origins of the 9/11 attacks. Starring Jeff Daniels as FBI counterterrorism expert John O’Neill, the ten-part series looks closely at the impending threat of Osama bin Laden and al-Qaeda in the 1990s, as well as the US government’s failure to anticipate the terrorists’ cataclysmic plot. Scott Ferguson ’90SOA co-executive-produced the series. Stream on Hulu.

This investigative docuseries is a staple of the true-crime renaissance that emerged in the mid-2010s. Written, directed, and produced by Laura Ricciardi ’07SOA and Moira Demos ’96CC, ’08SOA, the show recounts the true story of Steven Avery, a Wisconsin man who spent eighteen years in prison after he was wrongfully accused of sexual assault and attempted murder, only to find himself back in jail for another murder in 2007. The first season became a cultural phenomenon for its exploration of the flaws in the criminal-justice system and of the complex process of convicting a killer. Stream on Netflix.

Jeff Rake ’90CC created, executive produced, and co-wrote Manifest, a supernatural series about the passengers of a lost airplane who mysteriously return after a five-year disappearance. Stream on Netflix.

This coming-of-age dramady about an Indian-American high-school student is inspired by the experiences of Mindy Kaling, who co-created the series with Lang Fisher ’02CC. In addition to executive producing the show, Lang has written and directed several episodes. Stream on Netflix.

In this lyrical and informative eight-part PBS series, documentarian Ric Burns ’78CC, ’83GSAS chronicles the history of New York City in all its grit and glory. With commentary from Columbia professors including Kenneth T. Jackson and Margo Jefferson ’71JRN, the series is a moving exploration of the innovation, multiculturalism, and resilience that make New York New York. Stream on Amazon Prime Video.

Frances McDormand plays antihero Olive Kitteridge, a prickly retired teacher in a Maine seaside town, in this four-part miniseries based on the 2008 Pulitzer-winning book by Elizabeth Strout. A favorite at the 2015 Emmys, the series landed director Lisa Cholodenko ’97SOA, a filmmaker best known for her 2010 film The Kids Are All Right, an award for outstanding directing. Stream on HBO Max.

Cherien Dabis ’04SOA directed four episodes of this comedy about three neighbors who start a true-crime podcast while trying to solve a murder mystery in their New York City apartment building. Stream on Hulu.

This massively popular dramedy from creator Jenji Kohan ’91CC, inspired by the 2010 memoir by Piper Kerman, takes a humanizing and multilayered look at life in a minimum-security federal prison for women. Known for its diverse and richly developed cast of characters, the show never shies away from weighty topics such as race, criminal justice, sexuality, addiction, abortion, domestic violence, and prisoners’ rights. Stream on Netflix.

In cringey comedy Pen15, actress-comedians Maya Erskine and Anna Konkle play middle-school versions of themselves. Gabe Liedman ’04CC was a member of the executive producing team for the show’s first season and has written two episodes. Stream on Hulu.

Pulitzer Prize-winning playwright Katori Hall ’03CC recently proved her talents behind the screen with P-Valley, a drama she created, executive produced, and co-wrote about the lives of African-American strippers in the Mississippi Delta. Stream on Starz.

Gabe Liedman ’04CC created and served as the showrunner of Q-Force, an adult animated comedy about a team of queer superhero spies. Stream on Netflix.

Ramy, a comedy inspired by creator and star Ramy Youssef’s own life, explores the experience of being Muslim in present-day America. Columbia film alumna Cherien Dabis ’04SOA served as a co-executive producer and directed six episodes. Stream on Hulu.

Raamla Mohamed ’03CC helped keep viewers on the edges of their seats as a writer and executive story editor on Scandal, the Shonda Rhimes thriller about a political crisis manager. Stream on Hulu.

Scott Ferguson ’90SOA has produced numerous films and television series throughout his decades-long career. Since 2019 he has served as an executive producer on Succession, the Emmy-winning drama about an aging media mogul and his power-hungry entourage of family members and subordinates. Stream on HBO Max.

Lauded by everyone from professional critics to Barack Obama ’83CC, this limited series is based on the disturbing true story of a series of rapes that took place in Washington and Colorado between 2008 and 2011. Executive producer Lisa Cholodenko ’97SOA directed the first three episodes, which begin the show’s central narrative about an eighteen-year-old victim who was falsely accused of — and criminally charged for — lying to police about her attack. Stream on Netflix.

Dede Gardner ’90CC, the president of Plan B Entertainment, has produced numerous acclaimed films, including Oscar best-picture winners 12 Years a Slave and Moonlight. She recently executive produced The Underground Railroad, a historical fantasy series created by Barry Jenkins and based on the novel by Colson Whitehead. Stream on Amazon Prime Video.

This limited series, which was created and written by Anna Winger ’93CC, tells the story of a young woman who leaves the ultra-orthodox Satmar Hasidic Jewish community in Williamsburg, Brooklyn and finds her way in Berlin. Loosely based on Deborah Feldman’s memoir Unorthodox: The Scandalous Rejection of My Hasidic Roots, the series won a 2020 Emmy for Outstanding Directing. Stream on Netflix.

Nicole Kassell ’94CC served as an executive producer on Watchmen, a show inspired by the 1983 DC Comics superhero series of the same name. The adaptation, which is set in a fantasy version of Tulsa, Oklahoma in 2019, follows a group of detectives and police officers as they investigate the crimes of a white-supremacist group. Kassell directed three episodes. Stream on HBO Max.

Before she made Orange Is the New Black, Jenji Kohan ’91CC, who had worked for years as a producer and screenwriter on shows like Mad About You and Gilmore Girls, got her big break as the creator and showrunner of Weeds. The dark comedy, which stars Mary-Louise Parker as a widowed suburban mom who embarks on a lucrative career in the illegal marijuana trade, was once the highest-rated program on Showtime. Stream on Hulu or Roku.

Ashley Lyle ’02CC, ’07SOA is the co-creator of Yellowjackets, a genre-bending horror drama about the members of a women’s high-school soccer team who survive a plane crash and spend nineteen months in the wilderness. Lyle, who served as a writer on The Originals, Narcos, and Dispatches from Elsewhere before creating her own show, co-wrote several episodes of Yellowjackets' first season. Stream on Showtime.

This article was originally published in June 2020. It was last updated in September 2022.

How the Mankiewicz Family Got Their Hollywood Ending