The Origins of the Arab-Israeli Conflict, by Jonathan Schneer '78GSAS (Random House). 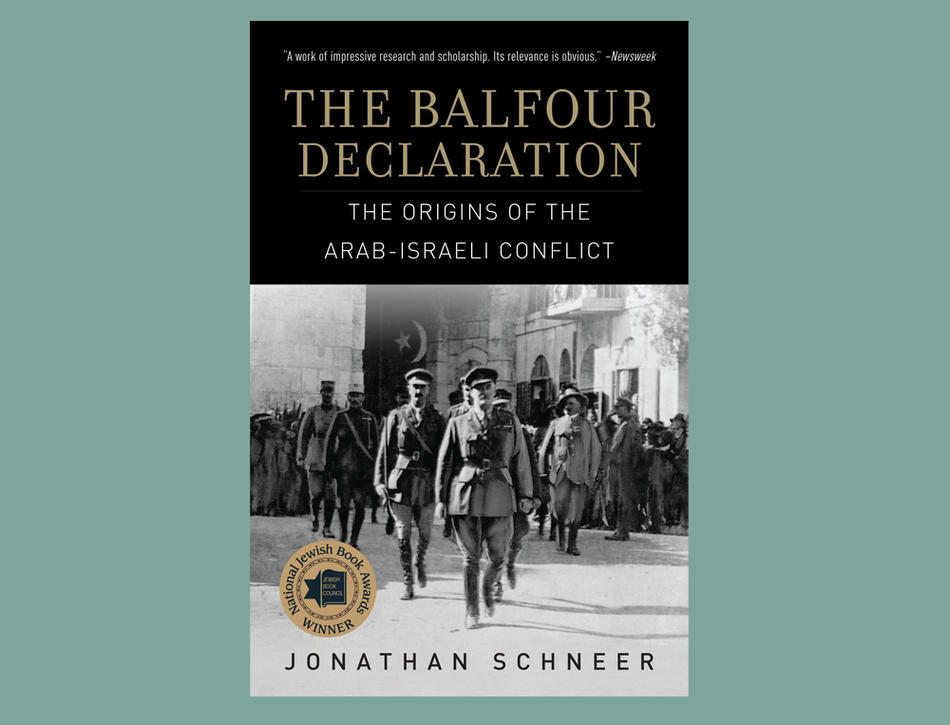 Early in November 1917, Arthur Balfour, the British foreign secretary, handed an extraordinary letter to Lord Rothschild, head of that famously successful Jewish family and unofficial representative of British Jewry. Balfour had chosen this rather personal means of communicating that the members of the British government “view with favour the establishment in Palestine of a national home for the Jewish people.” An important qualification added that nothing was to be done to prejudice the rights of the Arabs.

How this, the Balfour Declaration, came about has always been a mystery. A home in Palestine for the Jews could not be considered a British national interest. Nor did the issue of a national home attract more than a small and unrepresentative minority of Jews. Zionism, or Jewish nationalism, was then a relatively new movement. Its leader, Chaim Weizmann, had presence and intelligence, but he was a social outsider, an immigrant speaking with a Russian accent. David Lloyd George, a prime minister of extreme moral agility, was prepared to ditch the Declaration up until the very last moment. Lord Curzon, former viceroy of India, and Edwin Montagu, a Jew, were the only cabinet colleagues with an informed interest in foreign policy, and both opposed the Declaration.

Arab nationalism was another relatively new movement, and its leaders at once objected to the idea of a national home in Palestine for anyone except themselves. The British seem to have set Arabs and Zionists against one another, with the immediate consequence of bringing trouble on themselves. As the Jewish national home shaped into the state of Israel over the next decades, many in the Arab and Muslim world came to believe that the Balfour Declaration marked a first step in an Anglo-Jewish imperialist policy of deliberately deceiving Arabs.

In The Balfour Declaration: The Origins of the Arab-Israeli Conflict, Jonathan Schneer ’78GSAS, a professor of history at Georgia Tech who specializes in modern Britain, has put together a mass of material to decipher how the British got themselves and many others into a long-drawn mess. He concludes that there was no Machiavellian conspiracy. On the contrary, he shows that the Declaration was formulated amid the urgent but conflicting pressures of a world war. Official and unofficial lobbyists, busybodies, and double-dealers were in their element. This is a story about the workings of politics and diplomacy, and its moral is that even at the highest levels of government, decision making is at the mercy of opportunism, sheer chance, and, above all, ignorance.

The November 1914 decision of the Young Turks in Constantinople to join Germany’s side in the First World War was the first miscalculation with unforeseen consequences, for it placed at risk the future of the entire Ottoman Empire. Had Turkey instead joined the Triple Entente — composed at the time of Great Britain, Russia, and France — or stayed neutral, there would have been no Balfour Declaration. The embryonic Arab and Jewish nationalist movements were already anticipating independence from Ottoman rule. On the grounds that my enemy’s enemy is my friend, both were quick to seek British sponsorship for their ends. The British, in need of allies in the all-out campaign against the Turks, responded positively. Suddenly the future of the Middle East was up for grabs.

Sharif Hussein bin Ali of Mecca was the only Arab in a position to act as nationalist champion of the Arab cause, and Schneer deals kindly with him, and at length. Head of the Hashemite family, with impeccable Islamic credentials, the sharif was a shrewd and ambitious ruler who had few resources except his wits. He could raise only a limited number of undisciplined Bedouin tribesmen to fight for him, and they tended to vanish in a crisis. Prudently, he kept lines open to both Germany and Britain until he was sure that the latter would win the war and he could pick up from them whatever spoils were available. Once the British began driving the Turks out of Mesopotamia and Palestine, and once they had paid and armed the sharif, he liked to visualize himself as emir or grand sharif over Arabs everywhere.

Sir Henry MacMahon, a colorless official whose career had been in India until he became British high commissioner in Egypt, had the thankless task of striking a deal with the sharif. Schneer joins the many historians who have picked over the ambiguities in their correspondence. MacMahon thought he had excluded territories — including Palestine — from the kingdom reserved for the sharif; the latter claimed that he had been promised all Arab territories. Each was undoubtedly trying to take advantage of the other, but their exchange of letters involved negotiation and could not carry the weight of binding legal documents.

In June 1916, Sharif Hussein at last leaned out of his palace window in Mecca to fire a shot that symbolized armed opposition to his Ottoman overlords: the Arab Revolt was under way. One of the British officers sent to lead the sharif’s Bedouin tribesmen was T. E. Lawrence, mythologized as Lawrence of Arabia. After the war, he popularized the notion that the British had broken a cast-iron agreement that the sharif was to become king of all the Arabs, and that this was a shameful betrayal.

Schneer is vague when it comes to allotting blame. But if so famous a man as Lawrence could come out accusing his superiors of treachery, who were Arabs to discredit him? As it was, Sharif Hussein had manipulated the British into helping him fight the Turks and obtain a kingdom in Arabia, going on to complain because it wasn’t larger. Present-day Arab insistence that ever since the First World War they have been victims of imperialist perfidy obscures the reality that the sharif had manipulated the British into arming and financing his campaign to take the place of the Turks in all their Arab provinces.

Enter Sir Mark Sykes, whom Schneer holds responsible for making the political process even more confused than it already was. Sykes was a baronet, a rich dilettante who had enjoyed traveling in the Middle East before becoming a Conservative member of Parliament, and then secretary to the war cabinet. In a secret 1916 treaty with François Georges-Picot, Sykes’s French opposite number, Sykes agreed to reserve Palestine for the French. British politicians and the military soon regretted this, and were delighted when wartime realpolitik made the treaty null and void. The changeable Sykes had seen nothing incompatible in backing British and French ambitions, Arab nationalism, and Zionism at the same time. He met Chaim Weizmann in January 1917 and their immediate friendship was, in Schneer’s phrase, a crucial connection. “Sykes clearly recognized in Weizmann the Zionist he had been seeking, while Weizmann immediately recognized in Sykes the highly placed government official with whom Zionists could most effectively work.” When the Balfour Declaration became public that autumn, Sykes boasted to Weizmann, “It’s a boy!”

In Schneer’s opinion, Sykes had such a singular gift for squaring circles that he might have been able to satisfy the rival claimants he’d encouraged. Unfortunately, he died in 1919, before the postwar settlement could be finalized, leaving posterity to deal with the mess.

Yet even beyond Sykes, his great ally, Weizmann, held an improbable ace in his hand. He was a Jew at a time when Jews were imagined to have the international power to influence the outcome of the war. Rumor had it, Schneer writes, that in the face of defeat, Germany was planning to attract Jews to its side with its own Zionist manifesto. France actually got in first, preemptively, with its June 1917 appeal for a Zionist home in Palestine under French administration. As Sykes warned the Foreign Office, “With ‘Great Jewry’ against us, there is no possible chance” of defeating Germany.

In grim reality, Jews in Central and Eastern Europe were prime victims of the war — poor and humble people powerless to save themselves from being massacred by the thousands as battles raged above their heads. But Sykes’s view, Schneer tells us, was apparently shared by the majority of the diplomatic establishment of the U.K. and France: “That Sykes might have gripped the wrong end of the stick altogether; that his notion of Jewish world power was outrageously, egregiously, mistaken; that it was based upon romance and myth and age-old prejudice, not upon fact; and that it was at heart profoundly irrational does not seem to have occurred to any of them.”

The inescapable conclusion of Schneer’s pioneering research across three continents is that Weizmann and the Zionists in London won out and got the Balfour Declaration because so many politicians were in the grip of anti-Semitic stereotypes. It is outrageously ironic that the age-old fantasy of Jews as the invisible string pullers of everything should underlie the foundational certificate of the state of Israel.