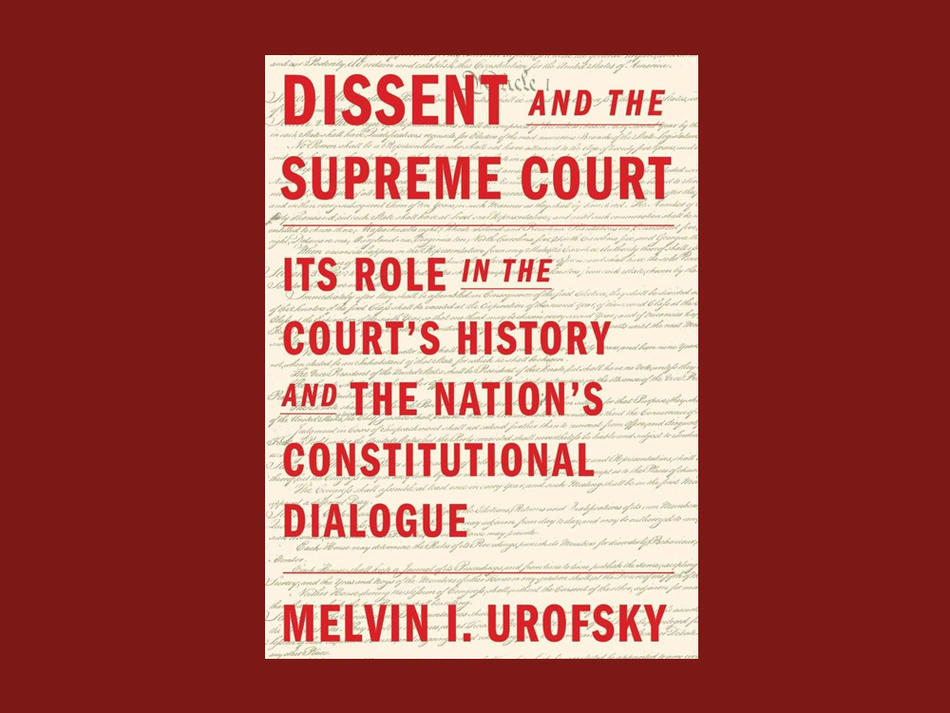 The general readership of US Supreme Court opinions is vanishingly small, but of the few comments that have recently seeped into the public consciousness, many, if not most, come from Justice Antonin Scalia’s deliciously savage dissents. In colorful language, he dispatches opposing arguments one after the next: “Legalistic argle-bargle!” “Interpretive jiggery-pokery!” “Pure applesauce!”

But dissents are more than witty retorts. The best ones are appeals “to the brooding spirit of the law, to the intelligence of a future day,” as Chief Justice Charles Evans Hughes 1884LAW memorably put it in 1928. When they are persuasive, they can eventually reshape the law, even if it takes decades.

Melvin I. Urofsky ’61CC, ’68GSAS, in his dense and incisive Dissent and the Supreme Court, traces the dissent’s noble history and shows how many of the most important protections of American society — free speech, racial equality, individual liberty — began their lives as dissents pushing back against a court that was not yet ready to hear them.

In the Supreme Court’s earliest days, there were no dissents because there were no majority opinions: the court followed the British practice of seriatim, in which each judge delivered his own opinion according to his own reasoning. The victor in a case could be deduced by counting heads, but the opinions gave an incoherent view of the law. In 1801, when President John Adams nominated his secretary of state, John Marshall, to serve as chief justice, a new era began. Marshall pushed the justices to arrive at a consensus opinion, which would be delivered by the chief. This shift toward unanimity, Urofsky argues, helped the court grow from the weakest branch of government to one coequal with Congress and the president.

But not everyone believed that such consensus was healthy for the country. Thomas Jefferson, a distant cousin of Marshall’s (and not a friendly one), denounced the new opinions as written “perhaps by a majority of one, delivered as if unanimous, and with the silent acquiescence of lazy or timid associates.” Occasionally, a justice would refuse to go along with the pack; in those cases, he would file an apologetic dissent. But as the country moved away from the moment of its founding, new, complex issues presented themselves — commerce cases, slavery cases — that led to divergence of opinion. Dissents became increasingly necessary to articulate differing views of the Constitution that might then compete for the public’s imagination.

As Urofsky tells the stories of the most influential dissents, what is most surprising is how differently the Constitution’s core guarantees were first understood. The right to free speech, for example, initially prevented only “prior restraint” — it did not stop the government from punishing the publisher of a leaflet opposing the draft, or another protesting American policy toward Russia. It took Justice Louis Brandeis’s minority opinion in Whitney v. California (1927) to articulate the philosophy of free speech as a civic virtue, and the cure for undesirable speech as “more speech.” Even that view took forty years for the court to fully embrace.

Urofsky never gives us a unified theory of why some dissents gain influence and others don’t, but it’s clear that some justices are more persuasive with their colleagues than others. This can be the result of quality of personality (Justice Felix Frankfurter is said to have driven his colleagues to dissent out of sheer frustration) or quality of reasoning. Brandeis’s famously effective dissents were crammed with historical background and social-science data — a model that Urofsky, an emeritus professor at Virginia Commonwealth University and the author of a much-praised Brandeis biography, admirably follows in his own writing. For example, law-school graduates will be familiar with Justice Oliver Wendell Holmes Jr.’s 1905 dissent that would eventually provide the basis for upholding US labor laws, but Urofsky fills in the lesser-known details of the story: the harrowing conditions of the Lower East Side tenement-cellar bakeries that the law at issue was trying to regulate.

Will today’s dissents, by Scalia and others, one day be embraced as prophetic? Only if they speak to the needs of the times — as Holmes’s defense of labor laws did in the Progressive Era and Brandeis’s defense of free speech did in the civil-rights era. If the right moment comes, Urofsky tells us, the dissent will be waiting, ready to explain the truth that was there all along.