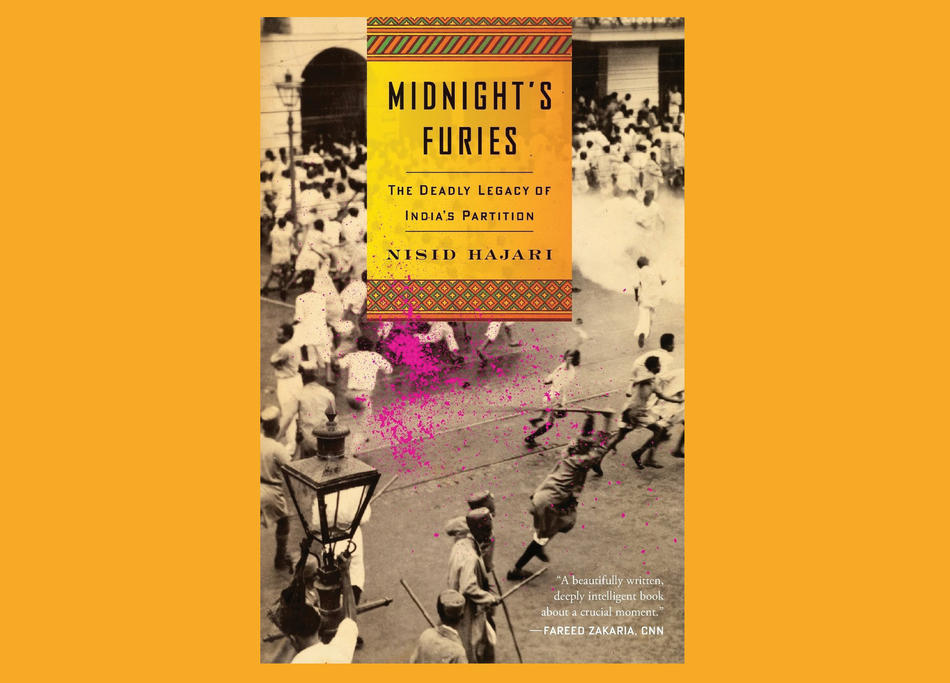 Picture two political rivals, both lawyers educated abroad, both secular intellectuals in a land of intense religious belief, and both lonely young widowers. One would remain alone following the death of his much younger wife. The other would embark on an affair that only intensified the hatred and distrust between them.

The men were Jawaharlal Nehru, the first prime minister of India, and Mohammad Ali Jinnah, the founder of Pakistan and its first governor-general. In the late 1940s, while their personal lives were in turmoil, so were their countries, and the bitter rivalry between the nations has lasted for more than seventy years.

Nisid Hajari ’96GSAS doesn’t go so far as to suggest that the bloody battles of India’s Partition can be traced to romantic jealousy, but his canny exploration of how individual personalities shape world history makes Midnight’s Furies: The Deadly Legacy of India’s Partition a fascinating, provocative, and ultimately heartbreaking read.

Hajari, who ran international coverage at Newsweek before recently joining Bloomberg News, studied comparative literature at Columbia, and it shows in his skilled storytelling. He sets up his key participants like characters in a novel: “On paper, Nehru had much in common with Mohammad Ali Jinnah, the most powerful Muslim leader in India ... Both were proud, rigid men — and dangerously thin-skinned.” Once independence from the British empire seemed imminent, each man started jockeying for control. Nehruh envisioned a religiously and culturally diverse nation, though Hindus dominated local politics. Jinnah, president of the Muslim League, saw the coming independence as his chance to establish Pakistan, which he envisioned as an autonomous democratic Muslim state.

In Hajari’s telling, both men were motivated by political, not religious, goals. Jinnah, while Muslim, drank alcohol, ate pork, and visited mosques to give speeches, rather than pray. Nehru was openly secular, and blamed religious zealotry for many of India’s problems. But both leaders were skilled at exploiting the fears and prejudices of their more devout countrymen. Jinnah, as publisher of the Muslim newspaper Dawn, ran editorials warning that once Britain left India and the Hindu-led government took power, “the rape of the Muslim nation is to begin in a more ruthless and criminal manner than Hitler and Mussolini dared in Europe.”

That analogy soon proved more literal than hyperbolic, though Muslims would be antagonists as well as victims. On August 16, 1946, riots broke out in Calcutta following Jinnah’s calls for a “direct action.” By the time the carnage was over, the city had been nearly razed, with “mounds of decomposing, liquefying bodies, heaped as high as the second floors of the nearby houses.” Photographer Margaret Bourke-White said the scene reminded her of Auschwitz.

“Direct Action Day marks the moment when the political battle between Hindus and Muslims — until then waged around negotiating tables and in debate halls — turned violent,” Hajari writes. “The question of who launched the first blow is thus freighted with immense meaning: the guilty party is, by extension, held to be responsible for the hundreds of thousands of deaths to come.” The narrative of Muslim aggression is integral to the way India makes sense of Partition, he writes, but may not be accurate: “Ultimately, it is not possible to assign blame entirely to one side or the other. What exploded so suddenly in Calcutta in August 1946 were the pent-up fears of communities convinced that they faced imminent subjugation by the other.”

While both Jinnah and Nehru publicly decried the violence, and the country fell in the grips of aggression and retaliation, they stubbornly resisted attempts to broker a truce. Stoking the conflict was an unlikely third player — Mahatma Gandhi, who, as Nehru’s mentor, counseled against compromise if it meant prolonging the British presence. “If India wants her bloodbath,” Gandhi declared, “she shall have it!”

As the violence escalated, Britain withdrew from India in August of 1947, ten months ahead of schedule, and with the official border between India and the new nation of Pakistan still unresolved. In the Punjab region, the epicenter of the border dispute, entire communities were destroyed. Trains filled with refugees fleeing the region arrived at their destinations eerily silent, their cars dripping with the blood of passengers who’d been slaughtered en route.

When Nehru finally conceded, in 1949, the fighting officially ceased, but the conflict was far from over: “Nehru’s long battle with Jinnah had ended. The rivalry they had bequeathed their nations, and the world, had barely begun.” The deep rift of resentment and distrust between the two countries is particularly still evident in conflicts over the border territory of Kashmir.

In the final pages of the book, Hajari convincingly describes how the “fury” created by Partition fomented enduring suspicion and hostility between the countries. He links Pakistan’s involvement with the Taliban and alliances with terrorist groups in Afghanistan to the country’s fear of Indian aggression. His prophecy for the future of relations between the two countries is not optimistic: “The rivalry is getting more, rather than less, dangerous,” he writes. But perhaps the most chilling aspect of Hajari’s book is the way he pinpoints the moments when history could have gone a different, more peaceful way, had the two leaders been able to put aside their differences and unite for the sake of their newly independent nations.