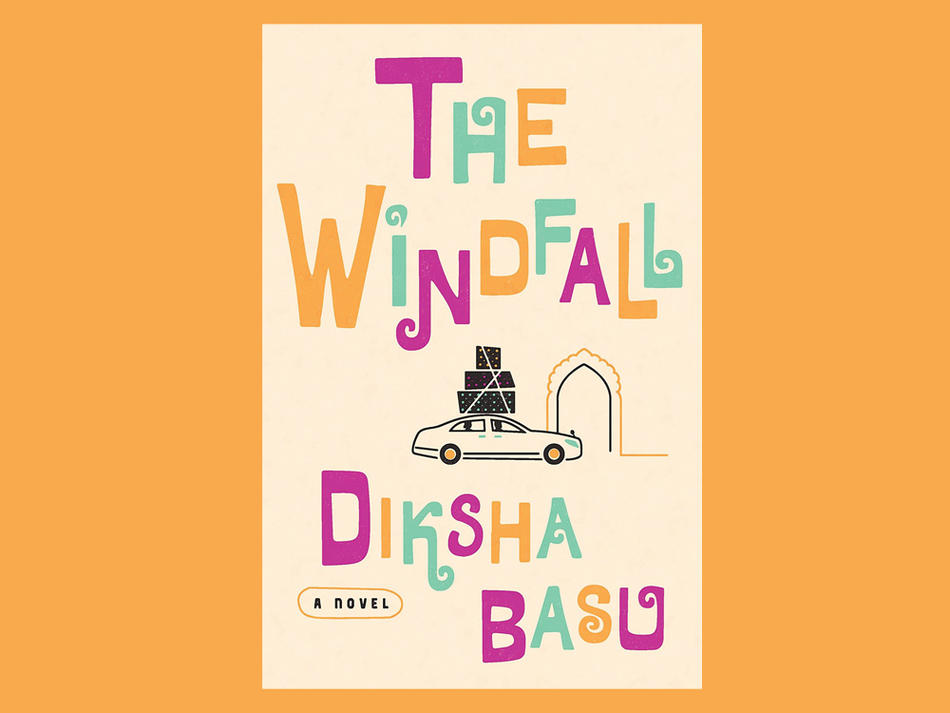 “Mr. Jha had worked hard, and now he was ready to live well.”

So begins The Windfall, a breezy comedy of manners set against the complex social ecosystem of New Delhi. At the beginning of this debut novel, by travel writer and actress Diksha Basu ’14SOA, the Jha family is preparing for a big move. Mr. Jha — fifty-two years old and nearing the end of his career as a computer programmer — has just unexpectedly sold a website for ten million American dollars. Now he and his wife are leaving their cozy middle-class housing complex in East Delhi for the quiet, cloistered suburb of Gurgaon.

Not surprisingly, things quickly go awry. Mrs. Jha is homesick for her friends and neighbors; she prefers bucket showers to the fancy fixtures in Gurgaon, and she doesn’t want to drive the new Mercedes. Mr. Jha, on the other hand, is obsessed with keeping up with the Chopras, the ostentatious neighbors next door. Meanwhile, the Jhas’ son Rupak, a middling MBA candidate in America, worries about whether to tell his parents about his white girlfriend. Will his mother be disappointed? Might his newly aspirational father see her as a status symbol?

The Windfall is a perfect beach read, a sugary confection of a book that has already been optioned by Paramount for a television show. The repartee is fun and often outrageous, particularly as Mr. Jha and Mr. Chopra become embroiled in an arms race of opulence. When thieves try to scale the wall that surrounds the Jha house, Mr. Chopra gets jealous: “Not a single thief had tried coming into the Chopras’ property. It was worrying.” Mr. Jha buys a Swarovski-crystal-studded sofa to impress the neighbors, only to find out that small pieces of glass are actually not terribly comfortable. And on it goes.

But there is also a profound sadness to the satire. Mrs. Jha’s pain is palpable — she never asked for this life and doesn’t know how to feel at home in it. Mr. Jha is so riddled with anxiety that even he can’t enjoy Gurgaon. He’s spent years coveting the shoe-shining machines at Delhi’s fancy hotels. But when he buys one and unloads it from his car, Mr. Chopra thinks that he’s getting rid of one belonging to the home’s previous owner and praises him, calling the machine old-fashioned. Embarrassed, Mr. Jha returns it immediately.

One particularly troubling piece of collateral damage is Rupak. Before the move, Rupak’s job prospects had been a source of pride. But Mr. Jha finds that, among the super-rich, it’s trendy to discourage your child from getting a job, since it proves that you have enough money to provide for him. Like the shoe-polishing machine, Rupak is an outdated dream.

Basu, a native of New Delhi, is adept at navigating the complicated tiers of a society that has been ruled for generations by a rigid caste system. It’s important that this is not a rags-to-riches tale of an untouchable making good. Even before the windfall, the Jhas had good jobs and maids of their own. As Rupak says, when trying to explain his homeland to his American friends: “His India was neither rich nor poor. There were no huge homes and elaborate weddings, nor were there slums and water shortages and child laborers. The middle ground was too confusing to explain to an outsider.” But Basu, in this entertaining tale, does so admirably.

Top Stories
The Simple Questions That Can Prevent a Suicide
Book Review: Horse
Lets Talk About Sex on YouTube
New Smart Helmet Could Spot Concussions in Real Time
How the Mankiewicz Family Got Their Hollywood Ending
All categories >
Read more from Rebecca Shapiro