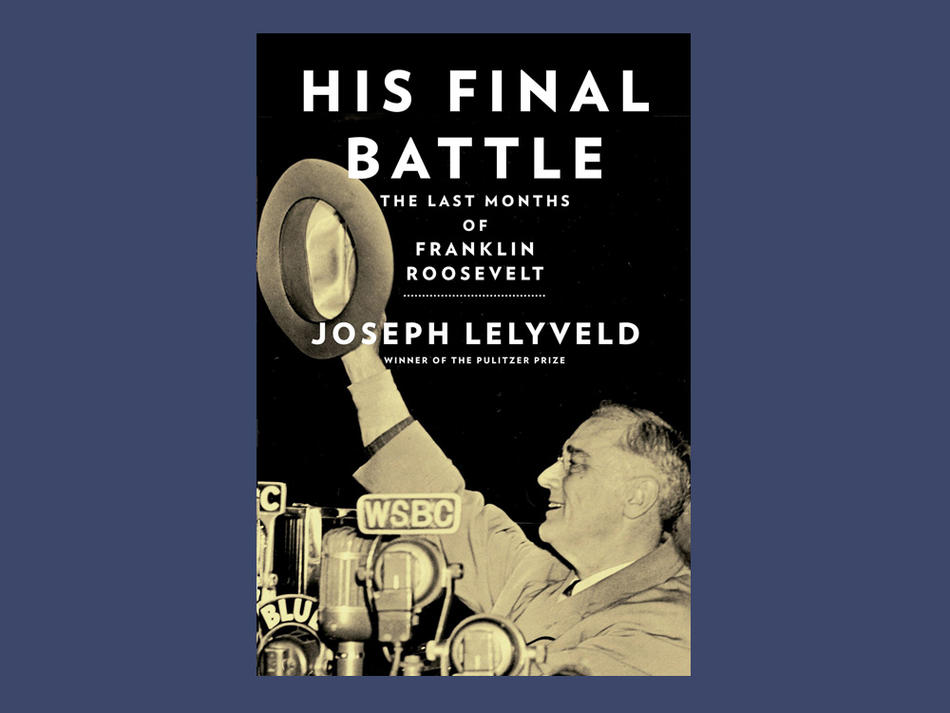 On September 11, 2016, Hillary Clinton nearly collapsed while leaving an event in Lower Manhattan. Hours later, under pressure from reporters, her campaign admitted that she had been battling pneumonia. For Clinton, the incident was a double blow — it fueled conspiracy theories that she was in frail health, and seemed to confirm the charge that she was not always forthright with the public. Over the next few days, Clinton’s polling numbers dropped to their lowest point of the summer. With health, stamina, and transparency at the center of the 2016 election, it seems almost inconceivable that less than a century earlier, an American president was able to conceal his inability to walk from public view, and to wield political influence on a global scale even as he rapidly approached his death.

In His Final Battle, a meticulously researched examination of the last eighteen months of the life of Franklin Delano Roosevelt, Joseph Lelyveld ’60JRN paints a portrait of a carefully protected patriarch, whose failing health is kept secret not only from the American people but to a considerable extent from the president himself. FDR was just sixty-two when he undertook an unprecedented fourth campaign for the presidency in 1944, but he was worn out, not just from guiding his country through twelve years of economic privation followed by world war, but from hypertension and congestive heart failure. While the long conspiracy of silence around Roosevelt’s health problems is well documented — health problems that began with his contracting polio at the age of thirty-nine — Lelyveld makes palpable the high cost of that secrecy. Perhaps the book’s most sobering revelation is the degree to which this towering figure was running on fumes during his final year and half; the effort required to keep going, the author makes clear, eventually claimed his life.

FDR’s stamina was particularly put to the test on the international stage, where, with wars to win on two fronts, he pursued a punishing schedule. In the summer of ’44, shortly after being re-nominated, he embarked on a five-week, press-embargoed trip to the West Coast and the Pacific Islands, stopping in Pearl Harbor to talk strategy with a skeptical General Douglas MacArthur. (Afterward, the notoriously arrogant general deemed his commander in chief “a man of great vision — once things are explained to him.”) The following January, he left for the Crimean resort of Yalta, where the Big Three powers drew up a plan to reorganize Europe after the war; FDR’s goal there was to avoid the fate of Woodrow Wilson, who failed to secure a permanent peace after World War I.

As readers witness the gravely ill president heading inexorably toward death, the heart-sinking what-ifs mount. Had Roosevelt been well, or had someone else been president, how many failures might have been turned into triumphs? At Yalta, Roosevelt and Churchill wrested a promise from Stalin to preserve democracy in Poland and the rest of Eastern Europe; but with the Soviets already occupying those countries, the promise was empty, and the region succumbed to communism for the next half century. As Roosevelt lobbied to organize a homeland in Palestine for the displaced Jews of Europe, the Saudi king Ibn Saud warned him, “Arabs would choose to die rather than yield their land to Jews”; Roosevelt was greatly affected by the meeting, but little came of it. As for the international peacekeeping organization envisioned by FDR, led by “the Big Four (or Five) standing together under the UN aegis,” Lelyveld, with twenty-twenty hindsight, writes, “Faced with many-sided civil wars, involving what are now called ‘violent non-state actors,’ with terrorism and mass migration spilling across regions and borders, they seldom stand together.”

But perhaps no what-if is more painful to contemplate than the dropping of atomic bombs on Hiroshima and Nagasaki. While acknowledging that most Americans believe “the atom bombs ended the war,” Lelyveld hints that Roosevelt — always a “creative procrastinator” — might have chosen to prod Japan into surrender with a mere public test of the bombs’ destructive power, had he lived past April.

Obviously, we’ll never know what path FDR would have followed. He died without sharing his thoughts with Truman, and the rest — sigh — is history. Such speculation, however, does lay to rest one contrarian myth that made the rounds in the 2016 election cycle — that with so much governing taking place in cities and states on the one hand and courts and Congress on the other, perhaps it doesn’t really matter in the long run who the president is. It matters, and Lelyveld knows it. In his skillful rendering, even a tragically diminished Franklin Roosevelt looms as large as ever.