By Jeffrey A. Lieberman, with Ogi Ogas 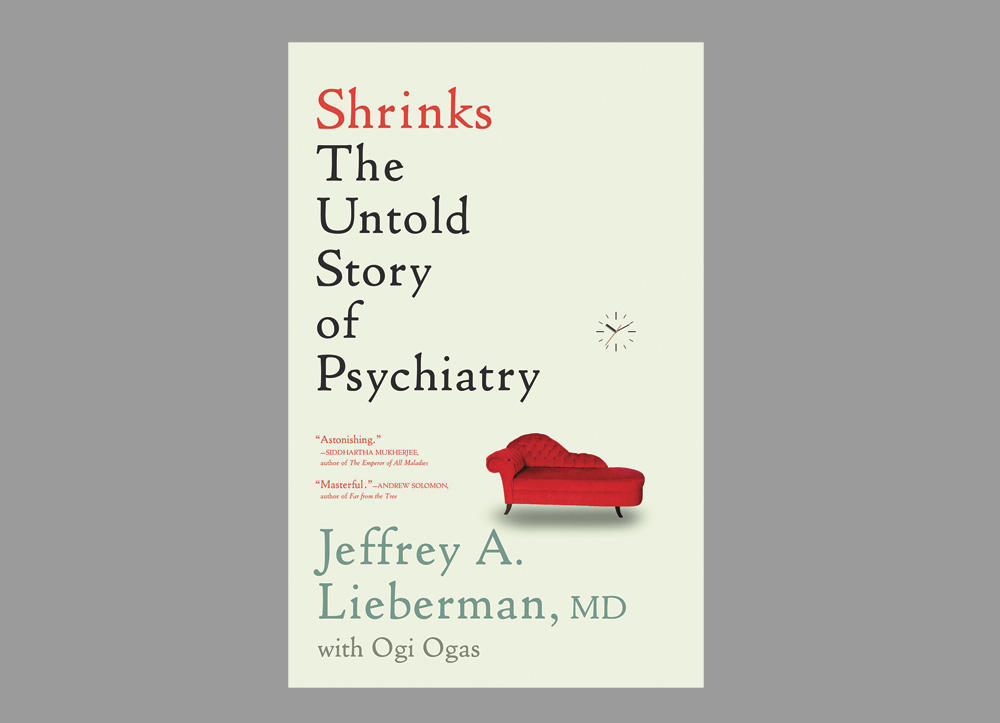 In the annals of medicine, few disciplines have endured more controversy than psychiatry. In fact, as Shrinks — a methodical, fluidly written history of the field — convincingly demonstrates, psychiatry truly has been “the most distrusted, feared, and denigrated of all medical specialties.”

No author is better positioned to tell this fraught, fascinating story than Jeffrey A. Lieberman: former president of the American Psychiatric Association, chairman of psychiatry at the Columbia College of Physicians and Surgeons, director of the New York State Psychiatric Institute, and psychiatrist in chief of New York-Presbyterian Hospital.

Lieberman’s stature in his field does not prevent him from opening his book with a fearless declaration “to provide an honest chronicle of psychiatry with all its rogues and charlatans, its queasy treatments and ludicrous theories.” He serves as the consummate guide to a profession that, due to lack of tangible evidence, “has always been susceptible to ideas that are outlandish or downright bizarre”: the deplorable insane asylums, the fever therapies, the induced comas, the lobotomies.

But Lieberman is not interested in just chronicling the titillating aspects of psychiatry’s history. From a variety of angles and historical perspectives, he probes two central questions: what is mental illness, and how do we treat it? No matter how far afield he roams, those two questions always inform his narrative. Readers follow along each step of the way forward — and occasionally backward — in the development of psychiatry, but Lieberman never loses that thread, nor his commitment to candor.

Certainly, Sigmund Freud looms large in any discussion of psychiatry, and Lieberman affords him an appropriately sized portion of the story. Refreshingly, Lieberman both rescues Freud from anathema and pointedly examines his many shortcomings. While Freud “provided the first plausible means by which psychiatrists could understand and treat patients,” he also undoubtedly suffered from megalomania and placed far too much emphasis on the value of psychoanalysis without the benefit of a true understanding of the mechanics of the brain — a development that was to come later. Eventually, as Lieberman astutely concludes, “psychoanalysis cross[ed] over from a medical profession into a human potential movement” and “assumed the trappings of a religion.” From there, it was a natural progression to the proliferation of alternative forms of therapy, including, most ominously, Scientology.

While Freud takes center stage, Lieberman also gives weight to countless other important pioneers in the history of psychiatry, including Franz Anton Mesmer, the first to reject moral or religious failing as the primary cause of mental illness; Philippe Pinel, who fought against the horrific conditions in asylums; Emil Kraepelin, “the founder of the modern system of psychiatric diagnosis”; Walter Freeman, who performed the first lobotomy; Columbia neuroscientist Eric Kandel, whose painstaking experiments led to some of “the most important foundational principles of modern neuroscience”; Aaron T. Beck, the developer of cognitive-behavioral therapy, or CBT; and Columbia psychiatrist Robert Leopold Spitzer ’66PS, the architect of the DSM­-III, the third edition of the Diagnostic and Statistical Manual of Mental Disorders, which, according to Lieberman, “might just be the most influential book written in the past century.”

First published in 1952, the DSM encapsulates all the controversy over definitions that has surrounded psychiatry from the beginning. It’s a case study that gets to the heart of Lieberman’s two central questions, and he spends a few chapters exposing the inner workings of the process behind the book’s creation and development. Spitzer’s DSM­-III, writes the author, was largely praised for having “turned psychiatry away from the task of curing social ills and refocused it on the medical treatment of severe mental illnesses” — a vital advance. While the DSM­-IV flew under the radar, the DSM­-5, published in 2013, has been prominently criticized for “pathologizing normal behavior.”

Regardless, Lieberman is adamant about the value of the DSM and its indispensable information, and his defense and discussion of the manual leads into a long, in­-depth analysis of posttraumatic stress disorder, a hot­-button issue in modern psychiatry. Thankfully, for the millions who suffer from some form of mental illness, “contemporary psychiatrists hold a pluralistic view of mental illness that embraces neuroscience, psychopharmacology, and genetics.” It’s an optimistic assessment of the state of the field that gives one hope for the future.

Top Stories
The Simple Questions That Can Prevent a Suicide
The Troubling Legal Implications of Overturning Roe
How the Mankiewicz Family Got Their Hollywood Ending
Lets Talk About Sex on YouTube
Book Review: Horse
All categories >
Read more from Eric Liebetrau