Book Review: "Too Much of a Good Thing"

How Four Key Survival Traits Are Now Killing Us. By Lee Goldman (Little, Brown and Company) 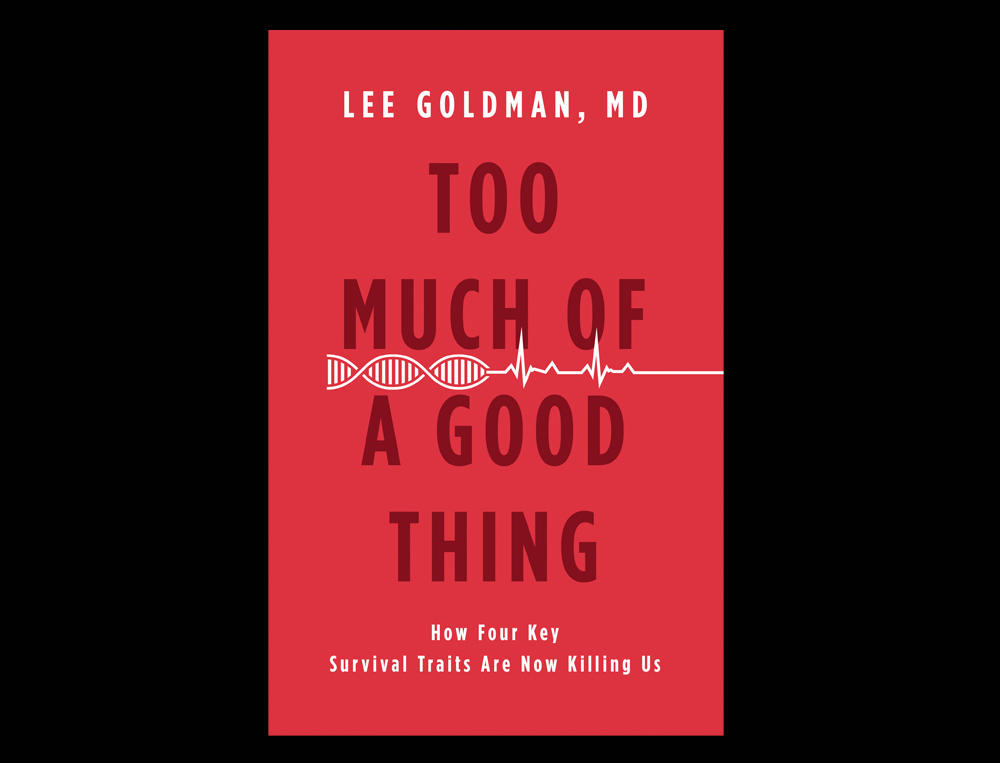 If your New Year’s resolutions to eat better, exercise, and stress less are already a dim and distant memory, perhaps you shouldn’t blame it on your weak willpower but on your stubborn genes.

According to a new book by Lee Goldman, dean of the faculties of health sciences and medicine at Columbia University Medical Center, our cravings for salty french fries, our tendency to eat past the point of satiety, and even the twinge of anxiety we feel when we step on the scale are all survival mechanisms that have been hardwired into the human body over some two hundred thousand years.

Once, these and other impulses helped to protect Homo sapiens against starvation, dehydration, violence, and bleeding, but, Goldman warns, genetic traits that served Paleolithic hunter-gatherers do not suit “a species of gradually aging, sedentary people who live indoors, ride in cars, take elevators, and may or may not engage in occasional exercise.” As a result, he argues, the traits designed to help us survive have paradoxically become our greatest killers.

Goldman, a renowned cardiologist (he developed the Goldman criteria, guidelines that determine which patients with chest pain require hospital admission, and the Goldman index, which predicts which patients will have heart problems after surgery), delivers a clear-eyed account of how our bodies have fallen out of sync with our environment.

He reminds us that, in just two hundred years, industrial and technological revolutions have completely transformed our world. Adaptation, of course, takes place over tens of thousands of years, so “we’re stuck with genetic traits that were finely tuned over millennia to deal with a pre-industrial age.”

Goldman’s argument may bring solace to those who find it difficult to kick their bad habits. He tells us that we overeat and store the excess calories because our ancestors did not have a consistent food supply and needed to gorge when calories were at hand.

Our preference for salty foods is also biological, since salt helps us retain water and avoid dehydration, but as we age, excess salt can lead to high blood pressure and damage our hearts, kidneys, and blood vessels.

We have developed fears, hyper-vigilance, and aggressive tendencies because these defensive instincts help us avoid getting killed by our enemies. Today, Goldman argues, “the anger that used to be directed externally toward other people is now increasingly directed internally, where it’s manifested as anxiety and depression.” Suicide, he observes, is the tenth most common cause of death in the United States.

A fourth survival trait, a blood-clotting system that saves us from bleeding to death if we are grievously injured, is of course still essential. However, as our bodies age and become more sedentary, that clotting mechanism can become deadly. In America, according to Goldman, “diseases caused by clots — heart attacks, clotting strokes, pulmonary embolism, and the like — cause about 25 percent of all deaths, more than four times the number of deaths caused by all forms of bleeding.”

Though Goldman’s message is alarming, it’s not pessimistic. Even while the author is demonstrating our biological inability to adapt to a rapidly changing world, it’s obvious that he is in awe of the body and its miraculous complexity. While on the subject of dehydration, for example, Goldman describes in elegant detail the wonder of our sweating mechanisms. He marvels at the prodigious output of our eccrine glands, which can evacuate “as much as 3.5 quarts per hour in a highly acclimated person living in the tropics,” and at the fact that the evaporation of sweat produces a cooling power equivalent to four thousand BTUs.

The author has faith that science and modern medicine will help save us from ourselves. He points out that medications that treat high cholesterol, depression, and high blood pressure are already helping us adapt. He also believes that as we enter a new era of personalized and precision medicine, it will be entirely possible to manipulate our genomic profile so that we might silence or deactivate genes that don’t serve us anymore.

Goldman, who has published more than 480 medical articles, writes that he has done his best to make the book “as scientifically rigorous as possible while still being understandable and, I hope, enjoyable for a broad audience.” He has succeeded in these goals. Goldman’s argument is both clear and compelling, and the book is full of fascinating offbeat facts and figures. Is the book enjoyable? Yes. But once readers begin to understand that the body’s survival mechanisms are now responsible “for more than six times the number of deaths they prevent,” they might describe this book differently. Perhaps the words “alarming,” “concerning,” or even “slightly terrifying” might be more apt.