18 movie (and book-to-movie) characters who graced the Morningside Heights campus.

College alumnus Herman Wouk ’34CC wove his alma mater into The Caine Mutiny, his 1951 Pulitzer Prize–winning novel set on a destroyer ship during World War II. Columbia appears in an early chapter when protagonist Willie Keith enrolls in the University’s midshipmen’s school. (Yes, Columbia did train naval officers during WWII.) The book inspired a 1954 film adaptation, with Robert Francis in the role of Keith.

Stanley Kubrick’s 1962 adaptation of Lolita doesn’t provide much biographical information about antagonist Clare Quilty, played by Peter Sellers. But in the controversial 1955 novel by Vladimir Nabokov, we learn that the character was “educated at Columbia University.”

Before becoming an ’80s icon as the star of Miami Vice, Don Johnson made his film debut in the 1970 film The Magic Garden of Stanley Sweetheart, a little-known relic of counterculture cinema. Johnson plays Stanley Sweetheart, a Columbia student and aspiring filmmaker who spends his college days getting high, sleeping around, and hanging out with hippies in Greenwich Village.

Dustin Hoffman stars as Thomas “Babe” Levy, a Columbia PhD student who becomes entangled in a criminal conspiracy, in the 1976 thriller Marathon Man. William Goldman ’56GSAS, who wrote the 1974 novel on which the film is based, also penned the screenplay.

In The Rock, a 1996 action thriller set on Alcatraz Island, in San Francisco Bay, FBI chemical-weapons expert Dr. Stanley Goodspeed (Nicolas Cage) is introduced as having a BA from Columbia and a PhD from Johns Hopkins.

The sixth volume of The Princess Diaries, the 2000–2015 young-adult book series by Meg Cabot, shows love interest Michael Moscovitz heading off to Columbia for college. In the 2001 film adaptation of the first volume, however, Moscowitz (Robert Schwartzman) is still in high school.

In the 2002 thriller Panic Room, Jodie Foster plays Meg Altman, a divorced mother who moves into an Upper West Side apartment with plans to study at Columbia. Not only is the home spacious and conveniently located near campus; it also contains a safe room that proves useful when a group of armed burglars show up.

America Ferrera stars as Ana García in Real Women Have Curves, a 2002 dramedy about a working-class Los Angeles teenager determined to go to college. In between high school and working at her family’s run-down garment factory, García applies to Columbia and (spoiler alert) gets accepted with a full scholarship.

As told in the original Marvel comics, “Daredevil” Matt Murdock studied at Columbia Law School before becoming an attorney by day and crime-fighting superhero by night. In the 2003 Daredevil movie, Ben Affleck stars as Murdock alongside Jennifer Garner and Jon Favreau, who play fellow Columbia Law alumni Elektra Natchios and Foggy Nelson, respectively.

Kate Hudson stars as Andie Anderson in 2003’s How to Lose a Guy in 10 Days, a key rom-com of the early aughts. Anderson, a women’s magazine writer and a graduate of Columbia Journalism School, puts her reporting skills to work when she writes an in-depth article on everything not to do at the start of a relationship.

Released in 2008, Revolutionary Road is based on the 1961 Richard Yates novel about middle-class malaise in 1950s suburbia. The drama marked the first (and still only) reunion of Leonardo DiCaprio and Kate Winslet as romantic leads since Titanic. DiCaprio plays Frank Wheeler, a restless New York City salesman who, according to the book, studied at Columbia College.

In P.S., a 2004 film based on the novel by Helen Schulman ’86SOA, Topher Grace plays F. Scott Feinstadt, an applicant to Columbia’s School of the Arts who has an (extremely unethical) affair with an admissions officer, played by Laura Linney. At the end of the escapade, Feinstadt receives an acceptance letter.

In the 2007 rom-com I Think I Love My Wife, Chris Rock plays Richard Cooper, a married banking professional who flirts with infidelity when he reconnects with an attractive old friend, played by Kerry Washington. A Columbia diploma displayed in Cooper’s office reveals that he’s an alumnus.

At the end of The Nanny Diaries, a 2007 comedy based on the book by Emma McLaughlin and Nicola Kraus, Annie Braddock (Scarlett Johansson) leaves her stressful job as an Upper East Side nanny and applies to graduate school for a master’s in anthropology. Although Columbia isn’t explicitly mentioned, Braddock is shown holding application materials while sitting on a fountain outside Low Library.

It’s rare for Columbia to be mentioned in a Bollywood film, but in the 2007 Indian hit Ta Ra Rum Pum, Rani Mukerji plays Radhika Banerjee Singh, a pianist who meets her future racecar-driver husband while studying in the University’s music program.

Pass the Remote: 6 Women Shaping the Future of TV

These alumnae directors, screenwriters, and producers have found enviable success in the streaming era

Radio Made the Video Stars 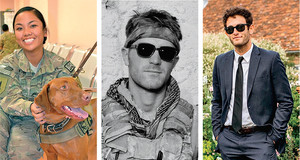