Ecologists are studying new ways to protect the cats’ need to roam.

There are fewer than five thousand wild tigers left in the world, and more than half of them are in India, which in recent years has taken aggressive steps to protect its big cats and their habitats. But in trying to save these iconic creatures from extinction, Indian authorities are finding that the needs of tigers are coming into direct conflict with those of humans. This is because a tiger, in order to properly feed itself and avoid inbreeding, cannot be confined to a single nature preserve, of which India now has more than a dozen, but must be free to roam between them, inevitably passing through forests and grasslands that are undergoing rapid human development.

How can India support these animals while limiting the risks they pose to people?

A multi-institutional group of ecologists led by Ruth DeFries, a co–founding dean of the Columbia Climate School, recently published a study that could help Indian officials establish safer and more sustainable development policies by identifying tracts of land outside nature preserves that tigers are likely to use for travel. The authors say that their study, which synthesizes massive amounts of ecological and geospatial data that their teams have previously published separately, will enable officials to make better-informed decisions about where to locate infrastructure like roads, railways, mines, reservoirs, and housing developments — all of which can obstruct tigers’ migratory routes and expose people to attacks.

“Tigers can roam very long distances — sometimes hundreds of miles — and many rural communities living along the cats’ routes have learned to coexist with them,” says Jay M. Schoen, a Columbia graduate student who led the data analysis along with Amrita Neelakantan ’19GSAS of the Network for Conserving Central India. “However, major infrastructure projects through landscape corridors can alter or restrict tiger movement patterns. Our maps can help wildlife managers, policymakers, and other stakeholders strike a balance between maintaining landscape connectivity and building infrastructure needed for economic development.”

This article appears in the Fall 2022 print edition of Columbia Magazine with the title "Where tigers still roam." 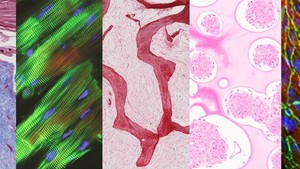 Biomedical Engineers Can Now Watch Our Organs Talk to Each Other

In a plastic device the size of a credit card, tissues communicate with each other through a shared blood supply