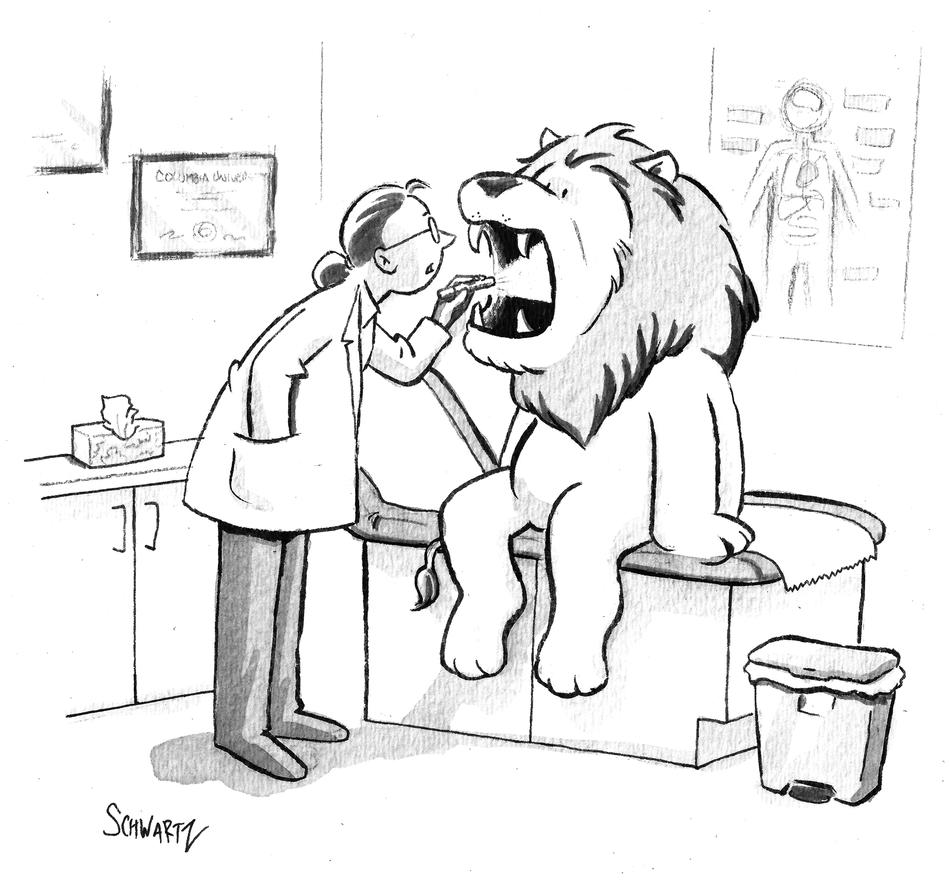 “You’ve got to stop swallowing your pride.”

In the Great Minds Think Alike department, we received twenty-two submissions of “Say Roar” and sixteen of “Roar, Lion, Roar.” Four alumni found Dr. Livingstone. Jimmy Hoffa was also located, as was, somewhat disturbingly, Dorothy. Indeed, the lion had swallowed a lot of things: zebras, flashlights, Christians, a zookeeper, a tricycle, the Princeton tiger, and — wince — Barnard (Marilyn Aron ’52BC).

Diagnoses were in no short supply. The Lion had liongitis. Or the election-season strain, lyinitis (Sherrie Dulworth ’13JRN). Stephanie Denzer ’09CC offered, “Well, you’re healthier than the donkey and the elephant I gave checkups to this morning,” while Ausama Abdelhadi channeled a single-payer future: “Before universal health care we had to lick our wounds.”

Yes, the lion was ill. He needed a Roar-schach test. He needed a CAT scan. He was eating too much red meat (Joe Karlesky ’72GSAS). He had hoof-and-mouth disease (Carol Mick). “Sore, Lion, Sore,” suggested Tom Seaman ’82CC. Lillian G. Nash, age ten, also cited Oz: “It looks like you have a bad case of the Cowardly Lion.”

If the lion was not ill, he was perhaps too spirited: ten savvy readers made reference to lines in the Columbia fight song, including “I suggest that you take a break from waking the echoes of the Hudson Valley” (Robert M. Levine ’68CC). And, as Joseph Greenberg reminds us, high spirits are just around the corner from heartburn: “How long have you been a Columbia football fan?”

No shortage of wit, but there could only be one winner. That entry, chosen by the cartoonist, reveals how wording can make all the difference. Four entries played on the same pun, but one got it just right. We asked Schwartz how he chose the winning caption, by Joe Maguire ’89GSAPP. Schwartz responded, “Simple: it made me laugh.”