Inside the Decade that Transformed Wall Street, by Jonathan A. Knee (Oxford University Press). 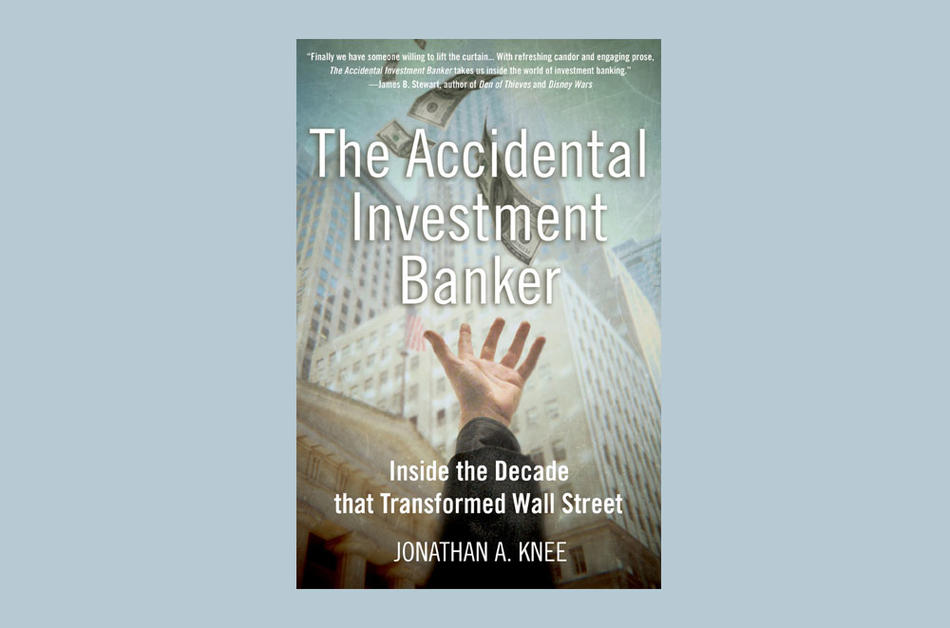 Despite the title of his new memoir, Jonathan Knee’s career is no accident. As an MBA student at Stanford, Knee got a taste for investment banking during a summer internship at Bankers Trust in London — compiling information on the chicken-processing industry. He left uninspired. But when facing unemployment years later, he jumped at a friend’s offer to work on media mergers and acquisitions at Goldman Sachs.

Like any money man worth his weight, Knee knows how to lock a deal. When opportunity knocks, handcuff it and stuff it in the trunk. And landing a high-powered gig guiding megamergers is no more an accident than the coy title of this entertaining tell-nearly-all about the dynamic shift in Wall Street culture during the Internet boom and bust of the 1990s.

By suggesting he stumbled into hardball finance, perhaps Knee — now a lawyer and an adjunct professor at Columbia Business School and director of its media program — wants to say he’s not of that world, although he has succeeded in it. Then again, it’s hard to know. The Wall Street portrayed in The Accidental Investment Banker can be summed up with one word: artifice.

In Knee’s tale, investment bankers treat personal relationships and values as if they were the latest Paris fashions. And when a banker gets what he wants, principles are flung off like lingerie.

What might surprise jaded readers is that Wall Street wasn’t always that way. Or, at least, it wasn’t as bad. As late as the 1980s — before Michael Milken, junk bonds, and the movie Wall Street — competing firms rarely attempted to steal one another’s clients, worked well together when necessary, and even avoided raiding one another’s firms to hire away talent. The movie’s success, Milken’s infamy, and the end of fixed transaction commissions all led to a greater public understanding that there was a profession called investment banking, where bankers got rich. Suddenly the profession had new players — smarter, more analytical, mostly trained as MBAs — with a different value system.

Knee’s story centers around observations about the decline of traditional relationship-centered values and their replacement by more transaction-oriented, short-term thinking. “In place of [the] ideal, a culture of contingency emerged,” he writes, “a sense not only that each day might be your last, but that your value was linked exclusively to how much revenue was generated for the firm on that day.”

What Knee does not do is provide the context for this shift. Before the advent of the personal computer, the very actions that made up the investment banker’s world — preparing scenario analysis, setting a price on a stock or a company, documenting a transaction, having a prospectus printed — all took weeks. Changes could not be made with just a phone call. Profits were to be found in maintaining (and exploiting) long-standing relationships, because the time and cost to chase and win new business was substantial.

Computers changed all that. Scenario analysis now takes minutes. Printing is electronic. Clients can run their own spreadsheets. On paper, at least, transactions represented the fast lane to greater profits.

Knee worked at Morgan Stanley in 2004 when its former partners waged a very public war with then-CEO Phil Purcell to have him replaced with one of their own, John J. Mack. This battle was portrayed in public as the clash between the relationship folk (“the grumpy old men”) and the transaction folk (Purcell and his crew). Purcell’s Dean Witter, Discover (once a part of Sears) had taken over the once-revered Morgan Stanley on the strength of its transaction-oriented business. The firm’s retail accounts and its Discover credit card were all about transactions. But, when the market slows and the economy weakens, so too does the ability to squeeze extra profits from chasing transactions and retail accounts; instead, one must offer to do things “cheaper.”

Wall Street reacted to this need for lower fees by cutting high-charging Morgan Stanley’s stock price sharply. In response, what Knee and the grumpsters portrayed as a clash of values was actually another attempt at artifice — if we can demonstrate that transactions and retail are out, then Wall Street will believe that the old Morgan Stanley is back — to drive up the stock price. It worked. Knee uses the event to establish the book’s transaction vs. relationship leitmotif.

Knee misses the opportunity to use a different motif — personal choice. In Exit, Voice, and Loyalty: Responses to Decline in Firms, Organizations, and States, published in 1970, Albert O. Hirschman argues that within a flagging institution, one can choose among only three alternatives: leaving to avoid the conflict at hand, giving voice to the conflict, or being quiet (and thus loyal). Each of Knee’s examples evokes these three choices. In 1995, when Knee decides his boss John Thornton’s days at Goldman in London are numbered, he opts to move to New York (exiting). He chooses to couch the departure in apparent loyalty to Thornton (“I’ll be your man in NY”), yet debates whether to tell Thornton the truth (“I cannot risk my career on your success any longer” — giving voice). Similarly, when in 2001 the time comes to fight for his job at Morgan Stanley, he again chooses to exit, allegedly to create time for an academic career. Giving voice to his concerns, misgivings, and observations might cost him future business (after all, he will remain an investment banker), and thus artifice replaces voice and silence is maintained.

Ultimately, Knee reveals bankers as people whom most of us would not seek as friends. They stab one another in the back, tell lies, chase money at the expense of family and friendships, and place a monetary value on nearly everything. Loyalty is entirely to self — usually an unexamined and poorly understood self. As Knee writes in describing his choice to leave for a boutique firm, more money, and a more secure future: “I found myself fantasizing about unrealistic strategies to reverse a situation that evidently could not be reversed. I also felt deep shame for abandoning those who had worked closest with me and would face an uncertain future.” Many bankers whom Knee portrays inspect their lives only when looking back at a professional disaster.

In relating his tales, Knee hints at many questions of ego, money conflicts, loyalties, and betrayals. Why did that person leave? Why did this person give voice? Why did this other one — whose private misgivings Knee discloses — stay silent and loyal? Therein lies some deep understanding of those strange creatures called investment bankers. Unfortunately, Knee has left out the answers to these questions. It may be the lawyer in him. Or his adherence to a Wall Street code of honor. He is now a managing director at the Evercore Partners investment banking boutique, and he still deals with these people. By obscuring the elements of personal choice and defining the questions as transactions versus relationships, Knee seemingly wishes to shield his friends, competitors, and colleagues from being judged as human. Their choices are abstract and their conflicts are only about business. It’s another artifice.