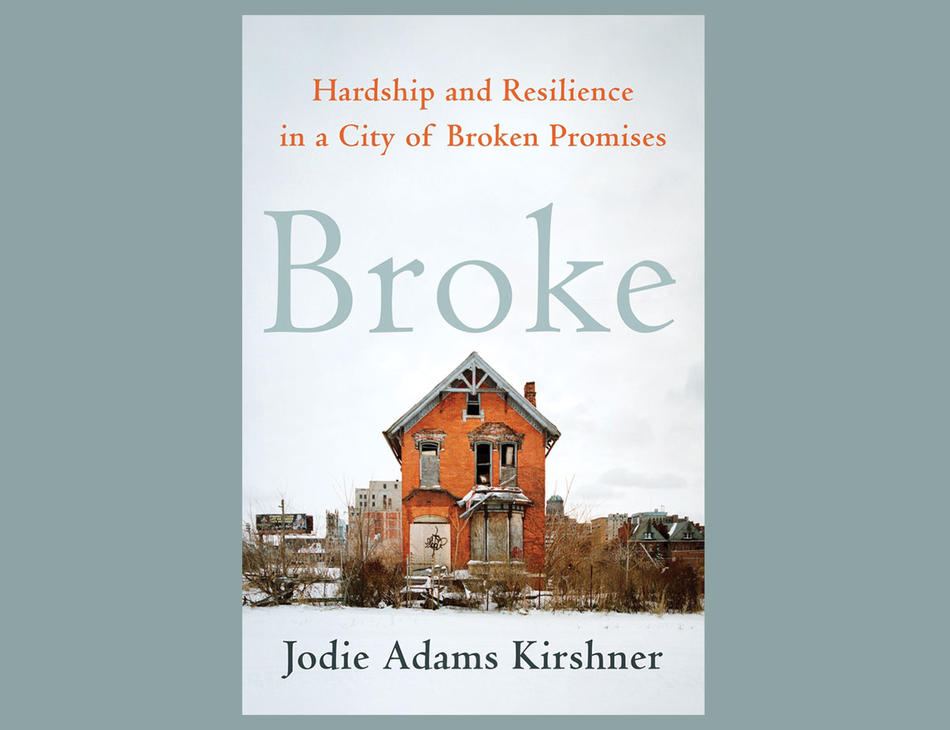 Outside of immigration, few political or social issues engender as much heated debate as income inequality. For decades, the gap between the haves and have-nots has been growing, and today millions of Americans face a daily struggle to maintain financial solvency and stable housing.

Countless newspaper and magazine articles, academic studies, and popular books — a notable recent example of the last category being Matthew Desmond’s
Pulitzer Prize–winning Evicted — have explored these issues. While most of these texts aim to investigate the systemic problems that contribute to cyclical poverty, Broke, from Jodie Adams Kirshner ’02JRN, ’06LAW, stands apart from the rest by focusing on one misguided policy response and the resulting devastating consequences. She focuses solely on the city of Detroit — most significantly, on its uphill battle back from bankruptcy and how that has affected tens of thousands of its most vulnerable citizens.

Kirshner claims that “bankruptcy and the austerity it represents have become a common ‘solution’ for struggling American cities” — and Detroit, which filed for Chapter 9 bankruptcy in July 2013, is the largest American municipality ever to do so. As a well-regarded expert in bankruptcy law, Kirshner, who is currently a fellow at Columbia Law School’s Center for Contract and Economic Organization, is admirably equipped to examine the often misunderstood concept of an entire city going broke, and she proves herself an adept guide to this complex situation.

But what does bankruptcy — and the ensuing spending cuts — mean for the residents of a city already deeply plagued by economic decline? Kirshner provides plenty of statistics, which demonstrate with acuity the interconnectedness of income and housing inequality, urban fiscal policy, population decline, and tax-base erosion. But the heart of this book is her powerful human-interest stories, which are likely to have the most significant impact on readers.

Drawing on more than two hundred interviews, Kirshner brings us an unforgettable cast of characters, including Miles, a Black construction worker in his mid-forties fighting to stay afloat as mistakes from his past threaten to derail his future; Robin, a white developer in her late forties seeking fortune by flipping properties in Detroit’s dilapidated and vacant neighborhoods; and Lola, a twentysomething, college-educated Black single mother looking for whatever work she can find.

In telling these stories, Kirshner is clear about her desire to expose the myth of the American dream: the idea that all people, no matter their circumstances, can pull themselves up by their bootstraps and succeed. Nearly all of Kirshner’s subjects demonstrate the falseness of the classic Horatio Alger narrative, and a theme of the book is that hard work is not nearly enough to counter decades of poor — and often racist — fiscal and social policies. Consider that in the 1950s, Detroit offered federally insured mortgages for whites only, a policy that was in place for decades in many areas of the US; or that, because of predatory banking practices and opportunistic developers, “between 2005 and 2015, mortgage foreclosure turned 100,000 Detroit homeowners into renters, eliminating wealth from local families and from the city”; or that “between 2000 and 2012 the number of employed Detroiters fell by nearly 55 percent.” According to Kirshner, all of these factors combine to create an atmosphere in which it’s nearly impossible to succeed and thousands of law-abiding, hard-working citizens are getting left behind.

Unfortunately, notes Kirshner, these circumstances are not unique to Detroit. Similar situations plague cities throughout the country, and failing to address these problems at their root leads to further economic and social degradation.

While bankruptcy protection might seem like a simple solution for economically depressed cities, Kirshner is clear in her belief that this is not the answer. While Detroit has exhibited signs of resilience, and flashy headlines and trendy social-media posts paint a rosy picture of its “comeback,” Kirshner’s portrait shows that the city and its residents are still struggling. “The ingredients needed to produce successful cities,” she writes, “are simply more complex than those needed to produce successful businesses.”