Review: "Dancing in the Dark"

A Cultural History of the Great Depression, by Morris Dickstein '61CC (W.W. Norton). 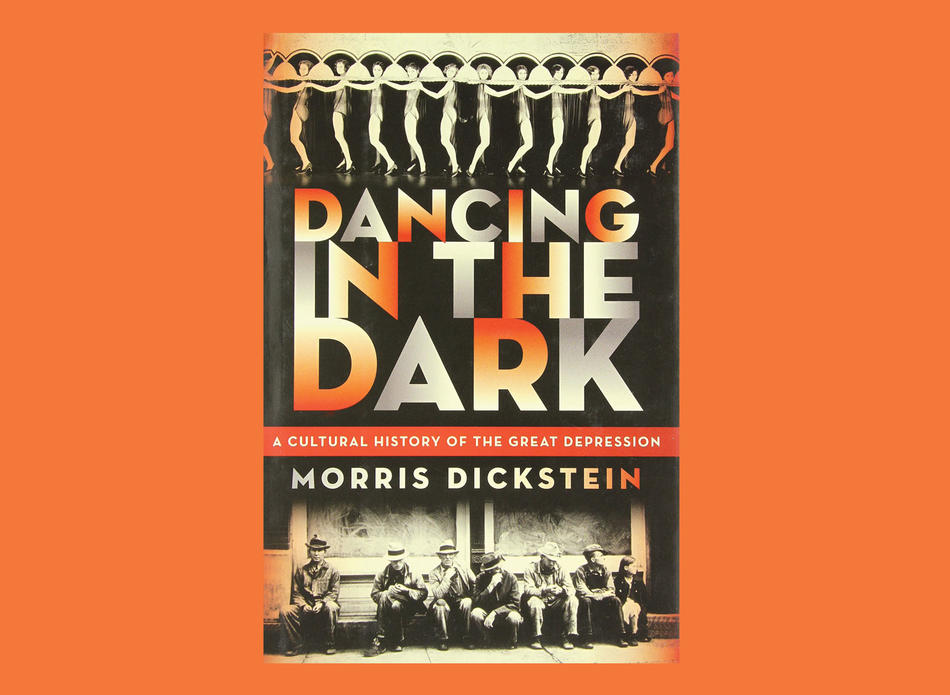 In his poem “September 1, 1939,” W. H. Auden famously labeled the 1930s “a low, dishonest decade.” Symbolically, if not quite according to the calendar, the thirties began with the Wall Street crash of 1929 and ended with the opening shots of World War II in 1939; in between came the rise of Hitler in Germany, the purges of Stalin in the Soviet Union, the civil war in Spain. The United States did not face catastrophe on the same scale, but to those who lived through them, the American 1930s were awful enough. It was the era of the Dust Bowl, Okies, sit-down strikes, breadlines, the demagoguery of Father Coughlin and Huey Long — and always, behind everything, the demoralizing, incurable Depression.

Yet as Morris Dickstein ’61CC shows in Dancing in the Dark, his wide-ranging new survey of what he calls Depression Culture, the same decade that brought America so much suffering was also a golden age for the arts. If you were to make a list of the most lovable and glorious things ever produced in this country, a surprising number of them would date to the thirties. There are the later songs of the Gershwins and Cole Porter; the dances of Fred Astaire and Ginger Rogers; screwball comedies like Bringing Up Baby and gangster pictures like Scarface; the art music of Aaron Copland, the folk music of Woody Guthrie, and the jazz of Louis Armstrong; the moralizing novels of John Steinbeck and the corrosive satires of Nathanael West; and the art deco designs that made everything from skyscrapers to radios look like bullets speeding into the future.

Dickstein discusses all these things, and many more, in order to show how the Depression “kindled America’s social imagination, firing enormous interest in how ordinary people lived, how they suffered, interacted, took pleasure in one another, and endured.” That social interest, Dickstein argues, is what unites all the different aspects of thirties culture, from the proletarian novel to the Hollywood movie. Before the Depression, and after it, America was the land of the individual; its favorite myths all had to do with the unaided self, whether in the form of Emerson’s self-reliance or of Horatio Alger’s self-made millionaires. With the seeming collapse of the free market, however, Americans were forced, sometimes against their will, to consider the virtues of solidarity. As Dickstein puts it, “the arts bound people together in a collaborative effort to interpret and alleviate their plight.”

Politically, of course, this new spirit took the form of the New Deal. But as Dickstein shows, it was no less important in shaping American culture. Sometimes the connection between the two realms is clear, as in Steinbeck’s heavy-handed protest novel The Grapes of Wrath. “The hero of the book,” Dickstein points out, “is not a family but more of an abstraction, the people.” As Ma Joad puts it, “us people will go on livin’ when all them people” — the exploiters, the capitalists, the landlords — “is gone. Why, Tom, we’re the people that live. They ain’t gonna wipe us out.” The book’s famous last scene, where a mother whose baby has died breastfeeds a starving stranger, is Steinbeck’s searing emblem of the need for cooperation to overcome a disaster too great for any one man to cope with.

Yet if Steinbeck “makes the migrants’ cause feel truly American,” Dickstein shows that many other Depression writers were less certain of their ability to embrace the common man. Provocatively, Dickstein reads The Grapes of Wrath alongside Miss Lonelyhearts, where West views the suffering of ordinary men and women through the ludicrously distorted lens of a popular advice column—the “cry for help from Desperate, Harold S., Catholic-mother, Broken-hearted, Broad Shoulders, Sick-of-it-all, Disillusioned-with-tubercular-husband.” Dickstein shows how West’s hero, the eponymous columnist, ends up numbed by so much suffering, and is “catapulted into a realm of dementia beyond feeling.”

Another kind of paralysis afflicted James Agee, whose collaboration with the photographer Walker Evans yielded one of the iconic books of the Depression, Let Us Now Praise Famous Men. Dickstein reminds us of the true strangeness of that book, in which Agee — a Harvard-educated journalist working for Fortune — struggles for hundreds of pages with his inability to really capture the plight of the southern sharecroppers he is writing about. “If I could do it,” Agee says, “I’d do no writing at all here. It would be photographs; the rest would be fragments of cloth, bits of cotton, lumps of earth, records of speech, pieces of wood and iron, phials of odors, plates of food and of excrement.”

As Dickstein comments, this “apotheosis of the real, the material…is typical of the 1930s.” You can see it in many of the books he writes about, from Michael Gold’s Jews without Money, about New York Jews, to Zora Neale Hurston’s Jonah’s Gourd Vine, about Florida blacks, to James T. Farrell’s Studs Lonigan trilogy, about Chicago Irish. None of these novels is very well known today, but each was a pioneering attempt to bring the actual experience of America’s poor into literature.

Few of the highbrows’ attempts to speak for the people were actually popular, however. (Agee’s book, Dickstein notes, was “one of the spectacular publishing flops” of its season, and did not become well known until the 1960s.) What really drew “the forgotten man” — that much-talked-about icon of the Depression years — were not realistic treatments of his own plight, but movies and songs that offered a window onto another world. “What movies lacked in realism,” Dickstein writes, “they supplied in fantasy — escapist fantasies with fairy-tale endings as well as more darkly etched fables that enabled people to tap into their fears and work them through.”

For sheer escape, Hollywood offered lavish musicals and fast-talking comedies. Dickstein writes lovingly about films like The Gay Divorcee, in which Rogers and Astaire showed how “seemingly mismatched people can connect beautifully to form a little community of two, in which all awkwardness and inhibition are soon banished and all movement is unimaginably graceful, fluid, purposeful, and lovely.” Yet he also pays attention to the darker fantasies that animated gangster movies like Little Caesar, with Edward G. Robinson, or The Public Enemy, with James Cagney. Such movies allowed “the audience to identify with the flawed protagonist, not just with his success but with his style and audacity, his gift for bold gestures and self-dramatization.” That these antiheroes were doomed only made them more attractive because they were more plausible to Depression-era audiences.

Dickstein, Distinguished Professor of English and Theatre at the CUNY Graduate Center, is one of our best literary and cultural critics, in part because he writes with more personal passion and engagement than academics usually do. The many subjects he treats in Dancing in the Dark are tied together by his central argument about the power of the arts to unite and inspire in dark times, but Dickstein also relishes each book, song, and movie for its own sake, and his pleasure is infectious. As he says, the artists he writes about may have been “dancing in the dark, but the steps were magical.”