The Wars for the Twenty-First Century, by Philip Bobbitt. 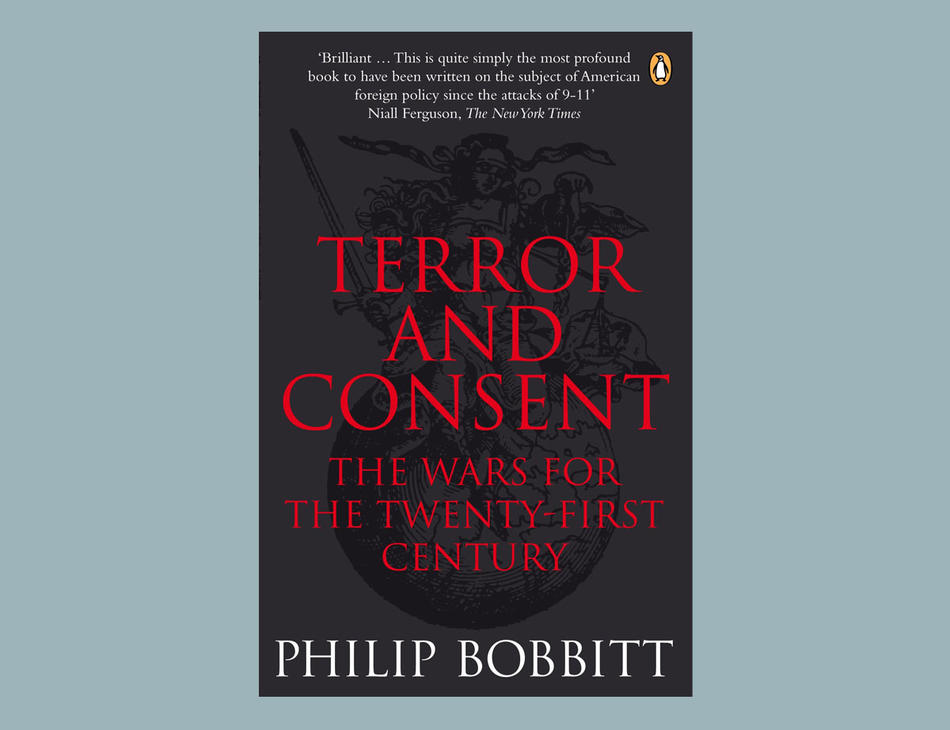 Among the many consequences of the attacks by al-Qaeda against the United States on September 11, 2001, has been a torrent of writings by intellectuals seeking either to explain modern terrorism or to propose ways of dealing with it—or both. No author, however, has approached the subject with greater ambition than Philip Bobbitt, the Herbert Wechsler Professor of Federal Jurisprudence at the Law School and director of the Center for National Security at Columbia. Perhaps Bobbitt’s penchant for Bigthink is a family trait; he is a nephew of President Lyndon B. Johnson, known for pursuing Texas-sized goals in both domestic and foreign affairs. Early in Terror and Consent Bobbitt declares that “every widely held idea we currently entertain about twenty-first century terrorism and its relationship to the Wars against Terror is wrong and must be thoroughly rethought.” This book, he tells us, is his effort “to begin this fundamental rethinking.”

Constructing such an all-encompassing theory is indeed a massive undertaking. Bobbitt’s arguments sprawl over hundreds of pages; and he displays his erudition in nearly every paragraph. The following is a partial list of the persons, places, concepts, and events Bobbitt discusses: Parmenides’ Fallacy; Benjamin Franklin; the Bohemian Revolt; Guy Fawkes; the Barbary Pirates; Hurricane Katrina; the Monroe Doctrine; several landmark decisions of the U.S. Supreme Court; the Reagan Doctrine; the writings of Professor S. F. C. Milsom — and, of course, al-Qaeda.

These are marshaled in support of Bobbitt’s fundamental claim: that each historical era has its characteristic “constitutional order.” The nation-state dominated the 20th century, as the competing imperial “state-nations” of Europe dominated the 19th, and so on back to the “princely states” of Renaissance Italy. Yet each constitutional order called forth a corresponding form of terrorism, like so many evil doppelgängers. These terrorisms “reacted against the values while mimicking the techniques of the prevailing constitutional order.” Thus the absolutist crowned heads of Europe faced anarchist assassins in the 19th century; the U.S. and its allies around the world faced “national liberation movements” in the 20th.

In Bobbitt’s view, the fall of the Berlin Wall signaled not only the end of the Cold War but also the beginning of the end of the nation-state. The emerging constitutional order is that of the “market state.” Whereas the nation-state — whether Communist, Fascist, or parliamentary — derived its legitimacy from a promise to secure the welfare of a particular national group, the market state, which can also be more or less democratic, makes a grander promise to its citizenry. “Market states say: Give us the power and we will give you new opportunities,” Bobbitt writes. They favor capitalist incentives over regulation, outsourcing over bureaucracy, and global economic interdependence over self-sufficiency.

Therefore, 21st-century terrorism will be market-state terrorism — global in scope, flexible in organization, and utterly opportunistic. Market states facilitate information sharing through the Internet for commercial or entertainment purposes. But market-state terrorists can exploit that same network to find out how to buy or build weapons, including weapons of mass destruction. If the market state itself seems an increasingly borderless entity, terrorist groups will operate from no particular headquarters and assemble cadres from every country on the planet. Al-Qaeda, Bobbitt writes, is already a kind of “virtual state.”

The political goal of market-state terrorists is to destroy market states of consent—Bobbitt’s term for post–Cold War democracies such as the U.S. and the U.K. (where he maintains a second home)—and to replace them with market states of terror. As Bobbitt uses the phrase, state of terror is a pun: It means either a public gripped by fear, or an actual polity governed by totalitarian means as opposed to consensual ones. He is not always perfectly clear which one market-state terrorists are out to create. But the implication is plain enough. Unlike the more focused terrorists of previous ages, today’s globalized terrorists are potentially much more destructive, on a much wider scale, and they “win” if states of consent become so desperate for security that they abandon their democratic ways.

Given this argument, Bobbitt is surprisingly sympathetic to the Bush administration, whose invasion of Iraq he considers a defensible attempt to deny market-state terrorists a potential ally in the pursuit of weapons of mass destruction. He adds that he “do[es] not believe that . . . the Bush administration has dramatically curtailed the constitutional rights of Americans.” He faults the Bush administration instead for neglecting the links between law and military strategy. The administration has simply claimed various legal powers — such as the power to confine terror suspects indefinitely at Guantánamo — rather than engaging with Congress and allied countries to modify existing law, domestic and international, in accordance with the new challenges posed by 21st-century terrorism. The result has been a crippling lack of legitimacy for the American war on terrorism.

This plea for a new fusion of law and strategy is surely Bobbitt’s strongest point. If, indeed, the Wars against Terror, as Bobbitt calls them, are with us for the long term, then they must be pursued on the basis of clear rules that strike most Americans — and most people in the watchful global village — as fair. In arriving at this sound conclusion, however, Bobbitt leaves several questions unanswered along the way. His treatment of al-Qaeda, which he regards as merely the harbinger of even more dangerous global terrorist organizations, devotes oddly little attention to the Islamist ideology of Osama bin Laden and his followers. Perhaps the market state calls forth its own terroristic enemy, in some deterministic fashion, but why, exactly, is it that Islamist extremists dominate market-state terrorism, and is there any realistic prospect that any other ideology will take its place?

Then there are the trade-offs involved in battling terror, as he defines it. If we are in a war against terror, and if terror includes not only the fear induced by the likes of al-Qaeda, but also, as Bobbitt suggests, the panic wrought by ethnic cleansing or by natural disasters such as Katrina, then where exactly does the waging of war end and “ordinary” government begin? Bobbitt’s “principal recommendation . . . is that we pay more attention to our vulnerabilities.” But those are as limitless as the human imagination, as Bobbitt’s musings about weaponized Ebola viruses and nuclear strikes by eco-extremists show. Some threats are far more plausible than others; governments have to choose accordingly when allocating scarce resources.

In fairness to Bobbitt, though, that is not his principal concern. The challenge of Terror and Consent — its demand that we think anew in this new era — may resonate more with his fellow intellectuals than with policy makers: Indeed, it may be aimed more at the former than the latter. Whatever its ultimate impact, the sheer breadth and audacity of Bobbitt’s book ensure that it cannot be ignored.