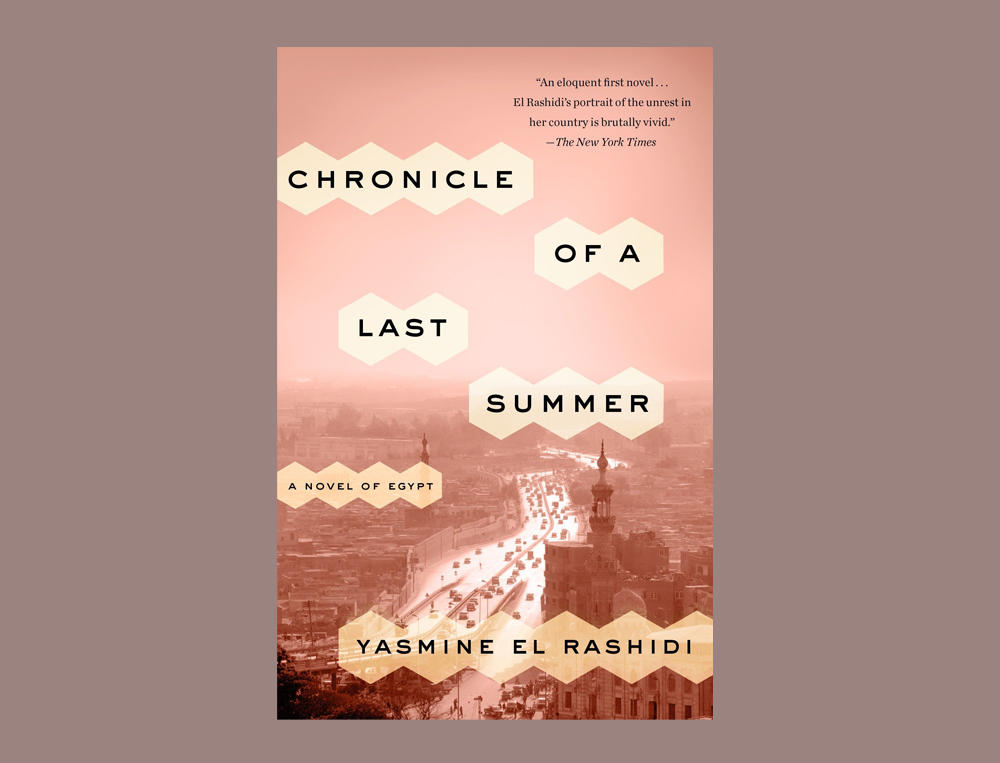 In the summer of 2014, a young filmmaker sets up her camera across the street from a vegetable stand, hoping to capture scenes of everyday life: “The better tomatoes on top, the bad ones hidden underneath. One minute, three minutes, five. If nobody bothered me I would have let the camera roll all day.” In the United States, the scene would be innocuous. But she is in Cairo, still reeling from the Arab Spring, which escalated after a Tunisian fruit vendor set himself on fire. As the filmmaker in Yasmine El Rashidi’s novel Chronicle of a Last Summer learns, when you live in a country ruled by suppression and misinformation, even the groceries can be incendiary.

El Rashidi’s novel, which details three tumultuous decades in Egypt, is divided into three sections, set in 1984, 1998, and 2014. In the first section, the unnamed narrator is six years old. Her father has recently disappeared, and her mother is struggling to keep control of her emotions and her household. On TV, reruns of Dallas are interspersed with hagiographic documentaries about the late president Anwar el-Sadat — at least until the power cuts out each night. All the narrator knows is that she misses her father and doesn’t understand why he’s gone, but she won’t get answers from her mother, who spends her days lying on the sofa, talking on the phone in a mixture of Arabic, English, and French.

Fourteen years later, the narrator has more empathy for her mother’s apathy; she feels her own confusion paralyzing her: “It seems that politics is at the foreground and background of everything yet not something that can be impacted in any way.” Her cousin Dido, an anarchist, is the “only person I know who speaks of changing the country.” She is thinking of making films. She misses her father viscerally — “the sound of his breath as he wound up his wristwatch. How he gestured with his hands as he spoke” — but is resigned to never seeing him again.

In the final section, the narrator is considering switching from film to writing, despite Dido’s belief that “writing in a country like ours [is] an exercise in passivity, a luxurious musing.” She spends her time in cafes with Dido, debating whether literature can shape history. She wanders the city, talking about Egyptian music with shop owners. And she drinks coffee with her father, whose return is marked with little fanfare and no explanation.

El Rashidi ’99JRN, a journalist who grew up in Cairo, has said that while her novel is not strictly autobiographical, she wanted to capture “how we came to be muted in the way we were, and perhaps still are.”  We see an example of this lassitude in a long passage describing an afternoon waiting for a doctor’s appointment, while indifferent receptionists lazily discuss recipes and eat sandwiches, instead of expediting the process. It perfectly captures the ennui, lethargy, and sense of powerlessness that many of the narrator’s generation experience in the face of crushing bureaucracy. Yet we never learn why, exactly, the narrator has gone to the doctor, which creates a distancing effect. It’s just one of the myriad omissions and elisions that keep us from really getting to know the narrator, undermining the power of this otherwise vibrant and vital book.