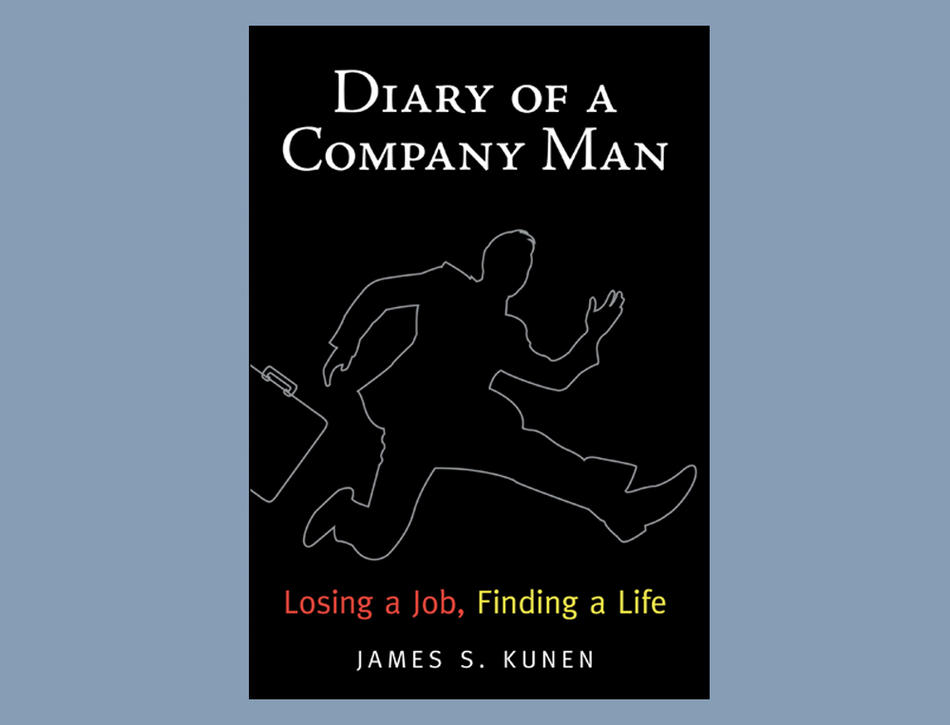 “I’m like Jonah in the whale,” James Kunen ’70CC writes in the October 27, 2000, entry of his diary-style chronicle of midlife redemption Diary of a Company Man: Losing a Job, Finding a Life. The whale was the newly merged entity of AOL Time Warner, and Kunen, a celebrated scribe of the 1960s student antiwar movement, had become its director of corporate communications. “How the hell am I going to tell you the inside story?” he says to his imagined readers. “I can’t see a fucking thing! I’m in the belly of the beast.”

Kunen ends up telling a different inside story: that of his own spiritual rebirth after eight years in a job that he doesn’t believe in but performs exceedingly well. His duties include writing speeches for AOL Time Warner chiefs Gerald Levin and Steve Case and a column for the house organ Keywords emphasizing employee uplift in the face of mass layoffs. When he comes across a muckraking website’s attack on Keywords headlined “Internal AOL Time Warner Newsletter Rallies the Troops by ‘Humanizing’ Leadership,” which calls the journal “old-fashioned hucksterism, mixed with lessons from management seminars,” Kunen writes, “I can just picture the angry young man writing these scathing criticisms. He looks a lot like me twenty years ago.”

Or longer. For those familiar with Kunen’s first book, The Strawberry Statement: Notes of a College Revolutionary, a wise, funny, dazzlingly precocious account of the Columbia student uprisings of 1968 written when Kunen was nineteen, the spectacle of the fifty-something author trembling inside the whale feels like a cosmic joke. “How did a youthful idealist end up as a corporate flack?” Kunen writes at the outset, speaking for many an educated, middle-class radical, just as he had done in The Strawberry Statement. “God, I don’t know. It’s not something I planned.” There is real despair here, but the simple answer is that Kunen, who had once toiled as a public defender and later as a public-interest journalist, and who has two kids, needs the paycheck, and each time AOL Time Warner plumps his bank account with a direct deposit he is “suffused with a feeling of well-being that lasts for several hours.”

Then it’s back into the existential pit. Kunen feels guilty “spending ten minutes of the company’s time e-mailing the president of Egypt, asking him to grant clemency to a woman sentenced to hang for the murder of her husband.” He befriends homeless men on the streets outside company headquarters and admits, “I like the idea of homeless outreach work, but I don’t do well with horrific odors and running sores and bare feet with grotesque black nails.” A secular Jew, he teaches English one night a week at the Arab American Association in Marine Park, Brooklyn. He feels a “secret shame” in the face of plumbers and electricians, whose know-how he values above his own. And he has at least one awkward encounter in an elevator with a company bigwig. Here he runs into AOL Time Warner COO Dick Parsons. The men exchange pleasantries, and Parsons, upon exiting, tells Kunen to “have a good day.”

“‘Have a productive day,’ I replied, in the grip of some sort of madness. Thank you would have sufficed.

“‘I’ll do my best,’ he said sourly, looking distinctly unamused.”

Kunen, shaken at having overstepped his bounds, likens his reply to “slapping the queen on the back.”

Funny stuff, but the laughs come easier because we know up front that the story will not play out as tragedy, that we will not see Kunen, his soul finally depleted, making a self-mocking speech at his no-frills retirement party. Nor is there any dramatic “take this job and shove it” moment; Kunen isn’t a nut. Instead, in February 2008, AOL Time Warner, in another round of cost cutting, axes Kunen, or, to extend the whale metaphor, vomits him up Jonah-style. Kunen is honest enough to express anger and hurt at his impersonal treatment at the hands of an entity he compares to “The Blob” and from which he could not have honestly expected better. Jobless at sixty, Kunen is “Too Young to Retire and Too Old to Hire,” and here, a third of the way through, the book’s focus shifts: Kunen must now find meaningful work or drown in a sense of worthlessness.

He decides he wants to tutor immigrants, something that had given him satisfaction in the past. He volunteers to teach ESL at the International Rescue Committee and applies to tutoring agencies and language schools. No one seems interested. Meanwhile, wanting to write about “work and the loss of work,” he travels to interview a retired autoworker named Ed Booth (who gives a beautiful and memorable monologue about assembly-line life) and a woman named Esther Keeney, who nearly committed suicide and later found peace as a volunteer parish nurse. He reads Man’s Search for Meaning, by the psychiatrist and Holocaust survivor Viktor Frankl, whom he quotes: “I could show that this neurosis [the feeling of meaninglessness] really originated in a twofold erroneous identification: being jobless was equated with being useless, and being useless was equated with having a meaningless life.”

Jobs eventually come through for Kunen. We sit in on lessons, meet the students, and hear their stories, which Kunen gathers like a field collector. There’s the Muslim Iraqi couple Muhie and Suad (Muhie was a chemistry professor in Baghdad); a doorman named Reggi who taught history in Kosovo; and the courageous Sachiko, who when asked to use the word “hardly” in a sentence, says, “I have hardly any hope that my physical problems will get better.” All the while, Kunen struggles to stay afloat emotionally; he identifies with the immigrants who have left behind high-status occupations and must start over. He picks up another job teaching wealthy international students (though he’d rather teach poor refugees) and finds his class biases challenged by, among other things, a Japanese heiress’s painful inferiority complex. (“Lesson for me: Affluent people are people, too. They can need help, and sometimes you can help them. You take your meaning where you find it, not necessarily where you expect it.”)

As he teaches, Kunen reports that “I’m gaining an awareness of my own language.” He must have had a similar reaction crafting euphemisms for Keywords, but here the engagement is positive, the learning difficult and alive. The quirks of English, seen through the eyes of his students, become riddles that Kunen must solve with clever pedagogical ploys. Kunen finds all this fulfilling but also plunges periodically into depression over his small, unheralded life — feelings that vanish the instant he returns to the classroom.

Diary of a Company Man, in its empathy, its cynical but tender social outlook, and its diaristic device, can read as a bookend to The Strawberry Statement. Coming more than forty years later, it is inevitably a darker, less mannered, more hardheaded book. Kunen’s wisdom and perceptions flow as ever from his bell-clear prose, and his elemental sweetness imbues even his crankiest moments with likability. In a characteristic passage, he writes, “I love my students, and I love loving them, and I love their loving me — or, should I say, the character I play at the front of the classroom — funny, engaging, patient, kind — nothing like I am the rest of the day and night.”

If Kunen, cast out from the whale’s belly, is rising to a new purpose, then a conversation about Jonah that Kunen had with a friend in the Time Inc. cafeteria back in November 2000 takes on a prophetic glimmer.

“I would assume that being in the whale’s belly is a metaphor for the quiescent period of the hero,” the friend tells Kunen. “There are many heroic tales in which the hero gives up his crusade and leads a domestic life, but then a new cause arises and he picks up his sword and crusades again.”