A Prosecutor's Thoughts on Crime, Punishment, and the Rule of Law. By Preet Bharara '93LAW (Alfred A. Knopf). 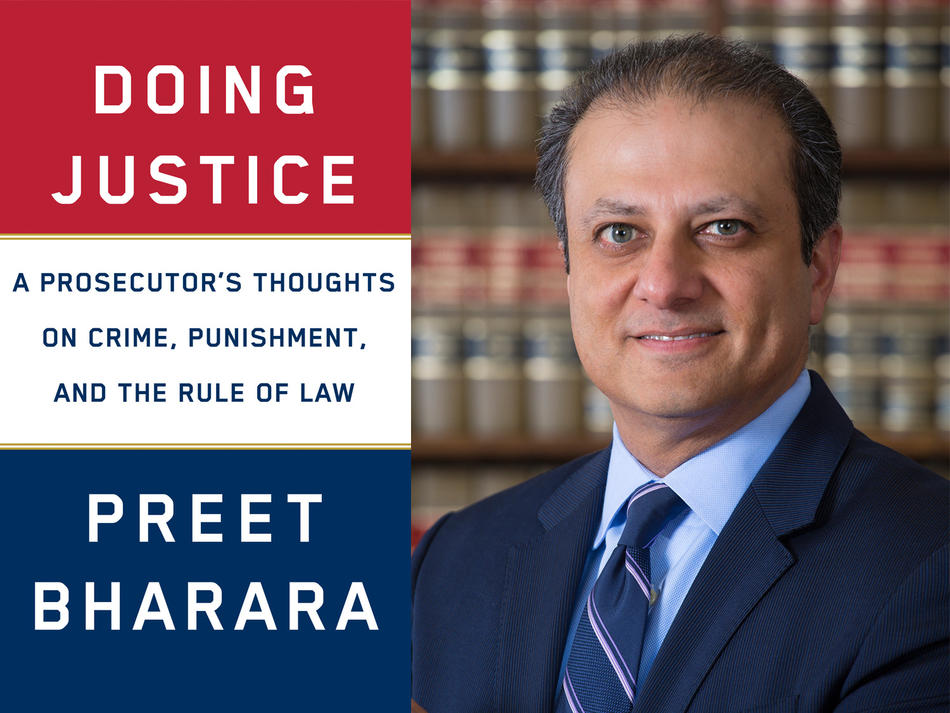 Preet Bharara ’93LAW, the celebrated former United States attorney for the Southern District of New York, could have written a juicy memoir. He certainly had plenty of material to work with. There was the 2016 meeting in Trump Tower when the president-elect slapped him on the back and encouraged him to remain in the powerful post he had held for almost a decade. There were the times during the presidential transition, after the FBI had begun its investigation of Russian meddling in the election, when Bharara dodged a series of calls from the president. And there was the day in March 2017 when Attorney General Jeff Sessions called on all Obama-appointed federal prosecutors to resign. Bharara was fired when he would not comply.

But Bharara didn’t write that tell-all. Not even close.

Instead, while others went low, Doing Justice goes high. It is both an eloquent appeal for a return to a time when the law was backed by a system of agreed-upon norms and a sober warning about the dire consequences of descending into a lawless society.

“The rule of law and faith in the rule of law, the state of judicial and prosecutorial independence, the meaning and primacy of truth — all are in question and under fire in numerous ways,” Bharara writes in the preface. “Our adversaries are not our enemies; the law is not a political weapon; objective truths do exist; fair process is essential in civilized society.”

It’s hard to imagine a better leader to remind us of these nobler instincts. During his years as US attorney, Bharara was known for aggressively fighting public corruption, and he has a keen and deep appreciation for the values that define the rule of law: procedural fairness, independence from political influence, and respect for — as he writes — “truth, dignity, and justice.”

Born in India to a Sikh father and a Hindu mother, Bharara moved to America when he was two years old. After graduating from Harvard College and Columbia Law School, he worked in private practice for several years before serving as chief counsel to Senator Chuck Schumer. In 2009, President Obama named him to lead the most elite and independent federal prosecutor’s office in the country.

Bharara focuses much of his book on his years as US attorney, giving the reader an inside look at the workings of a federal prosecutor’s office. He explores the process of investigating and bringing to justice elected officials, Mafia kingpins, drug-gang leaders, and terrorist-cell members. With a stellar record of successful and high-profile prosecutions, Bharara could have easily focused on his wins. Just as often, though, he draws lessons from the cases and experiences that did not go as well: the interrogations that failed to produce the urgently needed intel; the tough decisions not to prosecute; the cases where his team learned, even years later, that someone had been wrongfully convicted.

What makes Bharara’s storytelling so compelling beyond the trial lawyer’s riveting war stories is how morally invested Bharara is in his profession. When he speaks about justice and truth and integrity, he is not only defending the pillars of the criminal-justice system, he is expressing a personal creed.

One of the book’s most moving passages is Bharara’s recollection of the high-school public-speaking competition that inspired him to go to law school. The speech he chose to deliver was Clarence Darrow’s 1925 summation in defense of Henry Sweet, a Black man who had fired a gun into the white mob attacking his home. He quotes Darrow’s closing: “After all, every human being’s life in this
world is inevitably mixed with every other life and, no matter what laws we pass, no matter what precautions we take, unless the people we meet are kindly and decent and human and liberty-loving, then there is no liberty. Freedom comes from human beings, rather than from laws and institutions.”

Darrow’s words not only propelled Bharara to enter the law, but their meaning clearly stuck with him throughout his career. In his memoir Bharara tells us that “in the end, the law doesn’t do justice. People do.” In such fractured times, when the law often seems devoid of morality, the zeal and passion of Doing Justice is an important reminder that along with being a nation of laws, we are also, for better or worse, a nation of men.