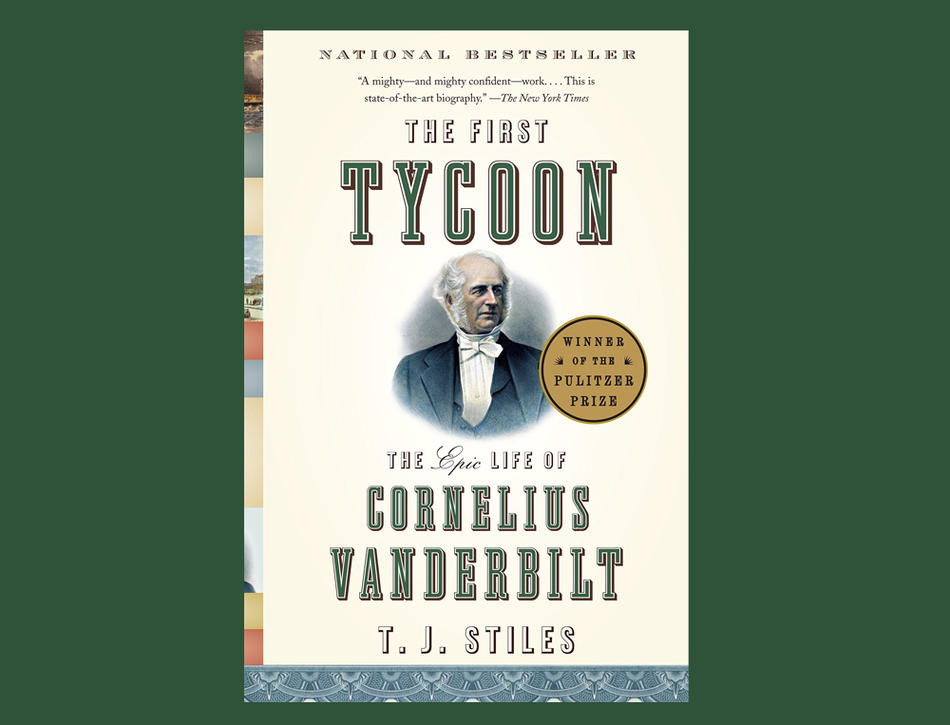 People know four things about Cornelius Vanderbilt: He founded the New York Central Railroad. His nickname, “Commodore,” referred sardonically to his beginnings sailing a one-man Staten Island ferry. He remarked, “The public? The public be damned!” And he inadvertently caused the potato chip to be invented.

Wrong on each count.

Vanderbilt made the New York Central (founded by others) great, but Commodore was the press’s salute to a shipping mogul. He left it to his son William to damn the public, and the irresistible potato chip myth — the crusty Commodore sends back fried potatoes as insufficiently thin and salty, and the equally crusty Saratoga Springs chef says, “I’ll give him thin and salty” — is belied by the fact that the chip got to the restaurant ahead of the Commodore.

These corrections, amid an extraordinary wealth of learning and insight about a great man and his times, can be found in the meticulously researched and brilliantly written The First Tycoon: The Epic Life of Cornelius Vanderbilt by T. J. Stiles ’91GSAS. Over 66 years, Vanderbilt (1794–1877) devoted himself to one business: transportation. He ended as the master of a railroad empire linking the Hudson to Lake Michigan. En route, he sailed, dominated, and forsook New York Harbor, the Hudson, Long Island Sound, the route from New York to San Francisco via Central America, and the North Atlantic.

A creature of the water from the start, he became an amphibian when he linked Boston and New York by water and rail. He did not crawl onto land for good until the end of his seventh decade, when he sold his empire on water to fund his new one on land.

Although Vanderbilt’s reach occasionally exceeded his grasp, both were prodigious. He projected and nearly built the interoceanic canal that the Nicaraguan government pursues today. In 1862, when Washington, D.C., lived in terror of the Confederate ironclad CSS Virginia (aka Merrimack), he pulled his liner Vanderbilt off her run, equipped her to fight, and gave her to the Union government. This kept Virginia bottled up in Norfolk until fleeing Confederates destroyed her.

As the epic began, in 1818, young Vanderbilt attracted the attention of a steam ferry operator on the New Jersey–Manhattan run. Temporarily short a captain, Thomas Gibbons hired Vanderbilt for a few days. He had acquired not merely a temp but a general manager and consigliere. Gibbons needed the last: Steamboat service in New York Harbor was a legal monopoly. Gibbons defied the monopolists, who harassed him with the law. Vanderbilt encouraged Gibbons to attack the monopoly as an unconstitutional infringement of the interstate commerce clause. With Daniel Webster pleading, Gibbons prevailed.

For a time, the new opportunities thus opened lay in New York Harbor, but Vanderbilt gradually moved up the Hudson to Albany. From there, he turned to Long Island Sound and the developing sea-land route between New York and Boston. This led to his fi rst tentative interest in a railroad, a short line connecting the Connecticut port of Stonington with Providence.

A greater destination now beckoned: not Boston, but San Francisco. Americans wanted to go to the new state of California, an El Dorado for farmers, even before the gold strike. There were three routes: overland, by sea around Cape Horn, and by sea-land via Panama. Vanderbilt envisioned a fourth, shorter route by water, with a short canal across Nicaragua. He was finally frustrated by William Walker, the American adventurer who improbably seized control of Nicaragua. In their struggle, Vanderbilt functioned more as sovereign than CEO. He organized and funded a coalition of Nicaragua’s neighbors to drive Walker out, and when Walker imprudently tried to return, he met a firing squad in Honduras.

The inevitable transcontinental railroad, completed in 1869, would soon render the Central American routes obsolete, and Vanderbilt turned to the North Atlantic, where he more than held his own against subsidized shipping rivals, including Cunard. After conquering on water and dabbling in railroads, the Commodore found his final métier on land.

In connecting New York and Chicago, he built little track himself, but had a remarkable eye for track laid by others. He was the Great Consolidator. Our existing rail system, comprising six giant corporations, is simply the logical result of the Commodore’s strategy of consolidation, signally embodied in his 1867 purchase of the New York Central. Even now, Amtrak takes people from New York to Chicago largely by the Vanderbilt route.

Stiles argues persuasively that Vanderbilt found the business model in clay and left it in the marble now surrounding us. He transformed the nature of corporations and of the stock market. Through consolidation, he created the fi rst giant corporation. Stiles correctly notes that this achievement transcended the narrower purposes of the railroad itself.

The Commodore also left a more personal legacy: 13 children. The youngest son, next to last in his class at West Point, went to France to recover his health and died there at the start of the Civil War. The middle son, Cornelius Jeremiah (“Corneil” to the family), an alcoholic gambler and Central Casting wastrel, finally ended the comedy by his own hand. William, the eldest son, for many years impressed his father as a “numskull,” but Billy became the Commodore’s deputy and successor, in 15 years doubling the fortune his father left him. In a legendary 1877 trial, Corneil and some of the sisters unsuccessfully contested the will. The current value of the stake in the trial is not easy to calculate, but when the Commodore died, he controlled 1 in 20 of every dollar in circulation. On a good day, Bill Gates controls 1 in 138.

The Vanderbilts are no longer super-rich. Although Billy was worth $200 million when he died and lived almost modestly (for the richest man in the world), his children were spenders, not earners. To see the fortune the Commodore built, you must visit their palaces in Newport and North Carolina.

The Commodore’s true legacy is even more immense: the economic structure about us. “The imagined devices of commerce gradually abstracted the tangible into mere tokens, and then less than tokens,” writes Stiles. “Money transformed from gold coin to gold-backed banknotes to legal-tender slips of paper and ledger entries of bank accounts . . . Like a ghost, the business enterprise departed the body of the individual proprietor and became a being in itself, a corporation with its own identity, its own character, its own personhood.” No philosopher of business (he was too busy making an economy to be an economist), Vanderbilt leads to this day by example.

Stiles takes his epigraph from Salman Rushdie: “To understand just one life, you have to swallow the world.” Stiles has swallowed — and, more important, digested — the world through which Cornelius Vanderbilt for eight decades so astonishingly strode. This is biography on the epic scale.

Stiles's book won the Pulitzer Prize for biography in Spring 2010.

Top Stories
What Declassified Government Documents Reveal About America’s Dark Secrets
Book Review: Horse
Can the World’s Religions Help Save Us from Ecological Peril?
Drawing Connections with Wendy MacNaughton
Is Objectivity in Journalism Even Possible?
All categories >
Read more from Samuel McCracken