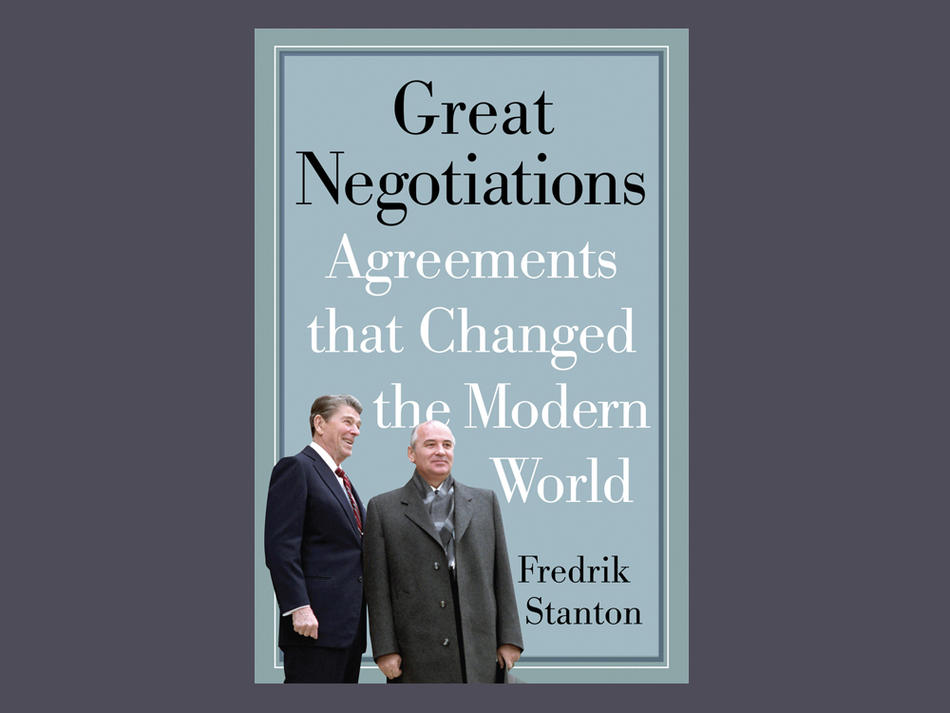 In October 1962 the world came as close as it ever had to nuclear war. An American spy plane had discovered Soviet offensive missile sites under construction in Castro’s Cuba. The Soviet foreign minister and the ambassador to the United States denied the sites’ existence even as construction crews hastened to complete their work. Once President John F. Kennedy revealed to the world the fact of the missiles and demanded their prompt removal, frank exchanges between Kennedy and Soviet premier Nikita Khrushchev to resolve the dispute offered the only hope of averting catastrophe.

The situation was all the more dicey, explains Fredrik Stanton ’96CC in Great Negotiations: Agreements that Changed the Modern World, because the two principals were 5000 miles from each other and had no way of probing each other’s intentions in search of a workable compromise. Compelled to exchange negotiating positions in formal statements through time-consuming telexes — the hotline was set up the following year — Kennedy and Khrushchev both realized that misunderstanding or misinterpretation of the written word could have unthinkable consequences. They therefore resorted to intermediaries who could explore a negotiated solution through face-to-face meetings.

Soviet spy Julius Rosenberg’s old NKVD handler, Alexander Feklisov, who had resurfaced under a pseudonym as the KGB’s Washington station chief, floated trial balloons through the ABC News state department correspondent John Scali. Attorney General Robert Kennedy held top-secret talks with Soviet ambassador Anatoly Dobrynin to hammer out a face-saving deal. A nuclear war was averted with the assistance of these ad hoc, impromptu contacts between third parties, while the two decision makers half a world apart operated in the dark.

In tackling these high-level negotiations, most of which were conducted in utmost secrecy by upper-class white men, Stanton’s book is something of a throwback: history from the top down rather than from the bottom up. Diplomatic history, or the history of international relations as it is sometimes called, has been dismissed by many social and cultural historians as an elitist, state-oriented, male-dominated, old-fashioned form of historical inquiry that focuses on the activities of governments at the expense of the broader and deeper dimensions of human history. Great Negotiations makes the case that we still need to pay attention to the indisputably important role of individual statesmen and -women who negotiate matters of international dispute at critical turning points in history.

Stanton offers a concise, entertaining account of eight such momentous encounters, evocatively portraying the small cast of characters whose diplomatic skills, as he puts it in his subtitle, “changed the modern world.”

Among the most riveting of these involved, again, Soviet and American leaders whose principal topic of discussion was the fate of humanity: the Reagan-Gorbachev summit in Reykjavik, Iceland, in October 1986. In contrast to the long-distance improvisations to prevent a nuclear Armageddon 24 years earlier, the American and Soviet leaders sat across the conference table from each other in a cooperative effort to end the nuclear arms race once and for all. The main theme of Stanton’s account is the extraordinary personal chemistry between the two men, which enabled them to reach the verge of a stunning agreement that would have eliminated all Soviet and American intercontinental ballistic missiles within 10 years. Reagan later recalled that he and Secretary of State George Shultz “couldn’t believe what was happening. We were getting amazing agreements.” Even the old hardliner Paul Nitze, head of the U.S. negotiating team, conceded that, “This is the best Soviet proposal we have received in 25 years.”

There was a hitch, however. In exchange for Soviet concessions, Gorbachev wanted Reagan to scrap his Strategic Defense Initiative (SDI). When Reagan refused to abandon SDI, the agreement collapsed.

But, as Stanton reminds us, the last-minute failure of this bold bid to remove the Sword of Damocles that had hung above the world since the beginning of the Cold War paved the way for two significant arms-control agreements: the Intermediate Nuclear Forces Treaty (1987), which eliminated all intermediate-range nuclear weapons from the European theater, and the first version of the Strategic Arms Reduction Treaty (1991), which radically reduced the strategic nuclear arsenals of the United States and the Soviet Union.

France also figures prominently in Great Negotiations. Three of Stanton’s eight case studies involve Franco-American diplomatic exchanges: Benjamin Franklin and Silas Deane’s successful negotiation with the Bourbon monarchy that produced the Franco-American Treaty of Alliance (1778); Thomas Jefferson’s purchase of the Louisiana Territory from Napoleon I (1803); and Woodrow Wilson’s wrangling with Premier Georges Clemenceau of the Third French Republic over the drafting of the peace treaty with defeated Germany at the Paris Peace Conference (1919).

Stanton is right to assert that each of the agreements reached in these three negotiations had important long-term repercussions. The shrewd combination of inducements and threats that enabled Franklin and Deane in Paris to secure the Franco-American Treaty of Alliance on February 6, 1778, for example, provided the Continental army with weapons, ammunition, and supplies, as well as naval and military support at a critical stage of the war. Stanton reminds us that while France proceeded to deal its global rival a serious blow by depriving it of its American colonies, the costs of the war — three times France’s national budget — eventually forced the hapless Louis XVI to seek approval for new taxes from the long-defunct Estates-General, which in turn led to the overthrow of the monarchy and the advent of the French republican tradition.

No less consequential was the Paris Peace Conference of 1919: Stanton paints a vivid portrait of this gathering of the victors of World War I to redraw the map of Europe and forge a new world order. But Stanton’s excessive attention to trivial details — the chandelier hanging on the ceiling, the tapestries on the walls — crowds out many of the substantive issues with which the delegates grappled, such as concerns about borders, security, German disarmament, and reparations. When he does turn his attention to these issues, Stanton hews closely to the orthodox historical interpretation of the Versailles settlement offered by John Maynard Keynes, Harold Nicolson, and other disillusioned participants: the sordid story of a vindictive France imposing on defeated Germany a “Carthaginian peace” in violation of lofty Wilsonian ideals. Stanton’s assertion that “Clemenceau was quite open about his desire to dismember Germany, and candidly admitted that the more separate and independent republics that were established in Germany the better” is a crude caricature of the French premier’s nuanced diplomacy at the peace conference. The old Tiger was reviled by French president Raymond Poincaré, Generalissimo Ferdinand Foch, and the right-wing Parisian press for his unwillingness to smash Germany into its pre-Bismarckian pieces and make it pay the full cost of France’s war effort. Stanton quotes liberally from Margaret Macmillan’s Paris 1919: Six Months That Changed the World, but seems to have missed the underlying theme of that book (and of much recent scholarship on the subject): The peace settlement of 1919 was not nearly as harsh or as impossible of fulfillment as its early critics claimed.

All of the negotiating sessions featured in this book have been subjected to exhaustive investigation by several eminent specialists. Stanton neither uncovers new historical facts nor offers novel interpretive insights about his eight case studies of diplomacy. But his lucid, cogent assessments of the daily give-and-take and lively character sketches of the dramatis personae make this book a pleasure to read.