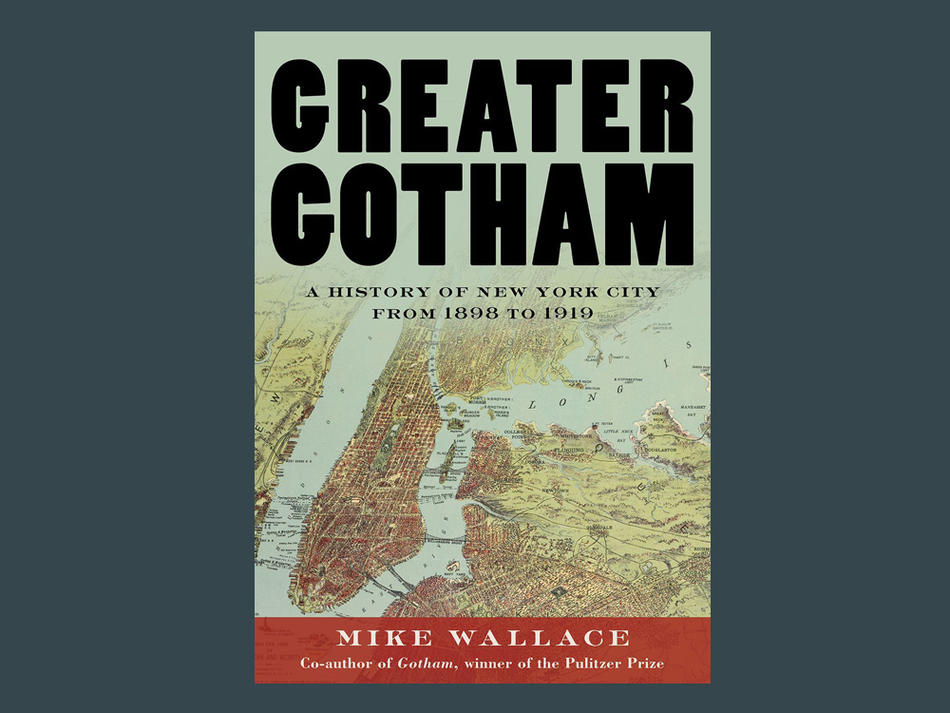 From a distance, Greater Gotham looks like a formidable book. But just as the Empire State Building looms less the closer you get, Mike Wallace’s monumental history of New York City feels compact and almost fleet once you flip past the table of contents. It picks up in 1898, where Gotham, by Wallace ’64CC, ’73GSAS and Edwin G. Burrows ’66SIPA, ’74GSAS, left off, and covers just twenty-one outsized years in 1,100 pages. This cornucopia opens with the consolidation of New York and Brooklyn, which Wallace sees as the embodiment of monopoly capitalism in its yeasty heyday. Big corporations fed themselves on smaller ones, and a handful of the city’s elite club members divided the nation’s material wealth among themselves. The Havemeyer family presided over an empire of sugar, Carnegie controlled steel, the Rockefellers owned oil, and all of them shared the certainty that what was best for them was best for New York.

Superlatives toll through Greater Gotham, each one seemingly the product of a day’s burrowing in the archives. New York, Wallace writes in one of his catalogs (the exuberant italics are his), “had the planet’s tallest skyscraper, its biggest office building, and its largest department store, hotel, corporate employer, bankers club, steamship fleet, electrical-generating plant, bakery, ballroom, library stacks...” The list goes on. (“Also the longest bar, the richest man, and the first auto highway.”)

Wallace writes not for his PhD-wielding peers, but for anyone with an interest in the past. Yes, he occasionally waxes a little overly generous with detail — if you’re in the market for a punchy paragraph about the rope-making monopoly, Wallace is your man — but he also dispenses wry asides and telling anecdotes with the gusto of a fireside raconteur. We meet the anthropologist Franz Boas as a young assistant at the American Museum of Natural History, when he suggests that the explorer Robert Peary bring back an actual Inuit person to help annotate a shipload of artifacts. “He hadn’t, however, planned on three men, one woman, and a girl and boy (the latter, Minik, being the 8-year-old son of Qisuk, one of the men),” Wallace remarks. The incongruity of an Eskimo family turning up on Central Park West at the height of the Gilded Age seems momentarily comical — until we learn that the stranded Inuit were housed in the museum’s basement, where they contracted tuberculosis and died — all, that is, except for the orphaned Minik.

Wallace erects a scaffolding of facts and insight that he builds into a full-fledged saga. Technology, immigration, and economic ferment created both a female workforce and a fresh set of professions. “New positions were associated with new technologies, ones that hadn’t yet been sex-typed,” he writes. The gender-neutrality of machines didn’t last long, though: “Secretaries were called ‘Miss Remingtons’ after the typewriters they used — helping to lock in the job category as female.” What followed was a social and legal war over sexual mores, women’s rights, and gender equality — a conflict that culminated in the Nineteenth Amendment and, a century later, still rages on. Wallace stays silent on his story’s contemporary resonances, but readers will have no trouble picking them up. Race, corruption, capitalism’s beneficence and depredations, the skyline rising out of control, nativist fury over immigration, the disorienting power of technology — virtually every topic he treats buzzes daily through my Facebook feed and yours. I find those connections between past and present alternately depressing and invigorating. To sit in a subway car stalled by rusting signals and read about the system’s explosive construction more than a hundred years ago is to inhale gratitude and exhale resentment. They bequeathed us such fine transit! How could we let it rot?

Brushstroke by brushstroke, fact by fact, Wallace builds up a portrait of a city full of vitality and injustice, civic narcissism and collective aspiration, a noisy, crowded metropolis that is constantly being raised and ruined at the same time. It’s a New York that is both unimaginably different and comfortingly similar to the one I walk through every day.

Top Stories
The Simple Questions That Can Prevent a Suicide
Book Review: Horse
Lets Talk About Sex on YouTube
New Smart Helmet Could Spot Concussions in Real Time
How the Mankiewicz Family Got Their Hollywood Ending
All categories >
Read more from Justin Davidson '90GSAS, '94SOA