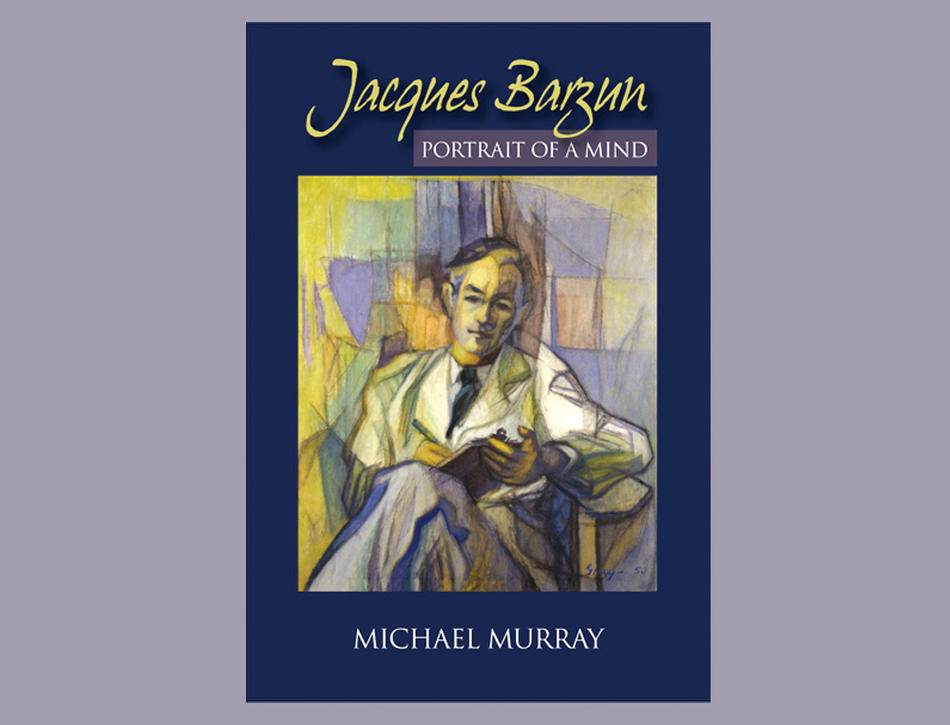 Stephen Vincent Benét famously wrote that Robert E. Lee kept his heart safe “from all the picklocks of biographers.” The same could be said of Jacques Barzun. As Barzun approached his 100th birthday in 2007, his friend and student Arthur Krystal ’70GSAS recalled trying to draw him out about his life. Barzun replied with a sigh, “It’s not a subject I’m interested in.”

Today, residing in San Antonio as he nears 104, Barzun remains reticent about himself. Necessarily, then, in Jacques Barzun: Portrait of a Mind, Michael Murray forsakes conventional biography for a more intellectual overview. Barzun ’27CC, ’32GSAS — author, editor, and translator of more than 40 weighty books; conversant with baseball, the prose of Abraham Lincoln, and the grotesqueries of racial theory — is for many also the last word on William James and Hector Berlioz. Columbia rightly celebrates him as a primary architect of Literature Humanities and the Colloquium in Important Books, the successor to the famed General Honors course created by John Erskine 1900CC, 1903GSAS. During World War II, the U.S. Navy even commissioned Barzun to write an official history of significant seafaring events.

The son of a poet and diplomat, by age three the young Jacques Barzun was already attending orchestra concerts, and, writes Murray, “his mother could not keep him from lecturing fellow passengers on streetcars, or her guests who came to call.” He witnessed and participated in the salon that his parents established at their home in Créteil, outside Paris, where in the years before World War I, Apollinaire, Duchamp, Pound, and Zweig regularly held court. At Columbia he learned from Mark Van Doren ’21GSAS, Franz Boas, Mortimer Adler ’23CC, ’29GSAS, and Harrison Steeves 1903CC, 1913GSAS.

No figure was more important to him than Carlton J. H. Hayes 1904CC, 1909GSAS, who taught Barzun to glean from history, as he put it, “what was culturally diagnostic.” Inspired by Hayes, Barzun largely created the field of cultural history, which Murray describes as “an all-inclusive synthesis: not only kings, battles, laws, and statistics, but also habits, beliefs, influences, and tendencies, in art and literature, manners, morals, science, and religion, and the social setting in which these were found.”

That broad approach animated Barzun during the 48 years he taught on Morningside and the 36 years that have followed. Reading Murray’s account, it is hard not to be dazzled by a man who, during a four-week period in 1953, read and reviewed André Malraux’s Voices of Silence and The Letters of Franz Liszt, edited the galley proofs of his book God’s Country and Mine, adapted them into articles for the Atlantic Monthly and Vogue, gave speeches on campus and at a Partisan Review banquet, reworked four lectures for publication, and offered a broadcast on WNYC. All this, mind you, apart from his teaching and dissertation duties.

Murray also devotes whole chapters to such Barzunian fascinations as the translator’s craft and the writing of Barzun’s masterwork, From Dawn to Decadence: 500 Years of Western Cultural Life, 1500 to the Present, published when the University Professor Emeritus was 92. An especially rewarding chapter is given over to Barzun’s teaching of the Colloquium with Lionel Trilling ’25CC, ’38GSAS. Contemplating his pairing in 1934 with a confirmed Marxist and Freudian, Barzun initially wondered, “O Lord! What is this going to be like?” But for decades, the brooding Trilling and the energetic Barzun meshed wonderfully, both in and out of class.

Columbia aficionados will also enjoy reading about Barzun’s tenure as provost and dean of faculties from 1957 to 1967. His determination to keep plodding graduate students on track for their PhDs is still relevant. For those who continue to dissect the turf wars between Low Library and Hamilton Hall, Barzun’s genteel attempts to centralize authority and reconcile factions will ring true. On a more idiosyncratic note, Barzun recalled that as an administrator, “I requested Buildings and Grounds to see to it that all directive signs on campus should begin with the word please — keep off the grass, use the other door, do not smoke in elevators.”

These glimpses into Barzun the man help leaven the rarefied tone of the book. We learn that the carnage of World War I left the sensitive, prepubescent Jacques feeling downright suicidal; that the first of his three marriages, to the actress, dancer, and Barnard alumna Lucretia Mueller, failed because she was not his intellectual equal; and that the great man himself was happy to change his children’s diapers. There is much humor, too. At one point, Barzun writes in his copy of a psychological study of Ruskin, “This is a mad book and I mean to shoot it.”

Murray, a library scholar at Ohio State University and a noted organist, previously edited the fine omnibus volume A Jacques Barzun Reader. Here, though, he has a few problems with the biographer’s art. Regal though Barzun may be in his manner, he has long advocated simple and direct prose. It is thus distressing to read passages that are windy (“These may conduce to intuitive glimpses of transcendent reality”), passive (“Certainly the theoretical was favored over the practical”), or awkward (“Not serious intellection alone marked the years Barzun spent as a graduate student and lecturer”). So beholden is Murray to his friend of 35 years that an air of idolatry seeps through. Too often, he describes Barzun’s long-ago thoughts in the present tense, as if he were somehow omniscient, an impression that Barzun did not always discourage.

Rarely does Murray question Barzun’s authority. Yes, in a chapter that culminates with the publication of Berlioz and the Romantic Century, Murray ticks off some critics’ attacks on the work: “Berlioz did not merit two thick volumes. The book was mere special pleading. . . . The musical analyses filled too few of the nine hundred pages. The author’s judgments lacked musicological authority.” But there is little of this kind of second-guessing. In general, Murray might have heeded Barzun’s own gentle rejoinder to an admirer: “I recommend that you try to balance views and tendencies by looking for other opinions on the same subject. . . . Discipleship is dangerous!”