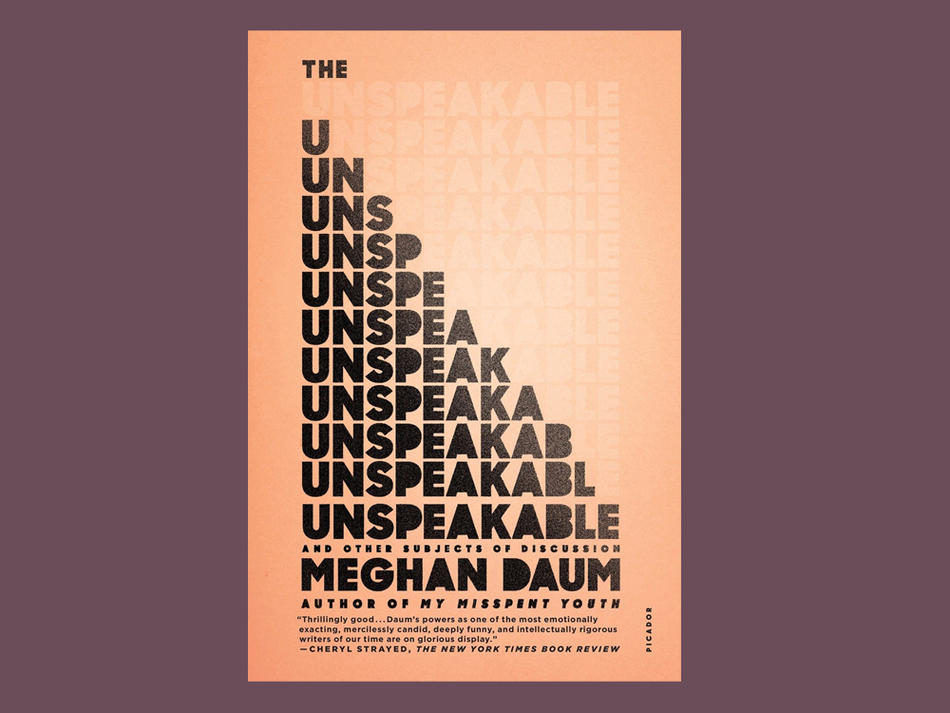 It would be a stretch to say that Meghan Daum ’96SOA was the whole reason I went to Columbia, but I did enter the MFA program with the express desire to be turned into a writer as near in style, brio, and, yes, success, to Daum as possible. And it is also fair to say I wasn’t the only one there with that ambition.

Daum’s writing is so elegant, intimate, and ticklishly satisfying that you want to claim her as your own. Discovering a shared affinity for her work can create an instant bond with a stranger; you can also feel a jealous resentment when a reader you deem not quite up to snuff claims to love her as well.

It is fitting, then, that the most effective essays in Daum’s new collection, The Unspeakable, are about those possessive, infatuated, largely theoretical relationships a woman can have with an alluring other woman — what Daum terms “the mystery girl.” She may be your age, but she is probably older; she may be plain, but she is probably esoterically beautiful; you may know her, but she is probably a stranger; and, most importantly, she does the thing you most want to do in exactly the way you most wish you could do it. Daum’s mystery girls include Joni Mitchell, Nora Ephron, Joan Didion (about whom she has written elsewhere), and, for a while, a coven of lesbians she hung out with while she was in the Columbia MFA program.

The collection opens with a breath-stealing, gut-kickingly candid essay about the death of Daum’s mother, described here as a performative narcissist unable to cede the spotlight to her daughter. The piece, which is tender, fierce, rueful, and even funny about the loss of an unloved parent, a topic it seems impossible to even think about without lapsing into sentimentality or childish rage, introduces the theme of the search for a more appropriate surrogate maternal figure. The most resonant subsequent essays describe Daum’s relationships with other women: the way they, like all mothers and mother surrogates, enchant and disappoint her, the way they seem to promise “a life in which there was time for a hundred different versions of myself.” The sorrow that accompanies the realization that there is only one version of yourself, and you are not Joan Didion or Nora Ephron or even, in the reader’s case, Meghan Daum, is a subtle, bittersweet undercurrent throughout the book.

After publishing her first book of personal essays, My Misspent Youth, in 2001, Daum wrote a novel, The Quality of Life Report, which was optioned for a film; to write the screenplay she moved to Los Angeles, where she lives now and works as a columnist for the Los Angeles Times. The film was never made, but because of Daum’s elbow-brushing relationship with Hollywood and the entertainment industry, she has gotten to meet some of her mystery girls in the flesh. “I realize the clause ‘Joni and me’ has been written upwards of 10 million times, mostly in diaries with flowers drawn in the margins and in sonnets written in galloping pink cursive,” she acknowledges in “The Joni Mitchell Problem.” But how many of those fangirls get to have dinner with the songwriter, who is forty-five minutes late, chain-smokes throughout, talks about a multinational conspiracy to disrupt the energy fields of humans and the sonar of marine mammals, and compares herself to St. Augustine and Mozart? Perhaps not surprisingly, though still smitten with Mitchell at the end of the evening, Daum manages to lose the notebook containing Mitchell’s phone number and address, and her notes from the interview.

For some, like Daum, after Joni came Nora. As Daum writes in “Invisible City,” “When [Nora Ephron] died unexpectedly in 2012, we all seemed to come out of the woodwork like mistresses at the funeral of a raging yet irresistible philanderer, churning out paeans to her in any publication that would let us and sizing one another up as if saying, ‘She took you to lunch, too?’” She’s not quite as daffy as Mitchell, though Ephron, while a willing and eager mentor, proves herself slightly removed from reality as lived by the non-famous, inviting the writer to a game of “running charades” at her house, where the guests include Nicole Kidman, Meg Ryan, and Steve Martin, none of whom want anything to do with a nonentity like Daum. After insisting that Daum can, with one phone call, set herself up with a When Harry Met Sally-sized career, Ephron concludes that her protégée is actually a columnist, not a screenwriter.

Daum is too gracious to come right out and say that Mitchell was a kook and Ephron was a flake, but it’s hard not to feel disappointed on her behalf. Even in early middle age (Daum is forty-four), you’re not too old to want a more perfect mother figure — someone who will champion your gifts, teach you how to be a person and a writer. In the essay “Difference Maker,” Daum comes to terms with her decision not to have children, writing, “for every way I could imagine being a good mother . . . I could imagine ten ways that I’d botch the job irredeemably.” The book, then, functions as a sort of older-but-wiser examination of the ways the roles of both daughter and mother can fail to fulfill our desire to live “a hundred different versions” of our lives. Daum may never find the surrogate mother figure who will transform her life, but for many of us, she remains the ideal mystery girl.