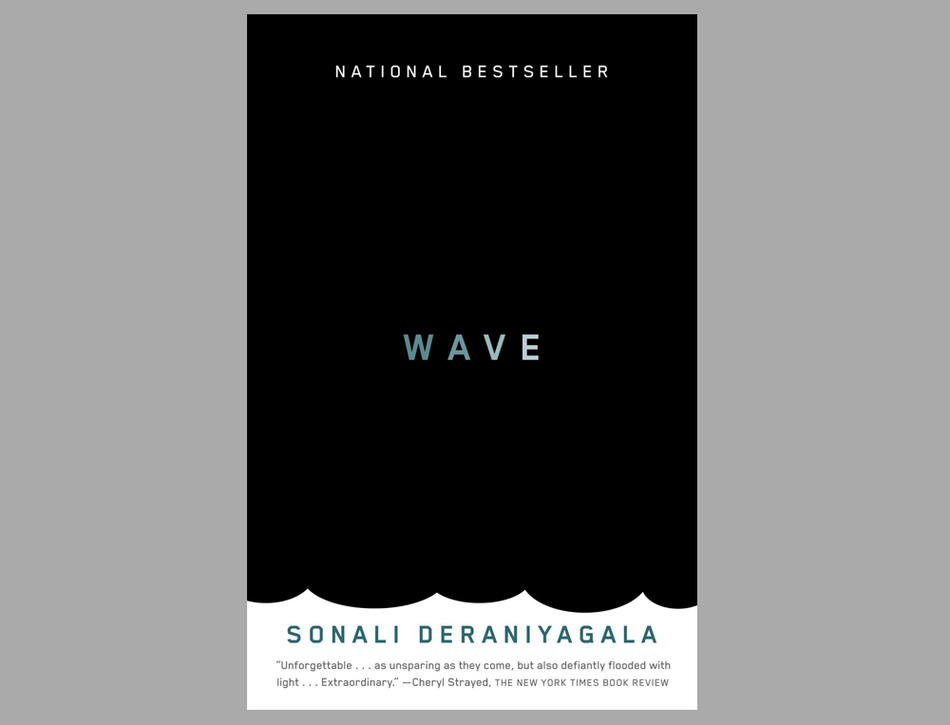 In July 2005, I met a seven-year-old boy in a small coastal town in northeast Sri Lanka. He told me that he had lost his entire family in the 2004 Boxing Day tsunami, which claimed more than 35,000 lives in Sri Lanka and nearly 230,000 lives altogether. He pointed to a fading but sizable scar on his forearm. The tsunami’s powerful waves had thrown him and his mother up into the branches of a coconut tree outside their home. To save him from falling into the waves, his mother bit into his arm and hoisted him higher into the tree’s branches. Taking my hand, he placed my fingers on the scar’s uneven surface so that I could feel where his mother’s teeth had been. He told me that he hopes the scar will never fade.

In The Body in Pain, Elaine Scarry writes, “Physical pain has no voice, but when it at last finds a voice, it begins to tell a story ... for what is quite literally at stake in the body in pain is the making and unmaking of the world.” Scarry’s observation resonates with Wave, a memoir by Sonali Deraniyagala. A SIPA adjunct professor who came to Columbia to research post-disaster economic recovery, Deraniyagala writes about grief rather than physical pain, though in such a visceral way that the two seem nearly interchangeable.

When the tsunami hits Sri Lanka’s shores, Deraniyagala is vacationing with her husband, Stephen Lissenburgh; their two sons, Vikram and Malli, ages seven and five; and her mother and father. They are in Yala, a national wildlife park on the southern coast, and plan to return to her parents’ home in Colombo later that morning. A few days after, they will continue home to London. As her friend comments just moments before they see the wave, “What you guys have is a dream.”

The opening pages draw us into this dream unraveling at high speed. As the wave approaches, Deraniyagala, her husband, and the boys flee their hotel and climb into a jeep in the hotel driveway. There is no time to warn Deraniyagala’s mother and father, and the jeep speeds away, leaving them behind.

As the wave surrounds them, water fills the jeep. Deraniyagala and her husband lift their sons to the ceiling so that they can breathe. The tires lift off the ground, and the jeep begins to float. At that moment, Deraniyagala recalls the look on her husband’s face: “I’d never seen him like that before. A sudden look of terror, eyes wide open, mouth agape. He saw something behind me that I couldn’t see.” The wave rushes toward them, and the jeep overturns.

It is not clear exactly what happens to her family next — Deraniyagala herself will never know — but with the overturning of the jeep, she loses her husband and sons, and, as with her mother and father, never sees them alive again. Like the young boy I met, Deraniyagala survives by holding on to a branch. “Why didn’t I die?” she asks. “Why did I cling to that branch?”

Deraniyagala spends the next eight years “making and unmaking” her world. Her recollections of the first six months are intensely raw with grief and pain. As the bodies of her family members are slowly identified and recovered, she meticulously plots her suicide. “I’ll wait until all the bodies are found,” she writes. “Then I will kill myself.”

She doesn’t kill herself, but she also does not heal. Her body is merely tolerating its own existence, stretching the limits of survival beyond what we think is possible. She consumes cocktails of pills and booze, reveling in hallucinations and disaster pornography on the Internet. She harasses the Dutch family that has moved into her parents’ emptied home. She fears sleep because she must “wake up the next morning and relearn the truth all over again.”

Witnessing Deraniyagala’s intense contempt for life, we learn that her grief’s pain does not fade like the scars on our skin. Rather, it surfaces in objects, once mundane but now “pulsing” with unrelenting life force of what once was but can never again be. Vikram and Malli’s soft school bags become “scalpels.” An unexceptional, mud-encrusted doormat in her parents’ home becomes a living artifact of the happiness they all shared when their family was intact. In one of the most poignant vignettes, Deraniyagala revisits the hotel rubble in Yala for the first time and finds the back cover of her husband’s 2003 research report flapping in the sand. She clutches it to her chest and sobs. “Starved of their loveliness,” she writes, “I feel shrunken.”

Deraniyagala continually forces herself to remember, and transforms that collection of memories into an intimate testimony to the beauty that Stephen, Vikram, Malli, and her parents brought to her life. But it is also these very memories that challenge the wholeness she can feel as a mother, wife, and daughter without them. Maintaining this “equilibrium,” she admits, is a daunting endeavor. “I lurch into what I am missing,” she writes, and in doing so, she dares to become intimate with her family’s ever-expanding absence.

Years after the disaster, Deraniyagala still struggles to maintain this balance, to remember that she is still the same person she was. Sitting alone in a New York garden, she hears her husband and sons laughing in a heap beside her. They are laughing about Malli’s new family name for Deraniyagala, “Mummy Lissenburgh.” Her husband and boys died thinking of this as her name: “Me having no identity without these three boys to whom I was merely tagged on,” she writes, which provides her with some solace. As long as she has that memory, her identity as a wife and mother will never fade.

Often fearful that others will find her pain “not palatable,” Deraniyagala writes, “I am not one for telling.” But her memoir convinces us that her grief is the fiercest incarnation of the love that they shared. We will never be able to consume the full experience of her loss, but she provides us with a transformative account of the love that nourishes her pain and ultimately perhaps even keeps her alive.