Some people took up jigsaw puzzles during the pandemic, others redecorated their homes. John Davisson ’08CC, an attorney in Washington, DC, turned to Legos. “I’m a lifelong fan,” says Davisson, who started experimenting with designing his own custom models in 2020. “It’s a great creative outlet when you’re stuck at home.” The former editor in chief of the Columbia Spectator chose to recreate a building close to his heart: Butler Library, where he spent countless hours as a history major (“often procrastinating, sometimes studying”). While Davisson has also constructed models of several DC landmarks, including the Basilica of the National Shrine of the Immaculate Conception and the National Museum of African American History and Culture, Butler was an obvious choice for his foray into miniatures, he says. “It’s a really incredible building, inside and out.”

For icebreakers, gatherings, or family nights in 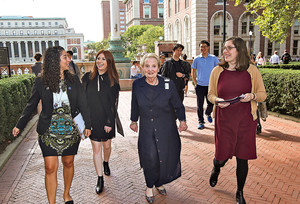 In her final years, the former US secretary of state was a campus mainstay