David Madigan, a Columbia statistics professor who chaired his department for the past five years, has been named the University’s new executive vice president and dean of the Faculty of Arts and Sciences.

In this position, Madigan helps to oversee the operation of five schools: Columbia College, the School of General Studies, the School of the Arts, the School of Continuing Education, and the Graduate School of Arts and Sciences. More specifically, his office coordinates the management of the twenty-nine Arts and Sciences departments whose faculty serve these schools. Deciding how large these departments should be relative to one another, for instance, and what strengths they should develop as they grow, requires an organizational structure that spans the schools, since all of them are affected. This is where Madigan’s office comes in.

“I want to help all of our Arts and Sciences departments hire the best professors and recruit the best students,” he says. “And when these people have amazing ideas, I want to make sure they have the resources they need to do amazing things. I want to provide fertile ground for flowers to grow.”

Madigan succeeds Nicholas Dirks, who left Columbia in July to become chancellor of the University of California, Berkeley. Madigan’s appointment was announced in September, after he had served in the position on an interim basis for several months.

A native of Athlone, Ireland, Madigan received his bachelor’s degree in mathematics and his PhD in statistics from Trinity College, Dublin. After working as an information- technology consultant in Ireland for a few years, he joined the University of Washington as a statistics professor in 1990, remaining there for a decade before moving to Rutgers. At Rutgers, he served as dean of physical and mathematical sciences. He was recruited to Columbia in 2007, taking over as the statistics department chair the next year.

While distinguishing himself as an administrator, Madigan has also built a reputation as a versatile and innovative researcher. In the past few years, Madigan and collaborators have developed algorithms that help doctors make predictions about how prescribed drugs are likely to affect certain people, based on how the drugs have affected others with similar health profiles. Today he is working with Columbia historian Matthew Connelly to analyze large numbers of US government documents to understand official secrecy patterns.

“For me, statistics has always been about collaborating with people to tackle real-world problems,” he says. “I have little interest in working alone.”

Among his objectives as executive vice president, Madigan says, are to increase the diversity of Arts and Sciences faculty, to support teachers in their use of new classroom technologies, and to encourage the involvement of faculty and students in University-wide research endeavors. These endeavors include those housed at the Institute for Data Sciences and Engineering, where expert number crunchers are culling enormous data sets for the benefit of colleagues in urban planning, journalism, health analytics, financial analytics, and cybersecurity; and the Mortimer B. Zuckerman Mind Brain Behavior Institute, where neuroscientists are collaborating with researchers in many other fields to study how brain mechanisms underlie high-level functions such as memory, self-awareness, language, and emotion.

“A lot of the biggest, most interesting research questions today require interdisciplinary teams to solve,” says Madigan. “Consider the mystery of how the brain works. Neuroscientists can’t address that by themselves. They need input from physicists, engineers, statisticians, biologists, computer scientists, psychologists, chemists, and many others. This presents exciting new opportunities. And it means that we can’t have any barriers to the free-flowing exchange of ideas across academic units.”

“In his important new leadership role, David will be called on to sustain and further strengthen Columbia’s academic excellence, expand our interdisciplinary programs, and make this core academic community of Arts and Sciences even more diverse,” says President Lee C. Bollinger. “Having seen his effectiveness in recent months working on an interim basis, I am confident he will succeed on each front.” 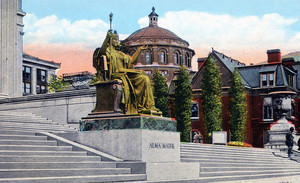 Since the late nineteenth century, charming images of Columbia have appeared on countless postcards