As a Columbia undergrad, Reginald Cash ’04CC was known for hosting some of the best parties around. “I had a side hustle where I would rent venues off campus and throw lots of events,” says the former economics major. “It was one of the most thrilling things about my college years — being around classmates and seeing people connecting, having an awesome time and building community.”

He thought he might become an event promoter after graduating but instead got “swept onto Wall Street” and worked for more than a decade in finance. “Although I was successful, there was a piece that was always missing,” says Cash, who wanted to go back to creating more direct and meaningful experiences for others.

Today, Cash is combining his business and entertaining expertise as the leader of 3BlackDot, a media and entertainment company based in Los Angeles. In early 2022, when the company’s owners were in talks to sell the enterprise, valued at $87 million, to a private-equity firm, Cash, who joined the company in 2017 and became CEO the following year, decided to buy 3BlackDot himself. He is now one of the few Black owners of a major media company. “I thought if I could sit in the seat of the ultimate shareholder, I could ensure we would do the right things for the right reasons,” he explains.

Founded in 2013, 3BlackDot collaborates with creators of high-traffic video-game content on YouTube and other social-media platforms — typically, people who publish videos of themselves gaming — to earn revenue through advertising and brand partnerships. It’s an area that’s rich with potential. “Six of the ten most-viewed channels on YouTube are from gamers,” says Cash, who spent many hours playing Halo in Columbia dorms. “For a lot of Gen-Zers and millennials, gaming is a cultural phenomenon that can influence how they think about music, fashion, travel, career, and other areas. We like to explore how it holds together communities.”

Since Cash became CEO, the company has expanded into media production. 3BlackDot produced the 2019 feature film Queen & Slim and has created popular Web series, including Alpha Betas, an animated fantasy show, and the PepsiCo-sponsored Gaming While Black, which features conversations with Black gamers. Currently, Cash and his team are producing a slate of horror movies with rapper Curtis “50 Cent” Jackson and filmmaker Eli Roth.

In every project, 3BlackDot strives to work with creatives from diverse backgrounds. “There’s a real misconception that because everyone has the ability to publish a video to YouTube or TikTok, the best content wins and the process of discovery is egalitarian,” explains Cash. “But there’s a huge gap in the number of Black content creators who are able to make a living independently, in the number of brands doing sponsorships with them, and in how platforms cater to different perspectives. We’re trying to close those gaps. We believe that if you give value to people’s voices and ideas, it allows them to dream a little bit bigger and feel like they deserve and can achieve more.”

This article appears in the Winter 2022-23 print edition of Columbia Magazine with the title "The Entertainer."

Top Stories
What Declassified Government Documents Reveal About America’s Dark Secrets
Book Review: Horse
Can the World’s Religions Help Save Us from Ecological Peril?
Drawing Connections with Wendy MacNaughton
Is Objectivity in Journalism Even Possible?
All categories >
Read more from Julia Joy 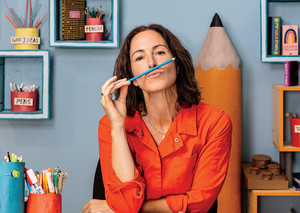 How the illustrator, graphic journalist, and social worker brings people together through art