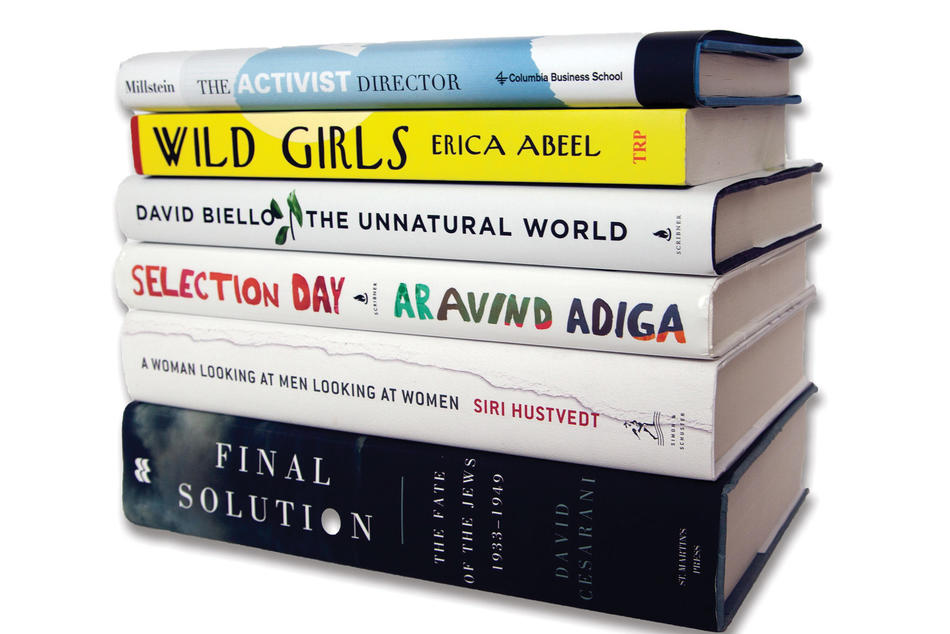 For brothers Manju and Radha, there’s only one path out of a Mumbai slum: becoming the best and second-best cricket players in India. Or at least that’s what their obsessive, tyrannical father wants them to believe. Their future will be determined on Selection Day, when judges pick the city’s next cricket stars; but Manju has other hopes and dreams. This is Adiga’s fourth book and the best since his debut, The White Tiger, which won the Man Booker Prize.

In her latest collection of essays, Hustvedt calls herself “a perpetual outsider who looks in on several disciplines.” Here, those disciplines are, loosely, art and perception, gender and sex, and memory and psychology. The first section considers the works of specific artists (Picasso, Mapplethorpe, et al.), while the second and third sections deal with more metaphysical questions (what is a person? a self?).

Biello, an environmental journalist and the host of the PBS documentary series Beyond the Light Switch, argues that we already have the money and technology to make profound environmental change; what we need is large-scale motivation. With a defiantly hopeful tone, he profiles some of the most effective change-makers, from a scientist looking to fertilize the oceans to a bureaucrat in China working tirelessly to clean up his city.

When Julia, Audrey, and Brett meet at the liberal Foxleigh College in the 1950s, they want to avoid the fate of many of their classmates — marrying well and having babies. Instead, they forge their own paths, through the art and literary scenes of New York and Paris. It’s a fun and empowering read, especially for fans of Beat culture.

When legendary British historian and Holocaust expert David Cesarani died in 2015, he left two finished manuscripts to be published posthumously: a biography of Benjamin Disraeli and Final Solution, a controversial look at the fate of European Jews between 1933 and 1949.  Using decades of research, as well as newly available Soviet archives, Cesarani argues that persecution of the Jews was not inevitable. Rather, it unfolded incrementally and largely at the local level. Cesarani’s analysis is insightful and harrowing — a fitting end to a storied career.

Attorney Ira Millstein — also an adjunct professor at Columbia’s law and business schools — has spent the last fifty years advising companies, nonprofits, and governments on how to best run their organizations. His bottom line? That the biggest corporate meltdowns are caused by passive boards who favor short-term prosperity over long-term growth. He takes readers through disasters like the Con Ed blackout of 1977 and successes like the GM turnaround of the 1990s to offer concrete advice on boardroom best practices.