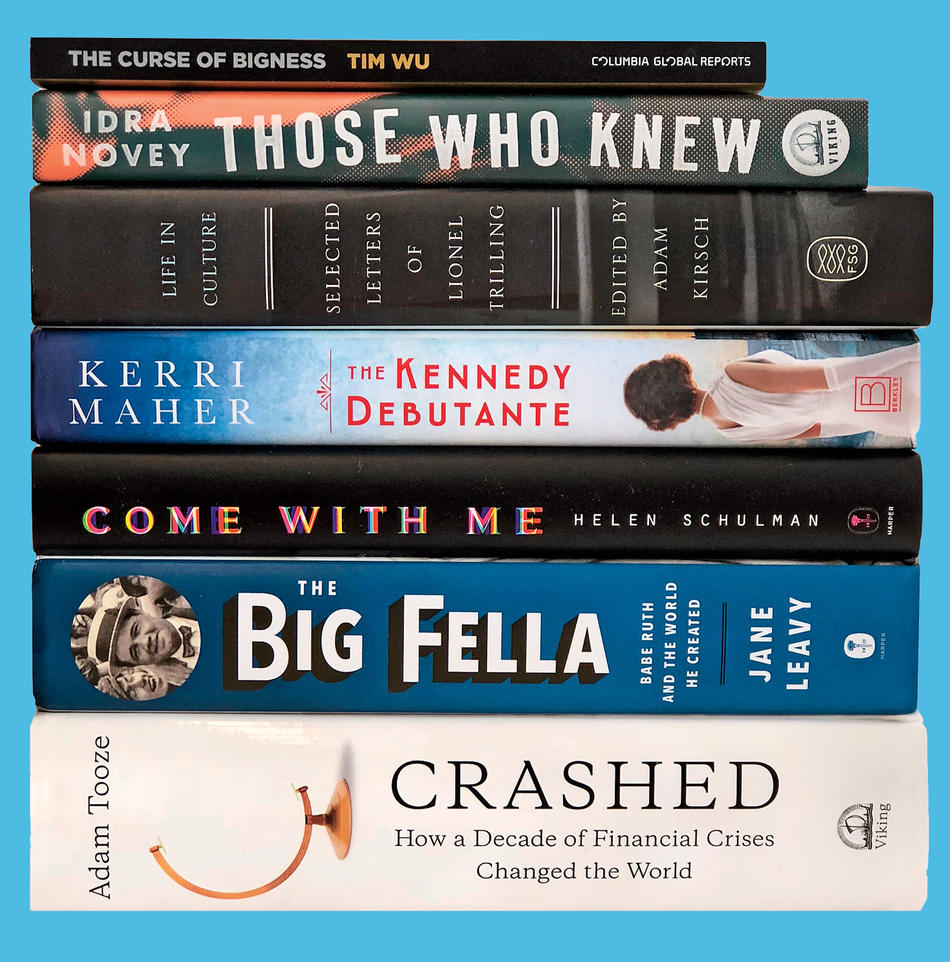 Ten years after the economic crash of 2008, Columbia historian Adam Tooze reexamines the complex factors that led to the crisis and the ways that the ensuing period of recovery has shaped the economy and governance not just of America but of the world. Comprehensive and impeccably researched, the book makes a compelling case for how the Wall Street debacle has influenced most major world events — from Ukraine’s destabilization to Brexit and the rise of Trump. Along the way, Tooze asks two important questions: Was the crisis inevitable? And is it over?

The epigraph of Idra Novey’s second novel reads like a haunting haiku: “In the aging port city / of an island nation / near the start of the new millennium.” It’s fitting for Novey, who has spent most of her career as a poet. But with this electric, deeply feminist story, she proves herself equally adept at fiction. In Those Who Knew, a woman named Lena suspects that a powerful man is responsible for a terrible crime. Lena also has personal experience with the man, and knows that speaking out could come with dire consequences — a timely parable for the #MeToo era.

From 1979 to 1988 — a time when women sportswriters were almost unheard of — Jane Leavy covered tennis, baseball, and the Olympics for the Washington Post. Since then, she’s written best-selling biographies of Mickey Mantle and Sandy Koufax; now she turns her attention to another legend: Babe Ruth. Though Ruth looms large (literally and figuratively) in the American imagination, almost nothing was known until now about his childhood, or about his fascinating relationship with sports agent Christy Walsh. Leavy draws on more than 250 interviews, as well as a trove of previously unreleased documents, to create this warm portrait of an American icon.

Life is full of countless decisions, big and small, and at some point most of us wonder what would have happened if we had made different choices. Helen Schulman’s mind-bending new novel, a look at the terrifying potential of technology in the spirit of Black Mirror, makes this thought experiment real. Schulman, the author of the New York Times bestseller This Beautiful Life, follows Amy Reed, the newly minted PR chief at a Silicon Valley startup that allows people to explore their “multitudes” — the planes on which all their alternative life choices play out simultaneously.

The Curse of Bigness

Columbia Law School professor Tim Wu is known for coining the term “net neutrality,” referring to the idea that data should be treated equally by Internet service providers in order to prevent tyranny by the small group of companies that give us access to that data. With this book, Wu pivots from that concept to talk more generally about extreme corporate concentration, in which global industry is controlled by a small group of giant firms. Wu argues that what Supreme Court Justice Louis Brandeis called “the curse of bigness” in 1914 is again a major threat, and warns that we need to return to the “trustbusting” values of the mid-twentieth century in order to address growing income inequality.

Lionel Trilling ’25CC, ’38GSAS was a giant of American literary criticism and a pillar of intellectual life at Columbia College for over fifty years. Now Adam Kirsch, a Columbia professor of American studies, has collected 270 of Trilling’s letters (skillfully culled from thousands written between 1924 and 1975), giving us rare insight into the man behind the ideas. In this fascinating volume, we become privy to Trilling’s courtship of his wife; to his battles with depression; and even to some salty exchanges with rivals and former students (Allen Ginsberg ’48CC, to name just one).

Few American families have been chronicled as thoroughly as the Kennedys. But one figure is still relatively unexplored: JFK’s sister Kathleen “Kick” Kennedy. In her heartbreaking debut novel, Kerri Maher imagines Kick’s years as a rebellious debutante in London during World War II. Central to the drama is a star-crossed romance with a Protestant aristocrat — an impossible choice for the Catholic Kick.