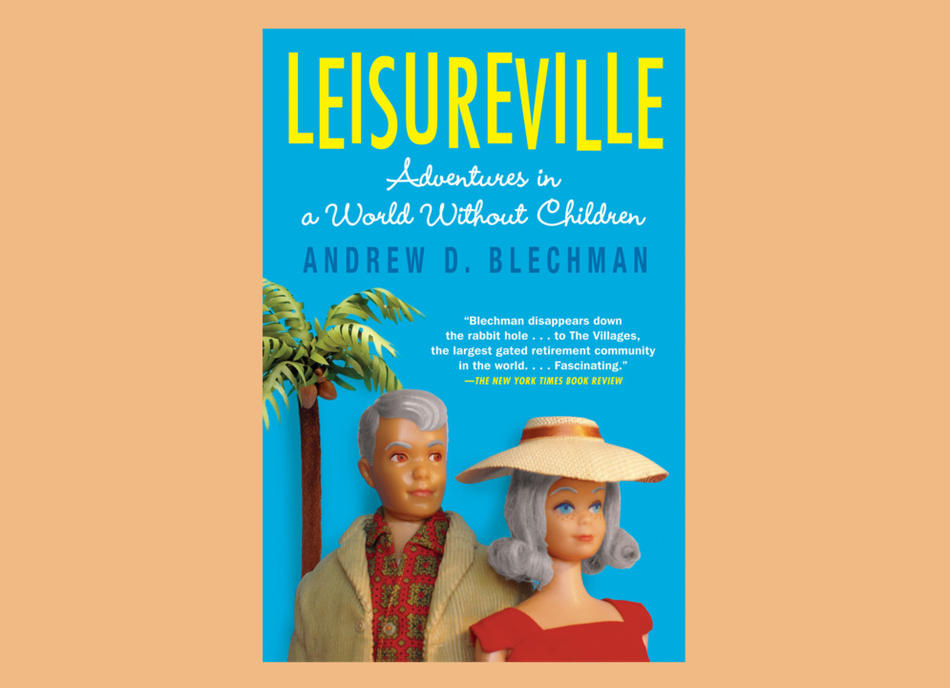 “Welcome to Florida’s Friendliest Hometown!” heralds the entrance to The Villages, a colossal planned retirement community in the center of the state. It houses about 75,000 people and is physically larger than Manhattan. Yet its size is not its most striking feature. The Villages is a lifestyle, one that many seniors (some as young as 55) are eagerly buying into. Boasting numerous country clubs, recreation centers, and golf courses, The Villages also hosts two downtowns, each with its own fake history. Spanish Springs resembles a mix of a Spanish colonial village and an old western town, built where, as The Villages’ legend has it, Ponce de León traveled while searching for the fountain of youth; and Sumter Landing is equipped with a functioning lighthouse that was supposedly built in the 1830s. The Villages promotes a sense of community, security, and the unabashed pursuit of enjoyment.

When his New England neighbors Dave and Betsy, 55 and 62, suddenly moved to The Villages, Andrew D. Blechman ’93JRN (author of Pigeons: The Fascinating Saga of the World’s Most Revered and Reviled Bird) trekked down to check it out. During his monthlong stay, Blechman befriended many of the residents, some of whom had come to The Villages for the weather and community, others for the golf or safe living conditions, and some for the hassle-free lifestyle or low taxes (the residents tend to vote against school-tax proposals). But many seniors, like Dave and Betsy, come because they feel that they have worked hard, made it, and can now relax and do whatever they please — literally. Some golf daily, others take advantage of the free entertainment, and others try to find new love — or, in some cases, simply pleasure.

Blechman goes deep into the phenomenon of major retirement communities spreading across the nation, detailing the development of Youngtown, Arizona, which was begun in 1954 and is considered the first; the Sun Cities, Youngtown’s later neighbors; and The Villages, originally a small trailer park, which soon exploded into the behemoth leisure community that it is now. Blechman also relates his personal experiences as a visitor: being chastised during a game of cutthroat bingo, and getting passed near the links by men in souped-up golf carts. Before long, the author was unsettled by the mandated uniformity, the easy-listening music that’s punctuated by constant reminders of the good life (“It’s another beautiful day here in The Villages”) broadcast through speakers in the plastic rocks along the streets, and the Truman Show–like feeling of being removed from the real world. “I’m oddly comforted by the fact that there’s been continued violence in the Middle East,” Blechman writes on day one of his stay.

More disturbing to him, however, is the exclusion of children and young people, who can visit but had better not try to enjoy The Villages’ hospitality for more than 30 days per year. Whatever the original motivation of the residents to live in these childless communities — the low crime rate, the low tax rates, the quietude, the desire to enjoy themselves or just to be among peers — many of them want to keep their neighborhoods as age-segregated bubbles. So, some residents have turned into child-reporting watchdogs. In addition, owing to the questionable governance of The Villages, a privately owned community in effect run by the developer, seniors are more or less required to relinquish some of their civil rights — an arrangement about which the residents are surprisingly blasé. “Just as long as they keep this place looking so nice, and they keep on building more golf courses, then I’m happy,” reasons Blechman’s former neighbor. As a result, Blechman argues, these communities both permit segregation by age and foster the estrangement of seniors from their original communities, to the detriment of all. They also engender bizarre feelings of entitlement, as an incident in pre–age-integrated Youngtown illustrates: a woman who ran over a child claimed that “the child should never have been crossing the street, because schoolchildren aren’t allowed to live [here].” Blechman’s research and experience justifiably serve to strengthen his aversion: “No clever euphemism can hide the fact that these communities are based on a selfish and fraudulent premise — the exclusion of children and families. And no amount of volunteerism and continuing-education courses . . . can compensate for the high societal price of this exclusionary lifestyle.”

The book ends with a call to action: “We as a nation [must] once again recognize the importance of our elders, whom we often treat less than admirably.” We need to strive to better understand and fulfill seniors’ needs, and to strengthen the ties among the generations, rather than excluding those at either end, Blechman says. He rightly points out the flaws of a culture that doesn’t meet its seniors’ needs and from which seniors who can afford it simply secede. He also presents a strong case for a readjustment of our societal values and behavior as he ponders the future of these gated communities and the communities left behind. (Since publication of the book, the financial crisis has affected many of the communities, some of which are lowering their age limits while others stagnate with unfinished projects. The Villages, meanwhile, has recently encountered trouble with the IRS.)

The book also provides food for thought about subtler, and perhaps deeper, flaws in our society. At one point, Blechman elaborates on our country’s obsession with convenience: “We invented and popularized fast food, drive-throughs, and the La-Z-Boy recliner. . . . So why not build an entire community predicated on convenience — even if it’s an illusion?” Blechman also focuses on the sex lives of the seniors (at times in rather too much detail) as another example of their hedonism. Yet his conclusion, which includes a call for sacrificing for one’s community and its children, would be more comprehensive were he to develop the idea of the need for sacrifice in all areas of both public and private life. Because our need for instant gratification has permeated everything, leisurevilles are just one symptom of this larger epidemic.