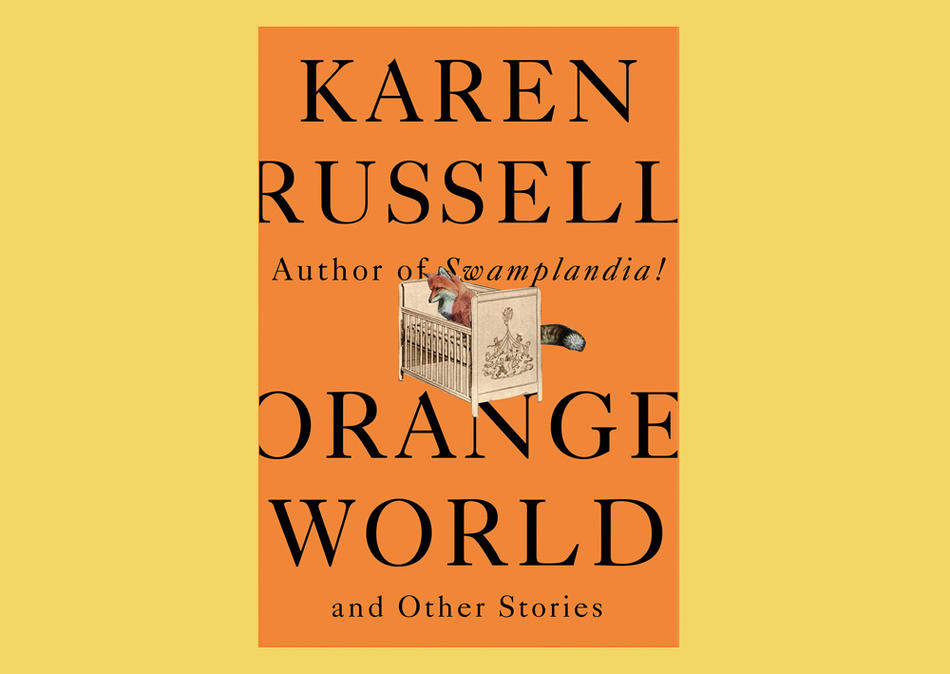 Distilled to their premises, Karen Russell’s stories sound absurd: A grizzled farmer retires after a career spent raising tornadoes as crops. A teenage boy finds a two-thousand-year-old girl preserved in a bog and falls in love. A woman pricks her finger on a Joshua tree and becomes possessed by the plant’s spirit. Yet Orange World, Russell’s fifth book and her third collection of short fiction, is hardly gimmicky. Rather, the eight fantastical stories gathered here are inventive and richly imagined, empathetic and often sly. As a collection, it is nothing short of exhilarating.

Russell ’06SOA, who was a finalist for the Pulitzer Prize in 2012, is known as a master of the surreal and the macabre, and her ability to conjure frightening worlds is again on display here. Russell grounds much of her work in places we can recognize, like a terrifyingly believable postapocalyptic Florida, where children attend school in wrecked cruise liners. In “Black Corfu,” a real village off the coast of Croatia is the home to an unreal situation — a doctor who operates on corpses underground. He snips their hamstrings to prevent the bodies from rising and taking on grotesque new forms.

Someone or something is always transforming in a Russell story, and characters are constantly on the move, often seeking escape from their grim circumstances. In “The Bad Graft,” a young couple from Pennsylvania have decided to run away together on their first date; we meet them in the California desert. “Hadn’t their trip unfolded like a fairy tale?” Russell writes, but — no spoiler here — that doesn’t mean a happy ending. Russell comes from the original fairy-tale tradition, where magic and menace reign.

While the intersection with the otherworldly gives these stories their power, the characters’ preoccupations remain totally familiar and achingly human. The doctor in “Black Corfu” is relegated to working on dead bodies because of his race and class. Blister, an orphan in “The Gondoliers,” chafes under the watchful eye of her three older sisters; her only option is to plunge into toxic waters. Love transforms Cillian, the teenager who has fallen for the bog girl, and his mother can’t square “her knowledge of her sweet, awkward boy with this wayward, confident person.”

In “The Tornado Auction,” a standout story about mortality and remorse, the surreal details are particularly vivid and blood-quickening, though the story also winds back to very relatable anxieties. The hero has spent his life cultivating dangerous celestial patterns for “weather-assisted demolition.” Storms, not horses, fill his stables: “Baby southerlies whinnied around, shrieking their inhuman sounds … What a catalog of weathers my peers were now breeding, dreaming up on their ranchlands.” The farmer nurses a storehouse of familiar regrets — his family, the children he paid little attention to and, more crucially, could not protect.

Russell is particularly well attuned in this collection to the concerns and predicaments of parents — the raw fear that blooms in tandem with the love for one’s child. In the terrific title story, “Orange World,” an expectant mother named Rae makes a Faustian deal: she promises to breastfeed the Devil in exchange for keeping her baby safe. The story showcases Russell’s keen comic touch (“Don’t read anything online,” one mother counsels. “They’ll tell you your baby is going to die and sign off with an angel emoji”). Its resonance lies in its depiction of the desperation and isolation of new motherhood. As one character remonstrates: it’s easier to believe in the devil than “admit that you are powerless like the rest of us.”

The need for connection is the beating heart of a Russell story, and it is only through authentic relationships that characters are able to find peace. In “Orange World,” Rae’s fear abates when she joins forces with a group of women. The farmer in “The Tornado Auction” isn’t as alone as he fears. One character tries to connect with her dog but finds that there’s a problem: “There’s no trouble or sorrow in your life!” Indeed, trouble and sorrow are pervasive connectors in this book. And Russell’s prodigious gifts allow her to tease them out, while uniting us in the most unlikely ways.