Review: "Names on the Land" 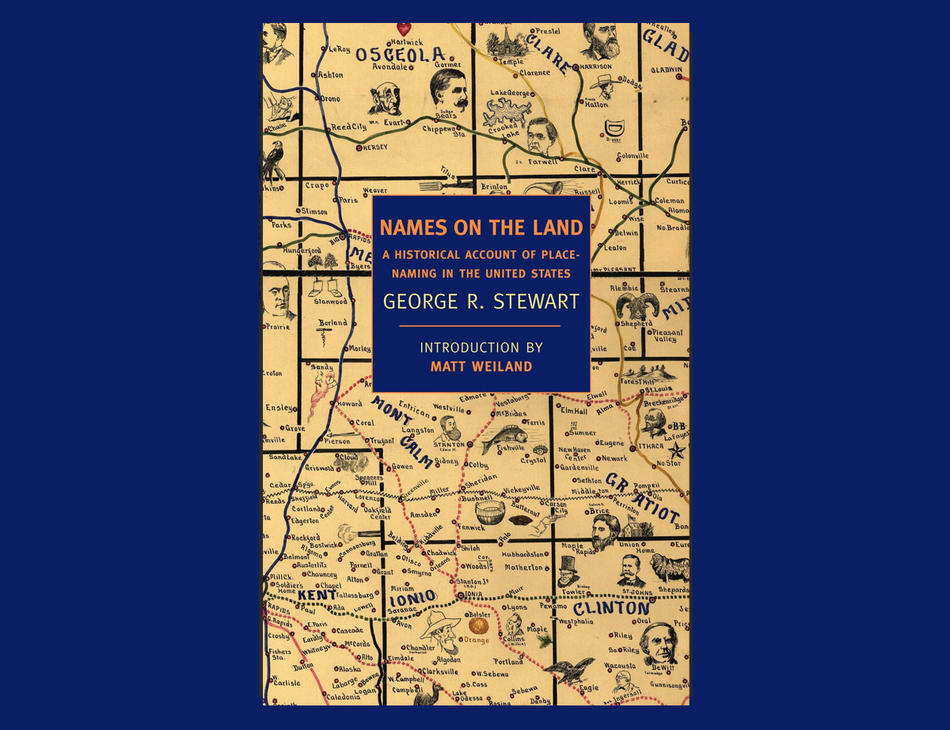 When the Europeans began settling the New World, they found an Eden full of unnamed places.

How the Indians and Europeans put names on this land is the matter of George R. Stewart’s astonishingly but lightly learned study.

I was 10 when Names on the Land came out in 1945, and I devoured it. Reading this new edition 63 years later, I am astonished at how many details have stuck in my memory. Stewart ’22GSAS cast his eye over a wide territory and never seems to have missed a telling fact. His own curiosity must have been vast. After earning his PhD at Columbia, Stewart went on to teach English at Berkeley for more than half a century, specializing in the poetical metrics of ballads and in toponymy, the study of place names. He also produced superb books on many topics, including science fiction.

Names on the Land has as one major organizing principle the various ways in which the nameless land (from the European view) rapidly gained the large number of names needed in the process of exploration and settlement.

The first Spaniards found the New World an Eden full of unnamed places, and many of these were given the name of the saint whose day fell on or near their discovery. At other times and places, the names were more imaginative. Two that have lasted are Florida and California, the former alluding to the flowers that covered the place and the latter to a fictional island said to be ruled by Amazons.

One of the most successful of the explorer-nomenclators was John Smith, whose own plain name belied his taste for polysyllabic and mellifluous Indian names. Among those he put on the land that survive to this day are Massachusetts, Susquehanna, Potomac, and Rappahannock.

Smith was responsible for involving government in the business of naming. In 1616 he prepared a map to accompany his account of his explorations. On this, he placed a number of names, some of his own devising, some derived from those in use by the Indians. He then sent the draft map to the 16-year-old Charles, Prince of Wales, asking him to correct whatever names he found barbarous. The future Charles I thus named the cape 30 miles north of Boston at the northern end of Massachusetts Bay for his mother, Ann of Denmark; Cape Elizabeth near Portland, Maine, for his sister (from whom the House of Windsor derives its hereditary claim); and the Charles River for himself. He also tried to rename Cape Cod (so named in 1602 by the explorer Bartholomew Gosnold) for his father, King James, but this did not stick. The prince replaced Sowocatuck with Ipswich and Accomack with Plymouth, a name shortly to be soldered into our history.

In a scholarly tour de force covering three centuries, Stewart traces the name New York. In the Celtic language of the Britons, eburos meant “yew tree.” A settlement in the north of Britain was named for the yew: Eburacon. When the Romans came, they Latinized this to Eboracum. The man in the street, not fluent in Latin, made this Evoroc. Next, Germanic invaders Teutonized this as Eoforwic, “place of the boar.” (“This was by no means the equivalent of Pigtown,” notes Stewart, “for the boar was a highly respected and dangerous wild animal.”) Still later, the Danes “Scandinavized” the name as Yorvik, the final syllable now meaning “bay.” This eventually was simplified to York. But Stewart is not done: He traces the course of York down to the east bank of the Hudson. In 1664 the English renamed New Amsterdam, the colony they had just captured from the Dutch, for the Duke of York, brother of the king.

Stewart is equally informative and entertaining in a chapter titled, “How Congress took over,” which shows how the Feds put names on the vast new lands acquired through the Louisiana Purchase and the Mexican War. The fashion favored Indian names, and a name like Dakota was in like Flynn. But despite the preference of the settlers at the foot of the Rockies for the Spanish “Colorado” — a term alluding to the reddishly colored water of the river so named — their territory was almost prematurely named Idaho, an Indian word allegedly meaning “gem of the mountains.”

Writes Stewart: “Idaho became the favorite. A local convention accepted it, and the Committee on Territories approved. In 1861, a bill was presented, and everything seemed settled. Underground, however, some influence must have been at work. The Territorial delegate had apparently discovered that the name did not mean ‘Gem of the Mountains.’ Possibly he feared that like many other Indian names it meant something better not translated.” And so at the last minute Colorado became Colorado. But Idaho, whatever it may really mean, got its second chance.

There is nothing in this book that is not a potential source of delight. Lincoln is said to have damned a book with the faintest of praise by saying that people who liked this sort of thing would like it. People who like the sort of thing George R. Stewart did will not merely love this book, but may, as I have, treasure it over a lifetime.