What Old NYC Lumber Can Tell Us About Climate History

Dendrochronologists, or tree-ring scientists, spend a lot of their time hiking through forests, boring holes into trees, and removing long, cylindrical cores to reveal the specimen’s growth rings. Since trees grow vigorously in response to rainfall, the relative widths of their rings from one year to the next provide scientists a unique window into past rainfall levels and a region’s climate history.

But wood recovered from old buildings, boats, or bridges can also be valuable to dendrochronologists. As long as the wood can be dated by comparing its rings with those of younger trees in the scientists’ databases, it can provide even older climate data.

And where do you find lots of old wood? Try New York City, where many nineteenth- and early-twentieth-century warehouses, factories, and row houses contain massive wooden beams and joists.

“New York City is a huge repository of old timbers, probably the biggest in the country,” says Mukund Palat Rao ’20GSAS, a postdoctoral researcher at Columbia’s Tree-Ring Lab, which is part of the Lamont-Doherty Earth Observatory. Yet because historic preservation has never been one of New York City’s strengths, about one thousand wood-frame buildings are demolished or gut-renovated every year, the materials mostly going to landfills.

A team of Columbia tree-ring scientists is now harnessing this destruction and mining those torn-out timbers for information. “It’s an amazing resource for science,” says Rao. With the help of the Brooklyn-based company Sawkill Lumber, which salvages and resells vintage wood, the researchers are collecting and analyzing samples of old beams in hopes of increasing their knowledge of North America’s climate over the past millennium. To date, the Columbia scientists have amassed wood from eighteen local structures, including the recently renovated 1891 Terminal Warehouse in Manhattan’s Chelsea neighborhood; a circa 1831 commercial building demolished in the Financial District; and the demolished nineteenth-century parish house of St. Mary’s Episcopal Church in Brooklyn. They have discovered that some of the recovered lumber dates as far back as the early sixteenth century, having been harvested from 250-year-old white pines that were chopped down in New York’s Adirondack Mountains in 1789.

“There is a lot of history locked up in those timbers,” says Caroline Leland ’19GSAS, also a postdoctoral researcher at the Tree-Ring Lab. “It’s really difficult to find living old-growth trees in the eastern United States now. If we can get enough samples, it may allow us to develop a better understanding of the long-term climate in the regions these trees come from.”

Rao, Leland, and several other Columbia dendrochronologists, including Tree-Ring Lab director Edward Cook and Milagros Rodriguez-Caton, have now joined with Sawkill Lumber co-owner Alan Solomon to launch a nonprofit aimed at promoting the preservation of old lumber in New York. They are also talking with a small group of local engineers and architects who want to lobby the city for an ordinance that would identify historic timbers uncovered in demolitions and require companies to contact salvagers.

“I’d like to see information from a big network of buildings,” says Leland. “We could develop a sort of history of the urban forest.”

This article appears in the Winter 2021-22 print edition of Columbia Magazine with the title "In old NYC lumber, researchers find clues to region’s climate history."

6 Things You Need to Know About Climate Change Now

With global warming now a full-blown crisis, Columbia experts are documenting the dangers and developing solutions 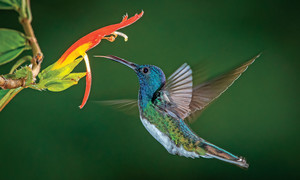 The Amazing Gender-Bending Behavior of Hummingbirds