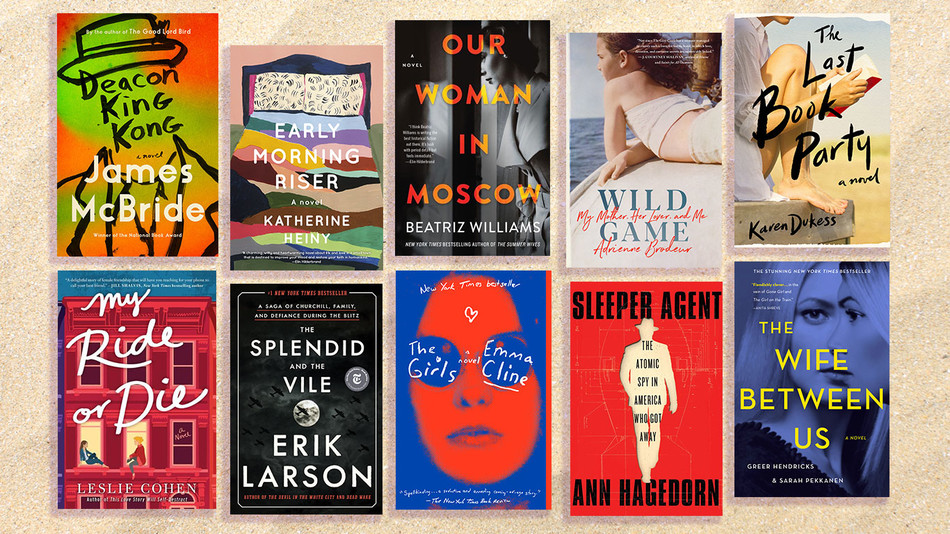 It’s been an unusually stressful year, and because we’re all owed a little downtime, we’re sharing our list of summer reads by Columbia alumni. Some books are new releases, others are old favorites, all provide some much-needed escapism.

When George Koval — an Iowa-born, Columbia-educated scientist — was drafted into the US Army in 1943, he landed a top-secret assignment with America’s atomic-bomb development program. But Koval was leading a double life, and for the duration of the war he passed highly sensitive information to the Soviet military. While Koval was one of many Russian spies active during World War II, he was the only one to infiltrate the Manhattan Project, which likely altered history. Ann Hagedorn’s book is entirely true but so compelling that it reads like a classic spy novel.

When second-grade teacher Jane locks herself out of her new house one night, she falls hard for Duncan, the charming locksmith who comes to her rescue. So begins Katherine Heiny’s bright, witty novel about love and life in small-town Michigan. Jane is soon contending with Duncan’s flock of former girlfriends, his needy ex-wife Aggie, and his well-meaning coworker Jimmy. With a cast of eccentric, likable characters and spot-on dialogue, Heiny creates a narrative that is alternately hilarious and heartbreaking but always filled with hope.

Deacon Cuffy Lambkin — or Sportcoat, as he’s known around his Brooklyn housing project — is a “walking genius, a human disaster, a sod, a medical miracle, and the greatest baseball umpire that the Cause Houses had ever seen.” But one evening in September of 1969, Sportcoat shoots the project’s biggest drug dealer, setting in motion a convoluted (and often darkly funny) chain of events. Sportcoat is one of James McBride’s most memorable characters, and the world that he inhabits is richly, perfectly drawn.

For Adrienne Brodeur, summers meant bike rides on Cape Cod, lobster dinners on the beach, and — starting when she was fourteen years old — helping her mother, Malabar, cover up a passionate extramarital affair. Malabar’s lover, Ben, was her husband’s best friend, and the author’s involvement in the situation got even more complicated when she fell in love with, and eventually married, Ben’s son Jack. Brodeur’s dramatic memoir makes for a perfect beach read; the fact that the soap opera is true makes it all the more compelling.

America has long been fascinated by the evil deeds of Charles Manson and his power over a band of wayward teenage girls. In her bestselling novel, Emma Cline imagines in rich detail what it was like to be one of them. Her heroine, Evie, is navigating typical teenage angst when she is drawn in by an alluring Manson-like cult. Following her from her quiet suburban life to the brink of violence is utterly absorbing. Read our 2016 review.

Our Woman in Moscow

It’s 1948 — the dawn of the Cold War — when American diplomat Sasha Digby, his wife Iris, and their two children vanish without a trace. Two possibilities emerge: either they were kidnapped by Russian spies or they went into hiding. Four years later, Iris’s estranged twin sister, Ruth, gets a postcard from Iris and hatches an elaborate plan to find her. But as the complicated truth comes out, both sisters will have to choose where their loyalties lie. Beatriz Williams is the author of the New York Times bestseller Her Last Flight, and her latest is every bit as gripping and evocative.

It’s the summer of 1987 — a time when book publishers still took three-martini lunches and threw lavish launch parties. In Karen Dukess’s charming debut novel, we see this world through the eyes of Eve Rosen, a floundering editorial assistant who takes a job on Cape Cod as the research assistant to a famed New Yorker writer and finds herself entangled in a complicated web of romantic relationships. Dukess herself worked at Little, Brown in the eighties before becoming a newspaper reporter and then a speechwriter at the UN — and her novel is brimming with nostalgia for an era when authors were celebrities and books were beloved.

The Splendid and the Vile

Erik Larson, the mega-bestselling author of The Devil in the White City and Dead Wake, is a master of looking at history through a novelistic lens, and his intimate portrait of Winston Churchill ’46HON during the Blitzkrieg is no exception. Much has been written about Churchill the statesman, but here Larson imagines not just Churchill’s top-secret war-room meetings and his complicated and important relationship with Franklin D. Roosevelt ’08HON but also his tenderness towards his family, his deep empathy, and his surprisingly playful sense of humor. It’s an engrossing, epic read. Read our 2020 review.

The Wife Between Us

Don’t expect another thriller about a jealous ex-wife. As the jacket copy warns, it’s best to assume nothing. Greer Hendricks and Sarah Pekkanen first met more than a decade ago, when Hendricks became Pekkanen’s editor at Simon & Schuster. They’ve gone on to become a solid writing team, with three novels to their credit, but their debut effort, a wickedly clever mind-bender in the tradition of Gone Girl and The Girl on the Train, is still one of our favorites.

My Ride or Die

Who ever said a love story had to be romantic? In her latest novel — a funny, touching tribute to the power of female friendship — Leslie Cohen writes about Sophie and Amanda, lifelong pals who decide to give up on the hunt for the perfect man and instead build the perfect life — with each other. But perfect men have a way of appearing at exactly the wrong time, and when a casual fling turns serious, all their plans are called into question.

What’s your favorite book by a Columbia author? Let us know at feedback@columbia.edu.

Top Stories
You’re Not Imagining It: Seasonal Allergies Are Getting Worse
Lets Talk About Sex on YouTube
10 Travel Books to Feed Your Wanderlust
10 Uplifting Photos from Columbia’s 2022 Commencement
Second Acts: It’s Never Too Late to Go Back to School
All categories >
Read more from Rebecca Shapiro