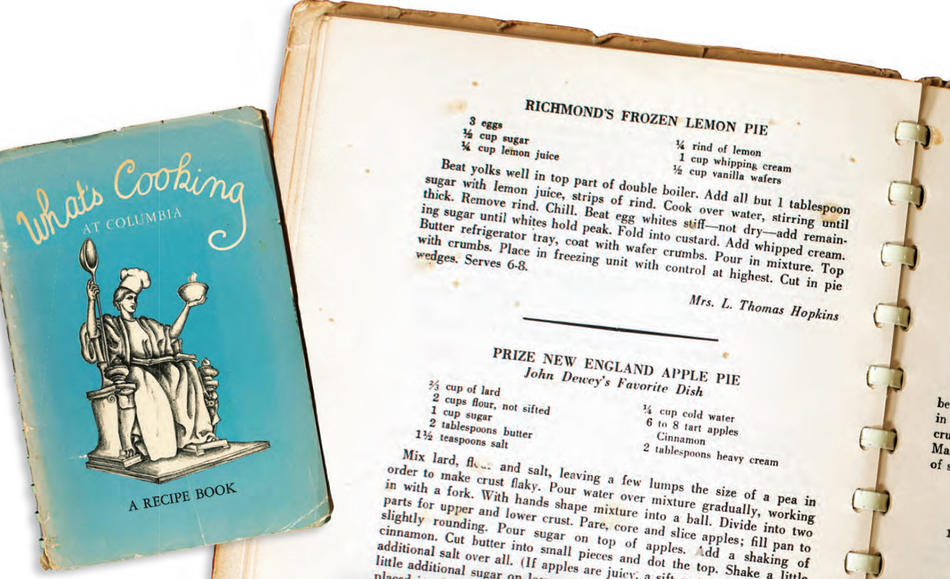 John Dewey, the great education reformer, liberal philosopher, and Columbia professor, frowned upon patriotism and nationalism. But when it came time, in 1942, to volunteer a personal recipe to a cookbook whose sales would support the war effort, Dewey’s offering was unimpeachably red-blooded.

Or was it blue-blooded? For this was a Columbia cookbook — a copy of which has recently surfaced on eBay, like some culinary time capsule. The book, a 1948 reprint of the wartime edition, is filled with dishes that largely evoke a mid-century, Anglo-American cuisine stuffed with nut breads, ham loaves, and upside-down cakes, and exotic fare such as Mrs. N. M. McKnight’s “tropical stew.” The recipes were submitted not by faculty and administrators so much as by their wives, like Mrs. Merle Curti (“Auntie Holden’s cherry cake”), Mrs. Nicholas Murray Butler (egg croquettes), Mrs. L. Carrington Goodrich (“chop suey for children” — Professor Goodrich was a scholar of Chinese history), Mrs. Enrico Fermi (“chocolate dessert”), and Mrs. George T. Renner (beef stew with dumplings) — more “Mrs.” than hits, you might say, assuming you are watching your trans fats.

Professor Dewey was one of the few male gourmets represented, joining the likes of Columbia president and World War II general Dwight D. Eisenhower (his vegetable soup leads off the revised edition) and dean Harry Carman (griddle cakes). Below is Dewey’s recipe for his favorite dish, which, in the spirit of his progressive-education philosophy, you can learn by doing. That is, if you don’t mind a little lard.

Yes, That Happened: Columbia Football Was Once Top of the Ivies

Sixty years ago, a group of talented Lions brought pride to Morningside Heights

Hanging Out at the Hungarian Pastry Shop

With Plan 2030, the University strives to achieve net-zero emissions by mid-century