Kennedy, Khrushchev, and the Most Dangerous Place on Earth. By Frederick Kempe '77JRN (G.P. Putnam's Sons) 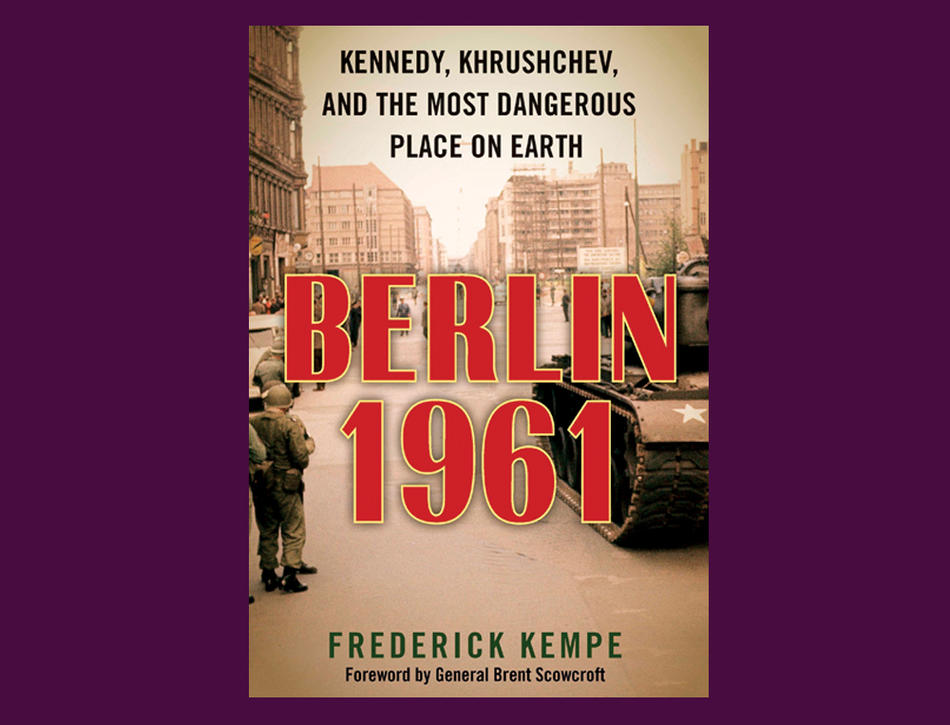 At midnight on Sunday, August 13, 1961, three siren blasts roused the East German border police. They gathered before their company commander and got their orders. An hour later, Berlin’s dark streets filled with armed soldiers and police officers, unspooling barbed wire and stretching it between wooden sawhorses and concrete posts. Subway and trolley lines were cut. At dawn, a wall began to rise. The US chief of mission in West Berlin, in hapless understatement, told his colleagues, “Something seems to be happening in East Berlin.”

Families waved pathetically to one another across the demarcation line; East Berliners jumped from apartment houses on the border into the nets of West Berlin firemen; desperate swimmers under gunfire made a dash for the western bank of the River Spree. West Berliners, stunned to find themselves imprisoned, had to be held back by their own police from attacking East German forces. President Kennedy, vacationing in Hyannisport, kept an increasingly loud silence as West Berliners went from dismay to outrage: why did the Americans not demolish this wall?

Thereby hangs a tortuous tale, well told by Frederick Kempe, the onetime Berlin bureau chief of the Wall Street Journal. In Berlin 1961: Kennedy, Khrushchev, and the Most Dangerous Place on Earth, Kempe ’77JRN conveys the anxieties of the period as Berlin became a crucial site of struggle between the superpowers. This drama played out in human terms as a fraught confrontation between two men who could not have been more different in background and disposition. Khrushchev was a self-made Soviet man, the son of a coal miner, who had risen to power as a protégé of Stalin. He had risked much in speaking out against Stalin’s legacy after his death and instituting internal reforms and a policy of peaceful coexistence with the West. But results had been mixed: Khrushchev’s ambitious plan to raise Soviet living standards through agricultural production had amounted to little, and he had let his temper sabotage a summit with President Eisenhower. Alternating aggression and conciliation, Khrushchev was impulsive and obsessed with his nation’s standing. The Stalinist old guard saw him as weak, ripe for removal. Kennedy was an American patrician who in his first seven months in office had yet to acquire the respect of the nation’s elites. His fluent charm concealed a great deal of inner doubt and physical pain requiring constant medication, as Robert Dallek ’64GSAS explored in a 2003 biography.

Two months before Khrushchev ordered the construction of the wall, at the German Communist regime’s urging, Khrushchev and Kennedy met in Vienna. Kennedy was seeking a modus vivendi in the Cold War, but he also needed short-term successes to shore up his standing in Washington and on the world stage. Khrushchev thought Kennedy weak for having accepted defeat in April 1961 following the Bay of Pigs fiasco.

The Vienna summit began cordially enough, but it soon unraveled. When Kennedy asserted the Allied claim to West Berlin, Khrushchev reddened and waved the threat of war. “The US is unwilling to normalize the situation in the most dangerous spot in the world,” he sputtered. “The USSR wants to perform an operation on this sore spot — to eliminate this thorn, this ulcer ... Any violation of [East German] sovereignty will be regarded by the USSR as an act of open aggression.” Kennedy, who had hoped to make progress on nuclear arms control, was shocked by Khrushchev’s intransigence. He had ascertained that there was no middle ground between refraining from using nuclear weapons and destroying the entire planet. When the New York Times reporter James Reston asked him how the summit had gone, Kennedy told him, “Worst thing in my life. He savaged me.”

Kempe tells the story with knowledge and flair, but the book is skewed by his disdain for Kennedy, whose first year in office was defined, in Kempe’s words, by “inconsistency, indecision, and policy failure.” Kempe excuses Khrushchev in light of the constraints working against him, without acknowledging the parallel constraints on Kennedy. True, Khrushchev was limited by a faltering economy and Chinese Communist opposition, but Kennedy was buffeted not only by his Republican critics but by US military commanders and many Democrats. Kempe describes Kennedy’s bargaining as capitulation: “The consistent message he had sent Khrushchev ... was that the Soviet leader could do whatever he wished on the territory he controlled as long as he didn’t touch West Berlin or Allied access to the city.” But in defending West Berlin, Kennedy was defending a Cold War border. In fact, as Khrushchev continued to insist that the Allies leave West Berlin, Kennedy asked his advisers to plan a limited nuclear attack on the Soviet Union.

“A wall,” Kennedy famously told his aides, “is a hell of a lot better than a war.” Kempe argues that Kennedy’s acceptance of the wall was weakness, not strategy. He tells the story of a dramatic October 1961 face-off at the legendary crossing point Checkpoint Charlie as an example of the sort of conflict that the wall failed to prevent: an armored ballet of opposing US and Soviet tanks, which backed down only after discreet negotiations. More accurately, it was an event precipitated by Soviet fear that the US might try to tear down the wall. With the wall accepted, both sides reduced their armed forces in East and West Berlin to token contingents.

Kempe depicts Khrushchev’s reckless act of sending nuclear missiles to Cuba in 1962 as a consequence of Kennedy’s failure to demolish the wall and praises Kennedy for finding the courage to face down Khrushchev in 1962 as he had failed to do in 1961: “Khrushchev backed down in Cuba once challenged by a decisive Kennedy, exactly as General Clay had predicted he would a year earlier in regard to Berlin.” But this is the wrong lesson: there is no evidence that Khrushchev would have backed down in 1961 if the US had attempted to demolish the wall. Both men had learned from the past year. Kennedy’s success in Cuba was greatly aided by Khrushchev’s realization that he had started something that he could not finish. Khrushchev and Kennedy looked into the abyss — and pulled back.

The German Communists saved their state. But in the end, Gorbachev’s reforms, the abdication of the Polish Communists, and the East German regime’s endorsement of Chinese repression in 1989 generated the protest that swept the regime aside. Before that, Willy Brandt, then West Berlin’s mayor, had persuaded the West Germans to accept the new map of Europe and to work for change through contact and not confrontation.

Change came first in West Berlin itself. The city provided a full-employment program for the conventional ideologues of the “free West.” However, since West Berlin was administered by the Allies and therefore not a full legal part of West Germany, its younger citizens could not be drafted. Thousands came to study at its universities — and to enjoy its mixed Turkish, working-class, and bohemian neighborhoods. An oppositional culture developed, from which both the Green Party and the peace movement grew. These were the benign consequences of the Berlin situation. Kempe’s book is a vivid record of days when the division of the city seemed anything but benign. What would have happened had Kennedy listened to Clay and tried to tear down the wall? No one can say, but the president’s warm reception in Berlin in June 1963 suggests that the West Berliners were quite satisfied with what he had accomplished. I happened to be visiting my wife’s mother in East Berlin that day, and I recall the massed Eastern border guards at Checkpoint Charlie laughing when my four-year-old daughter asked if they had assembled to see President Kennedy. They came to attention and saluted when he climbed the observation platform at the checkpoint. East Berliners, kept blocks away, cheered him. Survivors of danger, the Berliners on both sides knew a hero when they saw one.

Norman Birnbaum is a University Professor Emeritus at Georgetown University Law Center. In 1986, the government of the German Democratic Republic barred him from its territory for three years “for conspiring with enemies of the state.”